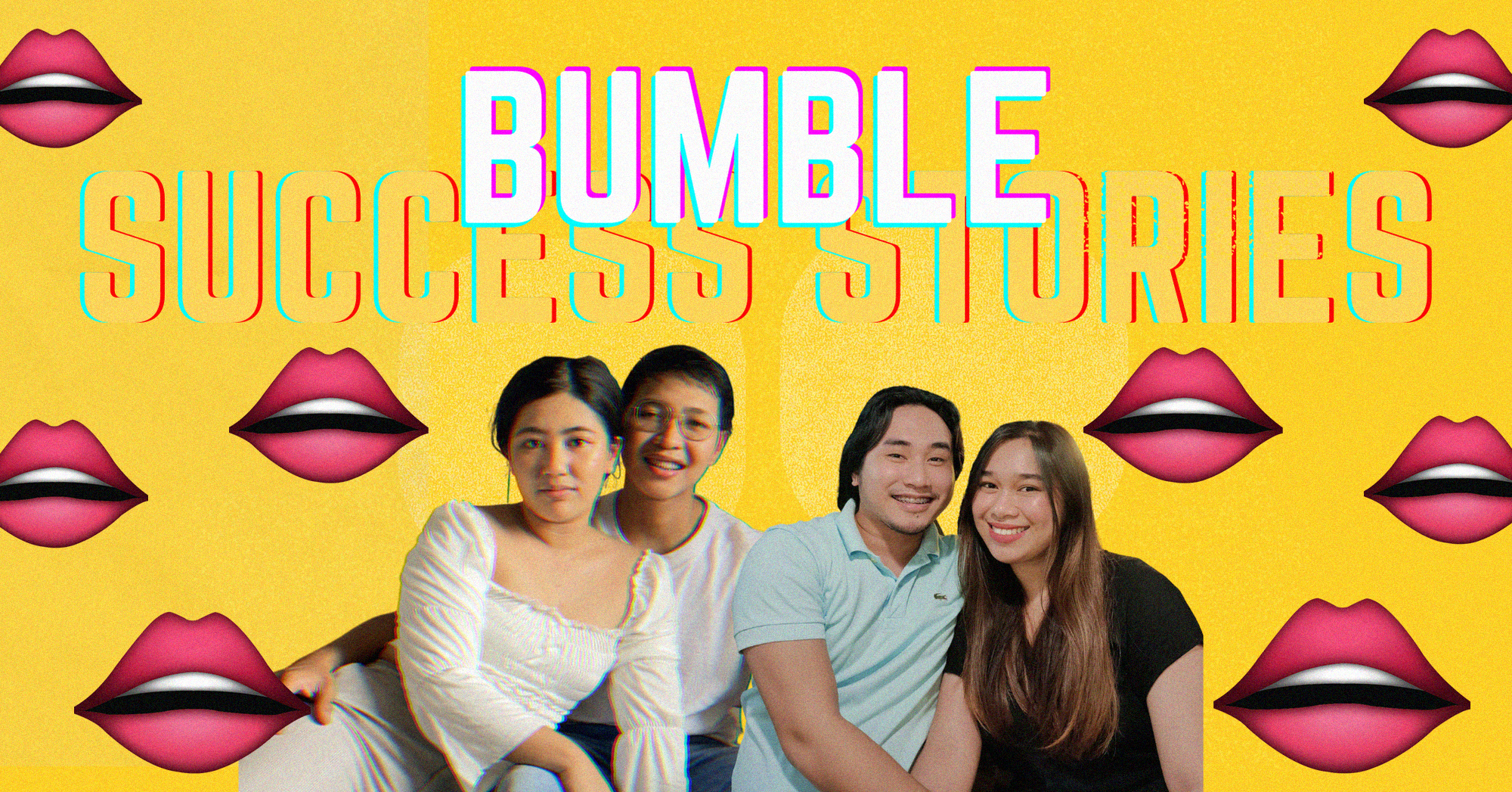 Should Women Make the First Move? Let These Bumble Success Stories Convince You

Bumble is in the business of making romance equal for all

As a young woman influenced by a conservative, religious upbringing, I was taught to wait. Women were meant to be wooed and romanced; it was a man’s job to actively seek out and pursue a relationship. I was taught to be passive and maybe—just maybe—with my “gentle and quiet spirit,” I might actually catch somebody’s attention. Dating was a myth. I embraced singlehood with open arms, believing that if I made the first move by acting on my desires, I was soiling my womanhood.

This was paralyzing, to say the least. It was only during the pandemic, wherein I was forced to evaluate these so-called “virtues,” did I realize that I had the power to take control and narrate my own love story. After years of being in denial, I decided to sign up for the women-led, women-first dating app, Bumble.

I am not alone. In a recently concluded study for Bumble’s The Romance Gap campaign, men are still expected to take the lead when it comes to relationships. 62% of people surveyed believe that men should initiate asking the person out and leading when it comes to dating. A quick Google search on “initiating the first kiss” leads to an article that states, “Do not make the first move. If you do, it will destroy his masculine ego and make him unsure of himself.”

Bumble is in the business of making romance equal for all. If you’re still on the fence about online dating, here are success stories—as told from the female’s POV—to encourage you to make the first move. 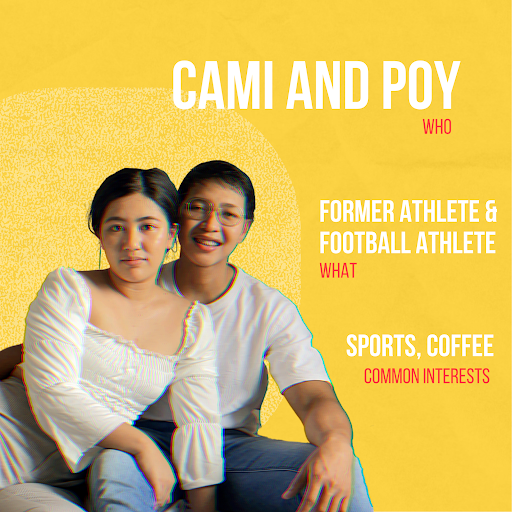 Cami and Poy met through the online dating app a few months into the pandemic. Living and working in close proximity to each other allowed them to connect, especially under such strange circumstances. As athletes and lovers of sports, they found common ground.

Cami reveals, “[On] the first week of us talking, I got busy with my small business and kinda ghosted him. A few days passed, and he reached out again, sending me YouTube links that he [thought I could] relate to. It was such a nice gesture, so we started talking again.”

After a month of talking and getting to know each other, Cami and Poy finally decided to meet up in June. She shares, “He first suggested to jog around BGC [for] our first date, and it was a crazy idea at the time, because [I knew I couldn’t] keep up with a football player. I suggested we get lunch instead, so we ate in SM Aura’s food court as there [were] limited restaurants that [accommodated] dine-in [guests]. We decided to get coffee after lunch and walked around BGC ’til sunset. It was a nice first date because we just spent the day talking and sharing stories.”

Since that fateful first date—aligned by the stars and Bumble’s algorithm—they’ve been inseparable since. She gushes, “We now jog every morning and have coffee dates on weekends just to talk about random things, even though we see each other every day.”

On Making the First Move with Bumble

There’s merit in making the first move, and for Cami, it’s allowed her to meet her perfect match. Friends even tell them they’re starting to look alike! She shares, “Since [we met], we’ve always been vocal about what we feel, and I have Bumble to thank for that. A relationship that doesn’t make you [second-guess] everything is so comforting.” 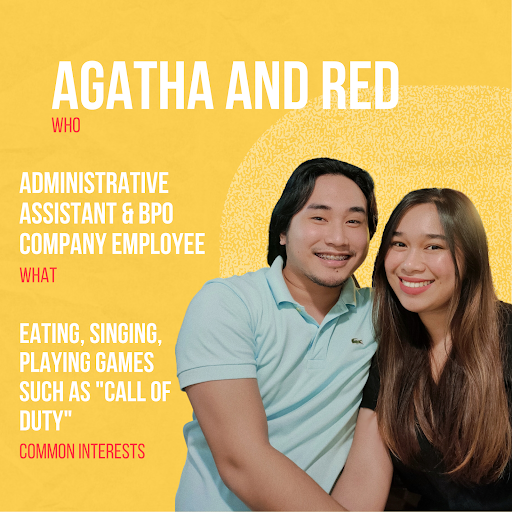 For many people who meet on Bumble, they start from scratch. For Agatha and Red, they realized from the get-go that they had common friends. They both weren’t looking for anything serious either. Agatha was simply looking to make friends, and this made a lasting impression on Red. She recounts, “[At the time], we both [were] into making friends and connections that we [could] meet right after the pandemic. Of course, as expected, we both had ‘failed conversations’ with people, which we both made fun of.”

She emphasizes, “I wasn’t the type to reply fast, too, because I don’t like people who rush things just because they want to have ‘quaranflings.’ I think this made an impression [on] him—that I’m more into [establishing a] friendship than [seeking out] a relationship.”

After a month and a half of chatting online, the two became closer and more comfortable with each other, even being likened to best friends. “He knew all my failed ‘quaranflings,’ I knew his. We became each other’s go-to person. After some time, we had heart-to-heart talks regarding the pandemic, quarantine, and how people our age weren’t that serious about committing [to] a relationship,” Agatha reveals.

In time, they decided to be “more than friends.” Agatha found security and comfort in Red’s presence. She notes, “He didn’t miss a chance to check on me each day. I felt important, felt secure and felt happy having him [around].”

With genuine friendship as their foundation, fast forward to 2022, and the couple will be celebrating their second anniversary in September!

On Making the First Move with Bumble

For Agatha, she isn’t exactly the biggest fan of making the first move. She had serious doubts about downloading the online dating app, but her colleague kept pushing her to try it. Now she sees it was worth the risk. She divulges, “Sometimes you have to do it—take a risk—even without knowing what comes after. Who knows if the result will fail or work, right? You have to do it to know.”

Their success story wouldn’t be possible if she didn’t go out of her comfort zone and make the first move. Agatha shares, “We didn’t really see this [relationship] coming, but we’re lucky to have found each other on the app. Nothing good comes easy, but I can see myself being with him for the rest of my life. And that’s our #BumbleSuccessStory. 💛”

RELATED: Modern Love: Here’s Why Young Filipinos Are Choosing to Cohabit Before Marriage

Learning how to make the first move in relationships has definitely trickled down to other parts of my life. I am more certain of myself, and of the space I occupy. I am still on the road to unlearning damaging ideals I’ve upheld for a long time. But I’m on my way there, and I like who I’m becoming.

Special Thanks to Bumble Philippines