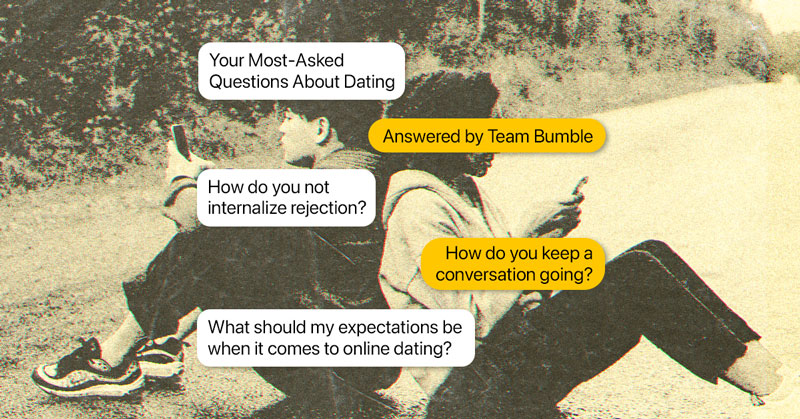 There’s definitely no better time to start dating than now. After two years of self-isolating, maybe even tiptoeing around the idea of getting involved with someone, Filipinos are ready to reignite romance this holiday season. With tactless remarks thrown around family gatherings like “Single ka pa rin (You’re still single?)” or “Wala ka pa ring jowa (You still don’t have a partner?),” two out of five Filipinos are ready to date—and maybe even fall in love. So: hello, Bumble.

We’re no longer wearing rose-colored glasses, and we’re being more cautious when it comes to dating—especially in navigating the tricky realm of online dating. At the recently concluded Come Holi-date With Bumble, we caught up with the team behind the women-first and women-led platform.

You asked and the dating experts answered. Lucille McCart, Bumble APAC Communications Director, shares her thoughts on your most-asked questions about dating so you can set boundaries, avoid being burnt out and lead with kindness.

RELATED: Who Should Pay On A Date? Here’s What The Dating Experts Say

Wonder: What should my expectations be when it comes to online dating?

Lucille: I think [when it comes to] online dating, you get out what you put in. So if you put in the effort, take the time to match with people, start conversations and be engaged, then you are generally rewarded for that behavior. If you take a low-effort approach, you will probably get that back. You’re not gonna meet an amazing person if you spend five seconds putting your profile together and swipe a bit mindlessly and don’t put the effort in.

Your effort is rewarded, in terms of how engaged and how intentional you are, so that would be my starting point. But also, if you aren’t in the mindset where you can put in the effort and be intentional, you can use features like Snooze Mode because not everyone is in the mindset [to date] seven days a week. You basically pause everything, and you can come back a week later to try again.

W: How do you get back on dating apps when you’ve been traumatized before?

L: It’s really hard if you’ve had a bad dating experience. It’s important to be kind to yourself and take it at your own pace, but also, put yourself out there in a way that feels safe to you. You’re not obligated to act a certain way, to share information you don’t want to share or to do anything you don’t want to do.

So if you’ve had a bad dating experience and want to dip your toe in, you don’t need to overshare and you don’t need to necessarily go on a date right away. Maybe your goal-setting could be “I’m gonna have a nice conversation with someone and view that as a success,” and then work your way up to meeting someone IRL. You don’t need to put all that pressure on yourself right away.

W: How do you become better at chatting with your matches? How do you keep the conversation going?

L: [Bumble’s] Question Game is really good with that because it gives you jump-off points to start with. One of the questions might be “What do you like to do on a Sunday afternoon?” and then if they say “Watch films,” you could be like, “What’s your favorite movie?” or “Who’s your favorite actor” or “What’s the best movie soundtrack?”

When you’re getting to know each other and you feel like you have nothing left to say, do fun stuff like that. Ask crazy questions that reignite the conversation because then they lead to follow-up questions.

W: But do you acknowledge that there are just conversations that just don’t seem to do well no matter how hard you try? How do you communicate a lack of interest or reject someone gently—rather than just leave them “on read” or ghost them?

L: Ghosting is a weak response. If you’re doing it or it’s been done to you, you know that it’s taking the easy way out of a conversation; but you can tell someone you don’t want to talk anymore or you don’t want to date them in a kind way. It is perfectly acceptable. I think we also get scared that doing that is mean, but it’s meaner to just cut off all contact.

It’s easy to just say “I really enjoyed this conversation but I actually don’t feel like we’re connecting, I wish you all the best” or “I don’t think we would be a romantic match so if we keep talking, for me it would be just as a friend.”

How they respond tells you whether you’ve made the right decision as well. If they have an angry response to you being kind, that’s on them. The good thing about doing it that way is that sometimes, you can then transition it into a friendship. It doesn’t have to be romance or nothing—there’s just so much in between.

W: How do you not internalize rejection when it comes to dating?

L: I don’t think that’s something that anyone really masters because it always stings a bit. It’s never nice to feel like you haven’t been picked by someone. Dr. Margie [Holmes] said it the best, “You don’t like everyone, so not everyone’s gonna like you—and that’s okay.”

I also think that if we’re talking about taking a goal or an approach to dating, if you want to go on dates or if you want to have a relationship, someone telling you “I’m not that person for you” [is] great because it clears the path to match with someone else or talk to someone else and date someone else.

If you don’t get rejected by someone who doesn’t want to date you, you can end up investing so much time in something that doesn’t end up going anywhere so you, ultimately, are actually better off being rejected. It’s really hard not [to take] it personally, and it takes a bit of practice. It takes you building up that confidence as well, but it is a gift when you think about how it can open up more opportunities.

W: How would you define a “Bumble success story?”

L: If you only view success as finding the person you’re going to marry, then that means you won’t have “success” until you get married. I’ve had dates with people where I’ve been, like, “I don’t want to date you as a romantic partner, but we had a really fun time” or “We don’t suit each other but it was fun to date for a few weeks.” That’s not a failure. If you view everything that ends as a failure, then you’re going to wait a really long time to feel like you’ve had success.

With the holiday season fast approaching, we’re more than ready to start dating again. It’s time to make the first move on Bumble!