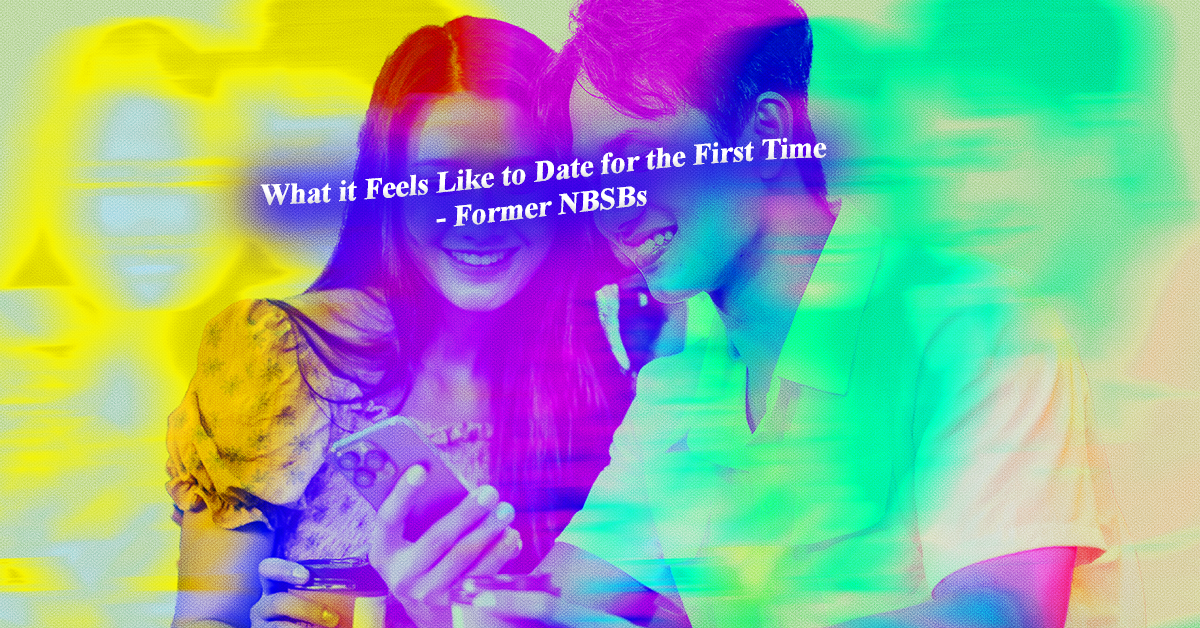 Here’s What it Feels Like to Date for the First Time, According to Former NBSBs

As we grow up, we get to experience different forms of love. We’ve been tickled pink with childhood infatuation with our first-ever crushes, got butterflies while fronting persistent denial in the face of teases and taunts from classmates. We have parasocial affection for the idols and celebrities that adorn the walls of our rooms. (Maybe we’re that person they would fall head over heels for in the midst of a crowded concert, you know?) We experience youthful affection for our first loves that, more often than not, start out as puppy love and end in teenage heartbreak.

Transitioning from our teenage years and into our twenties feels weird in the sense that you’re suddenly allowed—encouraged even—to date when you’ve been told by parents and teachers that it should be the last thing on your mind all your life. “Aral muna bago love life (Study before putting your love life first),” am I right?

A feeling that the NBSB (No Boyfriend Since Birth) nation is all too familiar with is being left behind. They’re well-versed with bitterness from seeing love all around. They’re expert third-wheels. But when they finally get into their first relationship, everything changes. Love finally makes sense.

We asked former NBSB individuals about their experiences of getting into a relationship for the first time. Here’s what they have to say:

Wonder: How did you meet your partners?

Dana: We met at the weirdest time because it was finals week for [my university], and since I was a graduating student, I never expected to meet [Daniel] then. At the same time, I’m glad I met him at that time. Had we met [earlier], I probably wouldn’t have had time for him because of my other commitments, such as org work and internships.

We met through a mutual friend who introduced us to each other! Her boyfriend has been best friends with my boyfriend since high school. We met each other last May, and we kinda went the traditional way of making ligaw (courtship) 😆🙈 He asked me if he [could] court me then he asked my parents as well.

Venice: We met each other when I was in Grade 9, and [Joshua] was in Grade 11. We were both on the debate team (but not as teammates). Then, as we began to compete in other countries together, that’s when my feelings began to ~develop~

Wonder: How did you realize you liked each other?

Dana: We actually clicked immediately because our personalities are really similar! When we first met, I had finals that month, but I always made time for him 🙈 He’s maloko (playful) and funny, and I’m also like that. He’s really patient with me ‘cause I’m super kulit and hyper 😆 It was so easy to talk and get along with him.

It might sound so holy but I literally prayed for a sign 😆 I asked God that if he’s really for me, he’ll ask to pray with me. And he did! After less than a week of knowing him, he asked if we could pray together, which was whack.

Venice:  So, our first competition was in Taiwan. I was still so shy to make friends with anyone because I was the only one in my batch on the team at that time. But since I was teammates with Joshua’s batchmates and barkada (friend group), I kinda got to talk to him also.

On the last day of our Taiwan competition, we were paired up together like a buddy system to explore the night market together. At this point, I already kinda thought he was cute but had no real interest or anything.

I got really thirsty that time and none of the stalls were selling water. Joshua was really determined to help me find water and went out of his way to ask all the stalls and whatnot. I felt kilig because he was so caring. In the end, he offered me his water (despite having a cough and told me I shouldn’t drink it, but I just drank it anyway) since we weren’t able to find a store. That was the start of my liking him.

Wonder: How did you guys get into a relationship?

Dana: From the start, he told me to tell him when I was ready for a relationship because he didn’t want to rush me or pressure me to say yes. He said that he would just wait for me to say yes whenever I wanted to, which I really appreciated.

After a month of knowing him, he asked me to go watch LANY with him. At that time, honestly, I was hesitant to go and confirm plans with him that far ahead. It was only June then and the concert was in November.

I actually kinda planned to say yes during the LANY concert, and I did!

Venice: When we got back from [another competition in] Vietnam, I joined the orchestra to ~of course~ get closer to him. At this point, his best friend knew that I liked him and was trying to get him to confess also.

As time went on, he finally realized it and confessed to me (a little pathetically) through chat. He lowkey friendzoned me first, then said we should just see how it goes—and we went with it! So here we are now, five years into the “relationship.”

Wonder: How does it feel like to be in a relationship for the first time after being NBSB?

Dana: It feels weird, but in a good way! I’m used to being independent. I solve my own problems and don’t usually update anyone and spend time with K-pop boys or K-dramas. Now it’s like, someone always asks me how my day went and what I did, sends me food, takes care of me, and I’m not used to being cared for like this. I really appreciate having him there.

What I like the most is that even though we’ve known each other for less than a year, we’re so open to each other (and it’s very legal for both sides 😆). I’m close with my family so their thoughts matter din, and both our parents support the relationship.

Even though it’s not always good days with us, I feel comfortable talking about bad days as well. If there’s something annoying him or me, we don’t really fight about it and instead just talk and reach a compromise.

Venice: I call it a “relationship” because I’m not actually allowed to have a boyfriend until after I graduate college, but both our parents know that we’re, like, at this “MU stage” where we’re really just waiting for me to graduate before we make things official.

Being in a relationship is so so sooo fun! Exploring the world with someone you love, and just knowing that you’re always gonna have someone to hang out with and vibe with is such a nice feeling. I love that we get to work things out together in the sense that we don’t treat things in a very “relationship-y” way, but more of in a “rational friend” way. It feels more like a friendship than a relationship, and it’s really just so nice to spend so much time getting to know someone you love so much and want to grow closer to.

Wonder: What’s something you would say to your past NBSB self?

Dana: To wait for someone who will choose to wait for you. When I was in high school, I tried to force a relationship with someone but both parents were against it 😵‍ When I was in my freshman year, I had a fling with a walang kwenta (no value) guy. With my boyfriend, I realized that there’s such a thing as timing. I’m glad I didn’t dive into dating during my college years because I solidified my identity and life experiences, parang nasagad ko na lahat (I maximized all of it) 😆 I felt like I’m complete, and it just so happened that a friend [introduced] me to my boyfriend. It wasn’t the most natural way but pwede na (it’s good enough).

The best part about choosing someone who waits is he won’t push or force you. Instead parang mas papa-fall ka nalang (you would end up falling for him). Actually, some of his friends said that six months is already long. Even in our generation, it’s unusual for people to wait before getting together. I’m glad that I got to know him first and really waited for a suitable time for everything.

I think having lots of experiences to discover myself helped me grow and mature, and it prepared me to eventually be ready for a relationship.

Venice: It’s not as magical as they hype it up to be, but it’s beautiful in ways you’ll learn to appreciate as your journey through your first relationship. The media portrays it to be so magical but it’s really not like that—it’s too idealized, I’d say. But it’s not like it doesn’t have its magical part too, they just manifest in a different way from how media portrays it. It’s more beautiful that way because it’s your own magic that you get to find out for yourself!

Adulting involves doing a lot of things for the first time, relationships included. Coming from a former NBSB myself, it feels different to listen to people talk about being in love this time around. At the end of the interview, I found myself saying, “Ang saya maging masaya para sa iba (There’s so much joy in being happy for others).”