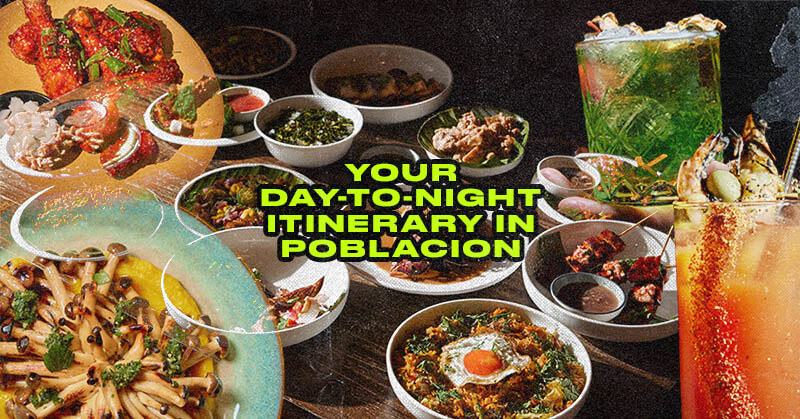 Your Day-to-Night Itinerary in Poblacion

West32, Alamat and other bars await you in Poblacion

Even for the resident recluse, staying at home can get old after a while. You start feeling icky after being cooped up for so long—you run out of ideas, you begin to feel stuck, and you find yourself in a cycle. Routine is great, but we need to step out and switch things up every now and then.

With a number of us still in a work (or study) from home setup, there really aren’t boundaries set between work and life. We know it’s tempting to stay in bed to cure cabin fever. Maybe even start a new show or something. Trust us, we’ve been there. We’ve done that. After weeks of moping around and trying to pick ourselves up, we’re simply surrounded by half-finished novels and series staring back at us, waiting for completion.

You’ve heard it from us: get your muscles moving. Take a day off. Go outside. It might seem inconvenient, but we promise, it’s worth it.

With that being said, we’re not one to give advice without an action plan. What better cure for cabin fever than having a night out with friends? What better place to have it than Poblacion?

Assuming that you slept in (as you deserve 👸🏻), you’re right on time for brunch! This Japanese-Peruvian themed restaurant recently opened itself to the daytime market after multiple requests, and you’ll see why once you taste their cuisine. Fill yourself up for the fun day ahead with their specials: La Japonesa signature roll, Lengua Katsu, Lomo Saltado, Tapas, Tiraditos and Ceviches. If you’re down for daytime drinking, check out their crowd favorites like the Watermelon Tub, the 7-spirit Hokage or the Sakura cocktail.

Japonesa is open from 11AM to 1AM on Sundays to Thursdays, and 11AM to 3AM on Fridays and Saturdays. It’s located at 5856 Jacobo St., Brgy Poblacion, Makati City. Reservations can be made by messaging their official Facebook page and Instagram page.

Take your time walking around the neighborhood—it’s a charming, quaint area. In the past, it’s become notorious for its reputation as a red light district, but now it houses hip bars and nightclubs where millennials and Gen Zs alike flock after hours.

If you find yourself next to a nondescript three-story building next to a Mini Stop, you’ve found yourself at the right place. Also owned by Notorious Concepts, West32 is a Korean-American restaurant inspired by its namesake, located in New York City’s Koreatown street.

For light bites, choose from their decadent appetizers including their Corn Chi-Jiu Skillet, Crab Caviar Gamja Jeon and Rosé Tteokbokki. If you’re looking for a heavier meal, West32 also offers their trendy take on classic Korean food such as their Chicken and Beef Bulgogi, The West 32 Samgyeopsal, Beef Belly Kimchi Fried Rice and the Stone Bowl Bibimbap. Pair these with their soju-based cocktails like That’s the One.

WEST 32 is open on Tuesdays to Saturdays from 5PM to 1AM. Reservations can be made by messaging their official Facebook page and Instagram page.

After you get your Korean cravings satisfied, it’s time to party! 🥳 The night is still young, and it’s time to head over to Notorious HQ. Located above West 32, the nightclub is the most sought out location by party goers in Poblacion, and it has evolved as the melting pot of Poblacion’s party crowd through its different entertainment initiatives and events. If you’re lucky, you might catch your favorite artists from Careless Music and After The Noon Records!

Notorious HQ is open on Wednesdays to Saturdays from 9PM to 2AM. Located at the second floor of 8464 Kalayaan Ave., Brgy Poblacion, Makati City. For updates, follow them on Instagram.

Sober Up at Alamat

If you’re looking for a more laidback change of scenery to sober up, Alamat’s the place to be. Get your dose of comfort from their craft beers and classic Filipino dishes, as well as the gastropub’s homey atmosphere. Treat yourself to some bites with their reimagined pulutan. Crowd favorites include the Honey Chili Chicken Skin, Pork Belly BBQ and Mushroom Chicharon.

If you’re still down for some drinks, treat yourself to Filipino-inspired cocktails such as their Tanglad, Pandan and Salabat G&Ts, or their best selling craft beers Ang Alamat, Take Me To Your Leader and Katipunan Golden Ale.

Alamat is open on Tuesdays to Sundays from 6PM to 2AM. Located at the second floor of 5666 Don Pedro, Brgy Poblacion, Makati City. Stay updated by following them on Instagram.

What are you waiting for? Poblacion awaits.