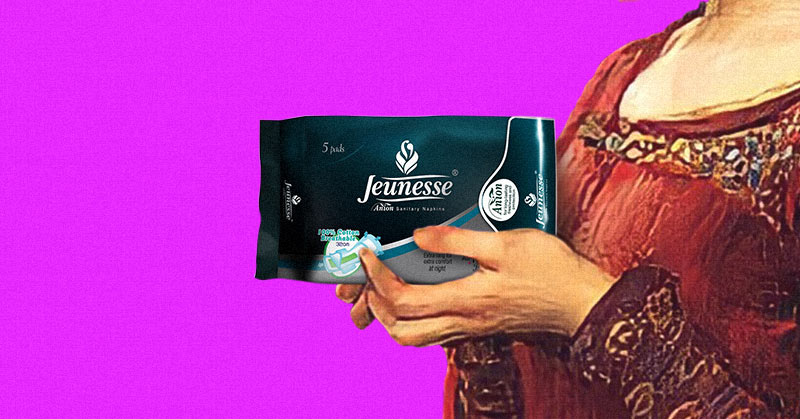 I Want To Talk About Napkins (AKA Sanitary Pads)

I still remember the first time my (almost) monthly visitor first came to pay me a visit. I was 12 years old, not at all panicked but still hesitantly knocking on my parents’ bedroom door. I told my mother, and she said something along the lines of “I knew it was coming,” in the way only mothers can say with certainty. She brought me to her bathroom, gave me the walkthrough, handed me my first set of napkins (AKA sanitary pads) and allowed me my privacy.

Now, at the ripe age of 29, I’ve been having my period for 17 years—if it were an actual person, it could register to vote. You’d think all that time bleeding would give me assurance that I knew what I was doing, but the truth is that I don’t. All these years later, I still struggle. There are the occasional smells, itches and spills. Sure, none of this is my fault—my body will do what it will do—but I’d still like to limit it, you know?

No one enjoys their period. And when napkins AKA sanitary pads are the only things at the frontlines, things can get…messy.

PS: For anyone that wants to bring up menstruation cups or tampons with me, I can’t hear you. I haven’t used them, and I have no plans to. We’re all fighting the same battle, but we can choose not to be armed with the same weapons.

RELATED: Where To Cop Bralettes On A Budget

Look, I am not an active person. I do not do yoga or box or bike or jump rope; I barely get my ass of my chair on weekdays and off the couch on weekends. And yet, somehow, tagos is still a very real thing in my life. It’s not even about the amount of blood sometimes, which makes it all the more confusing. Sometimes the flow just seems to have a mind of its own.

Yes, that’s right, I’m bringing up period smells, for the simple fact that periods do smell. Sometimes it smells like iron, other times it smells like a mixture of several different things I cannot even distinguish. But you know what I do know? It never not smells.

For those that haven’t experienced it, wearing a pad—especially the night pads—feels a lot like walking around with a shirt between your crotch and underwear. Sitting is suddenly uncomfortable, as is walking and laying down.

IYKYK. If you don’t, then I’m officially jealous of you.

A lot of napkin brands market their quick and ultra-absorbent pads, which is great! It eliminates the risks of spills! But what you sacrifice in the sake of absorption are rashes in an area you don’t really want to have rashes. Itchiness is irritating, but even more so when you can’t scratch it without getting glares (yes, even from family members).

This is incredibly trivial, but I personally do not like having to store my napkins. They all come wrapped in plastic that you have to tear through to get the goodies—and while it’s efficient, it’s definitely not the most hygienic or the most organized to look at.

RELATED: We Asked 17 People to Show Us Their Best Shopee Purchases

Do I have the solution to all my frustrations? Of course not

—but I might have found something that comes close.

Jeunesse Anion claims to not be the typical sanitary pad, due to the addition of a special anion strip that’s both anti-fungal and anti-bacterial. This helps eliminate the unwanted smells but also reduces period pains (!!!). Each napkin is ultrathin but still incredibly absorbent, making that uncomfortable feeling almost a thing of the past. And the packaging is resealable (and cute, honestly)!

I’ve been trying out Jeunesse Anion for about a week now, and I have no complaints. Their longer panty liners put me at ease about the daily discharges, the smells have disappeared and I barely even remember I’ve stuck something on my underwear. Definitely worth a shot, ladies.