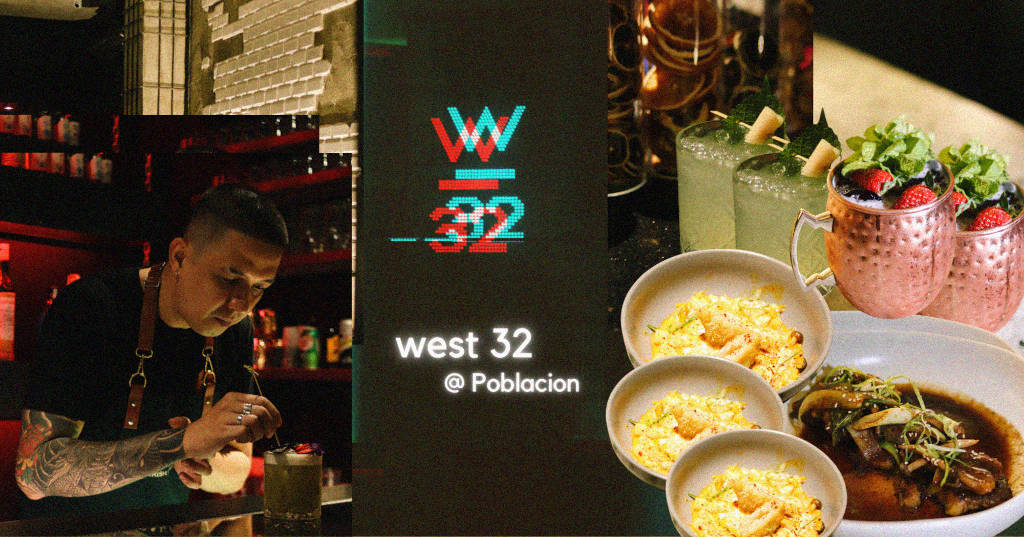 Come to WEST 32, a safe space “where everyone is welcome”

It’s no secret that the Food and Beverage sector is one of the worst hit industries during the pandemic. Many sacred places, which fostered one generation after another, had to close down because of brutal lockdowns. Still, many businesses, which emerged in the past two years, thrived, including Brooklyn Industry Group’s Notorious Concepts, the lifestyle group behind restaurants like Almusal Cafe in Katipunan and WEST 32 in Poblacion.

RELATED: Nightlife Spotting: A Guide To Having The Best Time In Poblacion

If you find a three-floor structure without signage along Poblacion, you’re in the right spot. The area, occupied before by NoKal, is where you’ll find yourself late at night as you navigate through another pub crawl. It’s conveniently located beside a Ministop, too.

WEST 32 is the brainchild of James Thomas and Jeff Oh, two Korean American best friends from New York who have made the Philippines their home for the past few years. “West 32” is a reference to the heart of Koreatown in Midtown Manhattan.

In an exclusive interview with Wonder, we get to know more about the inspiration behind the restaurant straight from co-founder James Thomas. He remembers a time way before the Korean Wave, AKA Hallyu, and K-pop became a burgeoning global phenomenon. He narrates, “In Midtown Manhattan, Koreans have this one block, [which is] ours…[Koreatown] actually started in the 1970s when a lot of Korean immigrants were coming over. These were the old school guys making traditional Korean-type barbecue restaurants, bars and spas. In the early 2000s, those guys were aging out and they were passing [down] their aprons to their kids…It became more and more trendy; it was catching up to the New Age.”

The founders of WEST 32 take New York’s Koreatown to Poblacion with their influences highly evident, from the aesthetics of the place to the one-of-a-kind menu. James notes, “Riding the subway is a way of life in New York [whether you’re] poor, middle-class or rich; it’s the fastest way to get around. That’s why on the walls, we have the broken subway tiles, which really remind us of home.”

The dining tables are also made of concrete and broken green glass aggregate, with the tiles representing soju, a drink that’s staple in Korean culture. “Another fun fact, Koreans drink more per capita than any other race in the world. We beat out Russians by a little bit,” he quips.

Let’s just say the food isn’t exactly “Korean American.” The cuisine, in terms of the fusion, is traditional Korean, with Western and European cooking influences and methods. As James puts it, “it’s Korean done our way.” At the helm is Filipino Executive Chef Mikko Reyes who acquainted himself with Korean culture in the pandemic, many thanks to Korean dramas.

The menu boasts of classic Korean dishes that Pinoys are well-acquainted with, from crispy Korean Fried Chicken to sweet and spicy Stone Bowl Bibimbap and crowd favorite The West 32 Samgyeopsal. The top pick for the Wonder team? The divine Full Rib Galbi-jjim, slow braised beef short rib in a sweet and savory broth with carrot, radish, Korean chili oil and crispy perilla leaves. What a revelation!

When asked for James’ recommendation from the menu, he says, “That’s like picking your favorite child!” But his go-to, for sure, is WEST 32’s Beef Bulgogi. He notes, “It’s not your traditional bulgogi. A lot of times, bulgogi is looked at as a cheaper option. When you go to a Korean barbecue, you get the more expensive, thicker cuts…For us, we felt that it should be a little bit elevated. We use 24-hour sous vide beef, and it’s really, really tender and flavorful.”

Poblacion isn’t Poblacion without a pub crawl with the barkada or your SO (or person of interest for the night). Add WEST 32 to your list of must-visit spots with their incredible cocktails, a lot of which are familiar classics that come reimagined. James recommends That’s The One, a sparkling, refreshing and fruity soju-based cocktail with grapefruit soda. He notes, “For those who are more spirit-forward, we have something called Korean Negroni, which is very popular here. Instead of using gin as our base, we use mangosteen-infused soju.”

For the founders of WEST 32, the restaurant is a safe space “where everyone is welcome.” Growing up in New York as Korean Americans in the ‘90s, they were othered. James reveals, “Coming to the Philippines, [Jeff and I] are actual foreigners, so a large part of why we wanted to do [WEST 32 was] not just for us, but…for anyone that feels out of place, or anyone that needs to get away. Maybe they’re uncomfortable with their day-to-day grind or they have a fight with their boyfriend or girlfriend, and they need a safe place to just come and hang out and get some good food or drinks—whether they come alone or with a friend.”

Poblacion’s nightlife is finally making a comeback! Create new memories at WEST 32. Come for the good food and drinks, stay for the company.

Guests are encouraged to make a reservation before coming to the restaurant. Reservations can be made by messaging WEST 32’s Facebook and Instagram.