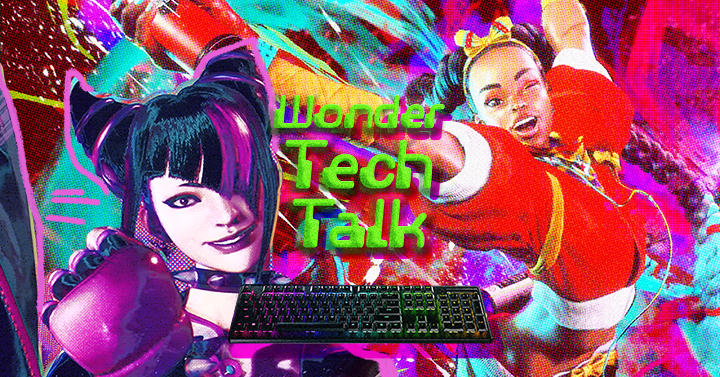 Wonder Tech Talk: All the Supercharged Updates and Upgrades for August

This August, Wonder continues to zero in on the concept of balance, whether it’s finding the perfect equilibrium between work and play, public and private personas, or the self and others. That’s why for this month’s Wonder Tech Talk, we’re focusing on our emotional support game updates, new titles to anticipate, tech accessory upgrades and the must-have devices to stay prepared for anything life throws at you.

In the newest trailer for Street Fighter 6, the world gets a glimpse of two characters: the newest ninja on the roster, Kimberly, and the return of Han Juri. The video shows off spunky newcomer Kimberly, armed with spray paint cans and a portable cassette tape. Her energy is always high as she takes on the fiercest opponents, ending each win unsatisfied when they tap out. Meanwhile, sadistic, thrill-seeker Han Juri bulldozes right back into the game series with her motorcycle. As usual, the fighter leaves no room for mercy in each fight.

Street Fighter 6 will come out on Xbox, Steam, PS4 and PS5 next year.

At EVO 2022, video game giant Bandai Namco shares the future of Tekken 7. The Global Finals of Tekken World Tour will end in up Amsterdam from February 4 to 5, 2023. Plus, players can look forward to a free update that includes battle balance adjustments. But wait there’s more. At the end of the trailer, they show the scene of Kazuya Mishima throwing Heihachi Mishima, his father, off a cliff. Then, Kazuya’s 1994 PlayStation render gets replaced with a modern version and a gleaming eye. Finally, a voice-over proclaims, “Get ready,” before the screen fades to black. While Bandai Namco is yet to elaborate on the cryptic ending, some fans can’t help but wonder if an original Tekken reboot is on the way, or if it points to the possibility of Tekken 8.

With over three million sign-ups already, the popular open-world RPG Tower of Fantasy will finally be open for pre-load on August 9th PDT (August 10th PHT). The game will launch globally on August 10th PDT (August 11th PHT) for PC and mobile devices. Set hundreds of years after the collapse of Earth, the universe of the Tower of Fantasy exists on the alien planet, Aida. Aside from its compelling narrative, lucky players who participated in the beta tests enjoyed its in-depth character customization tool, thrilling weapon-based battles, shared open-world explorations with friends and compelling narrative.

EcoFlow’s DELTA Series lets you stay charged wherever you go

Stay on the go 24/7, or prepare for any calamity with EcoFlow’s DELTA Series power banks. The portable power stations offer fast-charging, high-powered features while keeping relatively lightweight. EcoFlow’s DELTA line devices use lithium-ion batteries with innovative technologies, such as X-Stream. The technology lets the device fast-charge from zero to 100 in an hour. In addition, with 13 output ports, the EcoFlow Delta Pro, Delta Max and Delta Mini will let users plug in multiple devices and appliances simultaneously. If anything, EcoFlow devices are best to keep close in case of emergencies.

Shop EcoFlow devices for less until August 12 on Lazada.

Stay in the loop on all tech headlines only on Wonder.