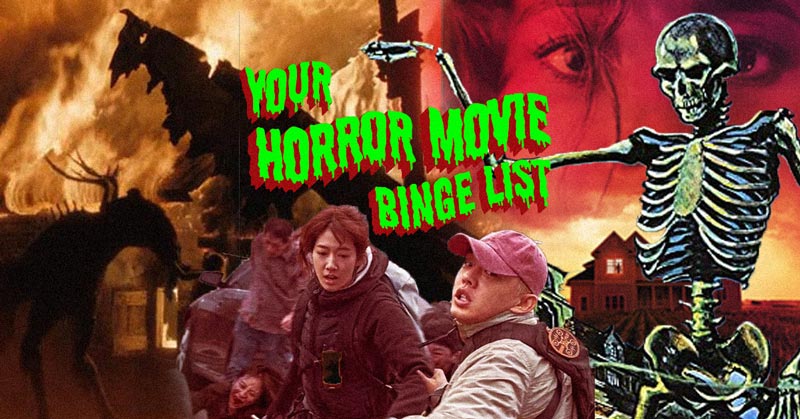 2021 Is Scary, But These Horror Movies Come Close

If you’ve been living in 2021, then these horror movies should be no problem…we think

Do you remember those moments when you would wonder: “What would I do if I was in [insert horror movie here]?” We used to ponder if we could outrun the bad guy, if we could stand being in a room during an exorcism, if we could be convinced that a doll was out murdering people. Well, we might never know the answers to these questions, but we sure do know what it’s like living in an isolated state to try and keep away from a monster ravaging the world.

2021 is a horror in itself, but there are a few horror movies that still scratch our itch.

There’s Someone Inside Your House (2021)

In the hope of settling down, Makani Young moves from Hawaii to Nebraska, where her grandmother lives. And all seems okay and normal but, as graduation nears, a killer starts making victims of her classmates. And while he’s at it, he exposes their darkest secrets while wearing life-like masks of their faces.

Catch There’s Someone Inside Your House on Netflix.

Ed and Lorraine Warren are at it again in The Conjuring: The Devil Made Me Do It. In this chapter, a cop comes across a dazed and bloodied young man walking down the road. He’s accused of murder, and his defense is that he was possessed by a demon. Naturally, the Warrens are called into the picture, and they are left to put enough evidence together to support the claim—and in doing so come across a demon they never have before.

Catch The Conjuring: The Devil Made Me Do It on Netflix.

Say hello to Madison, a young woman paralyzed by her shocking visions of murdering strangers. When she tries to figure things out on her own, she must face the most frightening reality there is: that her visions are actually her reality.

There’s a new serial killer in a small down, whose next victim is a blonde high school girl (don’t worry, she’s not ditsy). As he tries to use an ancient dagger to kill her, the two switch bodies. Imagine: a killer in the body of his victim, going to school with even more potential victims.

PS. This is actually a horror-comedy, so it’s a fun watch. But also frustrating because it horrifically (read: comically) portrays sexual assaults.

In #Alive, a virus has taken over a Korean city and one man locks himself inside his apartment to try to keep himself safe (sound familiar?). But just when you think you’ve seen enough apocalyptic films, this one will remind you that there are still some new and exciting ideas out there.

When her husband dies, Beth is left alone in the lakeside home he built for them. And while she mourns, she dreams of a presence in the house that keeps calling out to her—but everything is washed away when the morning comes. Unable to put her mind at ease, Beth digs through her husband’s belongings to try and find an answer.

She’s lost her family and, as a result, Dani’s relationship with Christian becomes strained. In an effort to heal in more ways than one, they make a trip to friend’s ancestral commune. But when they see an old couple strangely—eerily—commit suicide, things start to unravel. Who would have thought watching someone kill themselves would be the highlight of a vacation?

After coming together following the tragic death of their friend, four college buddies go on a hike to reconnect. But when they take a wrong turn, they’re led into a mysterious forest from Norse legend, where an ancient evil exists—and follows them.

Catch The Ritual on Netflix.

New(ish) titles are well and good, but if you want to revert back to the classics for Halloween 2021, you could always give The Babadook, El Orfanato, the Final Destination series and Jeepers Creepers another go—because, sometimes, watching horror movies is just more satisfying than living in one.