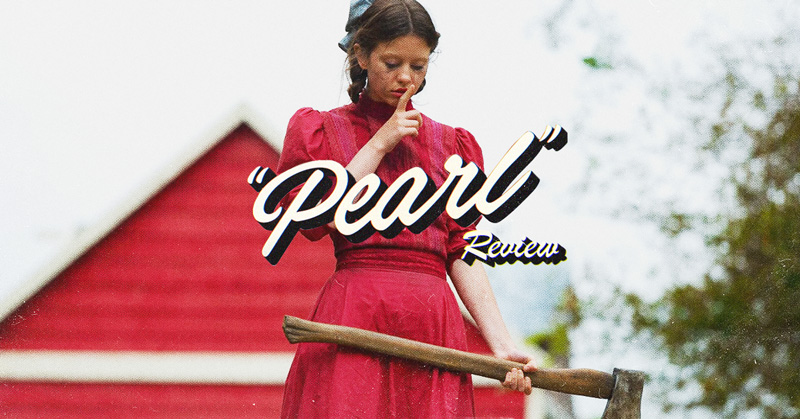 All the buzz about A24’s newest film, Pearl, written by Ti West and Mia Goth, is keeping us on our toes. The prequel to the film X, released earlier this year, Pearl expands the franchise’s story. It all starts with a family in the midwest, and as it turns out, there is more than meets the eye in their humble farm home in 1918.

Pearl (Mia Goth) is a farmer girl with big dreams: she wants to sing and dance on the big screen. The young lady practices during her free time, even donning her mother’s dress to look the part. However, reality is not as kind to Pearl as her dreams are. Her life is filled with suffering and frustration outside of her dreams. With her husband at the war front, she is left alone with her parents: a father who has caught the flu (Matthew Sunderland) and a devout and strict mother (Tandi Wright).

Still, our main protagonist finds a way to live her dreams, even in the most mundane ways. We see Pearl doing chores with a carefree smile as if she were a Disney princess. She goes through the day with a choir in the background, emphasizing her merry nature. But the typical Disney introduction quickly ends when Pearl kills a goose wandering in the barn and feeds it to an alligator. From there, it’s best to leave you wondering what Pearl’s next prey will be.

RELATED: Which Horror Movie Villain Are You?

The comeback of vintage cinema in modern horror

As most of the movie industry heads for remakes and live-action adaptations, A24 showcases that the film aspects of the Golden Age of Cinema can convey a striking story. The film does a brilliant job of setting up the narrative with a character like Pearl, who resembles Dorothy Gale from The Wizard of Oz. Both characters are whimsical and dream of something more than living the life of a farm girl. Yet, Pearl defies expectations when she commits heinous crimes.

The movie production wonderfully sets the stage for the story to come alive beyond the tropes it uses. With the eccentric color palettes straight out of a children’s book to the lively music, Pearl pays tribute to the Golden Age of Cinema in bold and grotesque ways. While the characters do not go anywhere beyond Texas, it makes the audience feel similarly trapped to see the events of Pearl unfold.

RELATED: 5 Killer Doll Movies to Watch if You Love Horror

The search for love

Despite no travel to a destination like Emerald City, Pearl takes us on a journey where evil magic does not corrupt the main protagonist, and instead shows how the cruelty of one human can start from the desire for love and satisfaction.

Spoiler alert: Pearl upgrades her killings from animals to human prey. However, the movie doesn’t explain her motivations. Instead, hints are laid out in the open as the story peels back more of the character’s layers with every fresh kill. Her desires are simple: to receive love from her parents, pursue her dream and leave the farm life behind to live on her own.

Since the story takes place during the First World War, the characters’ behavior adds more depth to the narrative. For example, Pearl’s mother’s iron fist over the money they earn. In a time of suffering, people can only dream so much about what they can do in life. If chances appear, Pearl shows she is willing to take them. But at what cost?

A delightful mix between horror and the coming-of-age genre

Pearl fits just right into the lineup of the female slasher cinematic universe, specifically in coming-of-age titles like Carrie and Jennifer’s Body. All of these three films deal with the theme of how women navigate their conflicts with society as they grow up as adolescents.

For Carrie, it shows teenagers’ universal fear of high school and some aspects of womanhood that many women have a complicated relationship with. In Jennifer’s Body, the movie shows how the act of embracing a façade of happiness and popularity can be rooted in trauma. Particularly, the pain that stems from men and the patriarchal structure of society. And with Pearl, the film reimagines the genre by embracing our idea of an ambitious woman. A24 takes that to the next level by adding a layer of Pearl’s inability to express her emotions due to specific circumstances.

The most exciting thing about these movies is how we see a coming-of-age ceremony gone wrong. Or—depending on what you think—go terribly right. The thing is, all of these young women have committed atrocious crimes, not necessarily out of impulsiveness, but for rather complicated reasons. Nevertheless, it is gratifying to see girls have a voice in what they can do, especially in a world that mostly silences them. Whether for a prom queen title or a career as a famous singer, those who kill to get what they want should be a classic horror movie trope.

Though there is a lack of suspense or jump scares, the tension of what Pearl does next is something the film does flawlessly. No clues point out who the prey is, but we see the killer living a normal life while we wait for blood.

There’s no telling if the X franchise will have more films. However, we are sure that Pearl will be a cult classic in the horror genre. After all, we wouldn’t want to crush poor Pearl’s heart now, would we?