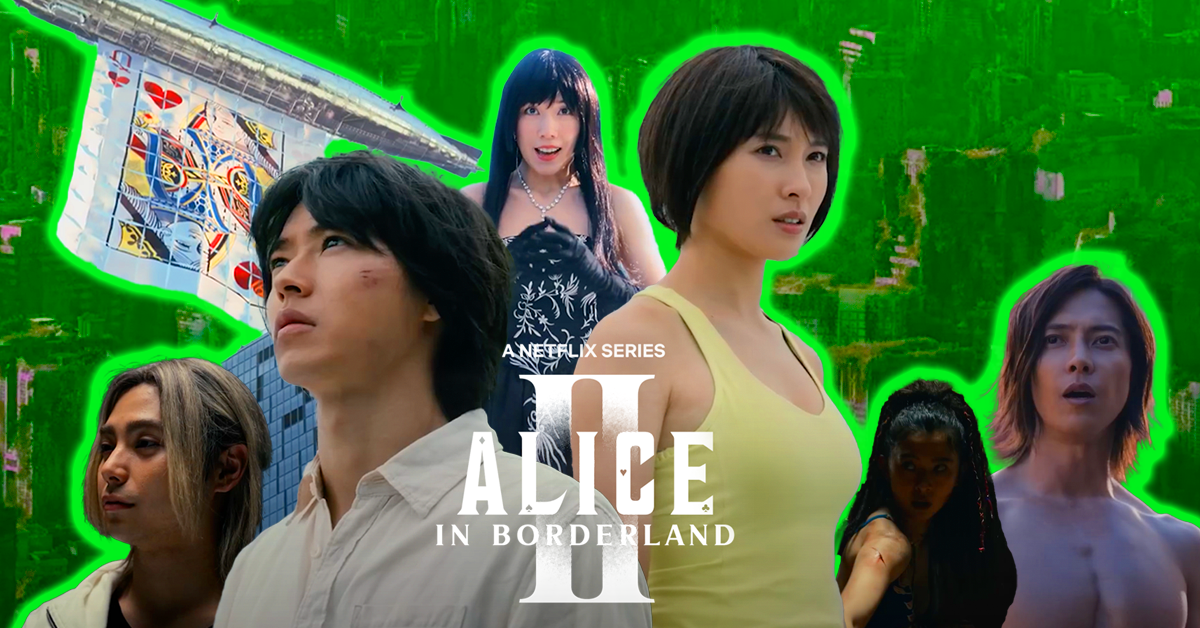 What comes after the reunion at Shibuya Crossing? Well…

There’s no denying that Netflix’s best Christmas gift for the whole world was the release of Alice in Borderland 2. After two long years of dying to know what happens after season one, we finally got our answers and a satisfying ending. We’re not going to lie, this second season is much more gruesome, gory and violent. But the relationships are still wholesome and a breath of fresh air, despite someone getting gunned or lasered down for whatever reason.

To catch you up to speed, Alice in Borderland follows unemployed gamer Ryohei Arisu (Kento Yamazaki), who somehow gets mysteriously transported to a parallel Tokyo universe. But as the storm settles, he finds himself needing to play mysterious games held in “arenas” with extremely high stakes (read: survival). The first season follows Arisu and his newfound friends as they collect cards to complete the deck. This batch of episodes ends with a cliffhanger, with the players in the middle of the desolate Shibuya Crossing and the end nowhere near their sights. Season two promises a focus on games whose difficulties reach the face cards. Plus, the faces behind them.

So with Alice in Borderland 2 ready for your binge-watching session, we give you reasons to finally catch up if you haven’t yet.

Oh, and fair warning, some minor spoilers ahead.

New season, new names and a lot of new rules. You guessed it—we get another load of mind games that have us scratching our heads out of confusion. What is Osmosis? Or why is a game called Solitary Confinement? If you’re a puzzle solver like Arisu, then season two will definitely exercise your mind—only if you can take your mind off the people battling it out for their literal survival. Whether it’s the lawless escape from the King of Spades or a long game of tag with the King of Clubs, the new rounds might be games we’re familiar with. But in true Alice in Borderland 2 fashion, we can expect more mind-boggling rules and questions as Arisu, Usagi and company move forward.

A new bunch of characters—six, to be exact—joins the group of familiar faces. We have Kyuma (Tomohisa Yamashita), the King of Clubs, who has a disdain for clothes but ultimately leaves a mark on Arisu. There’s Heiya (Yuri Tsunematsu), a high school student skilled in archery, who becomes a new ally to the team. Along the way, the players encounter Banda (Hayato Isomura), Matsushita (Kai Inowaki), Yaba (Katsuya Maiguma) and Kotoko (Honami Sato). Packed with their own backstories and origins, their motivations to win (or lose) and get out of Borderland will make up for another interesting season.

Arisu learns that there’s more to life thanks to Kyuma. One of the games causes a break in Chishiya’s façade. Heiya, despite only coming on board in the second half, transforms into a selfless and resilient player. But of course, what’s a season two without seeing more recurring characters for Alice in Borderland? Aguni returns as an ally everyone would want on their team, even going as far as doing his most for Arisu and Usagi to make it to the end. As more people find themselves in even more compromising situations, we’ll see that there’s more than meets the eye with them.

RELATED: Is Chainsaw Man Worth The Hype?

With no more cliffhangers (at least), Alice in Borderland 2 answers our endless questions. We learn about Borderland and the reason why so many people ended up playing games for their survival. Everyone knows that Borderland is the in-between of life and death—so why are Arisu and the rest of the gang literally fighting for their lives? Who will go on until the end of the game? The final episode has it all. Here’s a warning, though: Alice in Borderland doesn’t go easy on us when it comes to the heart-wrenching flourishes, but all will make sense once the credits roll. Unless the appearance of the Joker Card makes you think otherwise—we’ll never know 👀

Bonus: the women of Alice in Borderland 2

We’re not going to lie, whether it’s Usagi (Tao Tsuchiya), Kuina (Aya Asahina) or Ann (Ayaka Miyoshi), we all know that the women of Alice in Borderland carry a lot of weight in the show. Usagi showcases emotional (and physical) strength, which also pushes Arisu to soldier on until the end. Of course, Kuina, whose fighting skills and self-assured personality immediately made her a fan-favorite. Despite Ann’s cool and collected demeanor, she also appreciates the company she’s made while in Borderland. New additions like Heiya (Yuri Tsunematsu) make the roster of women a lot more interesting. So if you need more incentive to watch, TBH, do it for them.

What are you waiting for? Sit back, relax and hit “play” on Alice in Borderland 2 on Netflix.