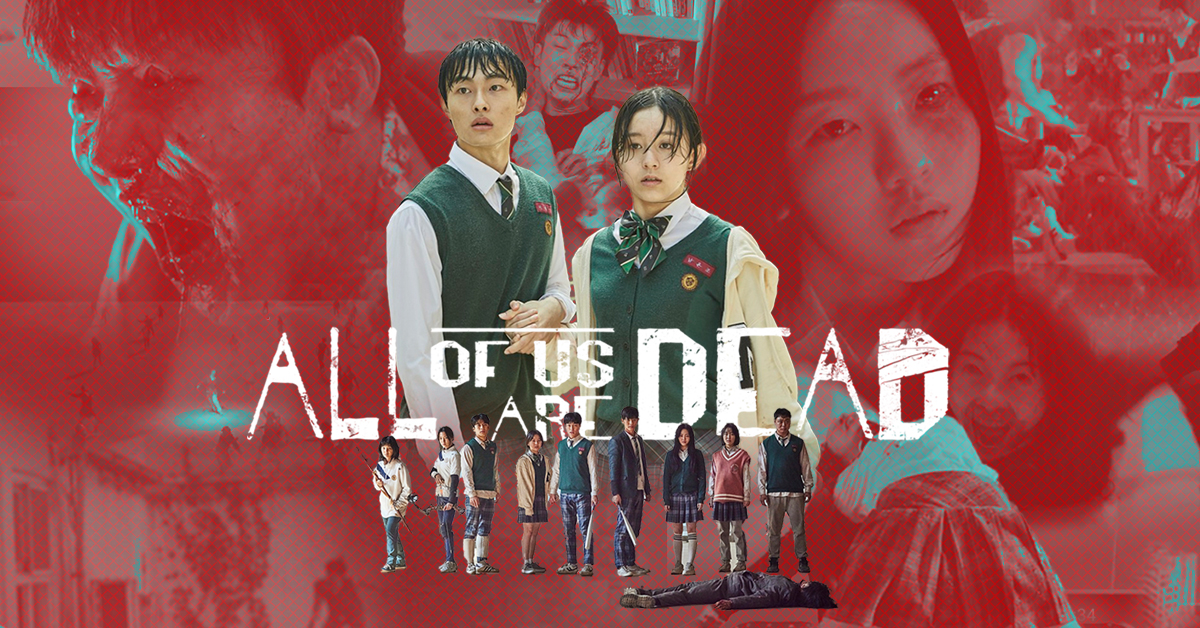 First Impressions: Netflix’s All Of Us Are Dead

All Of Us Are Dead Netflix: Good overall, but I have some questions

Today, Netflix premieres another original series, All Of Us Are Dead, proving that—once again—the zombie craze is still worth an exploration.

In this Netflix series, students are trapped in their high school, which becomes ground zero to a zombie virus outbreak. With what seems like thousands of individuals trapped inside one compound, is it even possible to get out (fully) alive?

RELATED: “#Alive” Review: A Contender for Lockdown Movie of our Nightmares

Now, anyone can rightfully say that there is a surplus of zombie content out there to consume. There are several series and even more movies circling around this, each one a story of survival and ingenuity. But to them, we say: So what? As I heard just this afternoon, “We love the undead.”

So here are my first impressions of the first episode of All Of Us Are Dead on Netflix.

The series opens with a high school boy on a rooftop as he faces his bullies. Strangely apt, there’s an incorrectly-colored Nazi flag waving in the wind as these bullies question, berate and physically assault their classmate.

And that’s when things go to hell. The bullies think their man is beat, but he isn’t. He bleeds, contorts and attacks. Afterwards, while there’s still a little human left in him and he’s facing his father while on a hospital bed, he says: Things will not get better. This is the only way. Someone has to die.

All Of Us Are Dead Netflix: Why are these people not listening to the scientist?

AGAIN and ALWAYS, this is a frustration. In All Of Us Are Dead, as the science teacher tries to explain why a student was kept in his lab after she got bitten by a—let’s just say it—zombie hamster, everyone just shushes him. “It will look bad for the school,” “why were the police called,” “this should have been handled internally.”

Excuse me, but listen to your scientist. If he says someone needs to be kept in quarantine, keep her in quarantine.

PS. Yes, this does include the rest of us still living in the pandemic.

All Of Us Are Dead Netflix: That skin-revealing and honestly disgusting storyline is completely unnecessary

We’re back at it with the bullies, only this time they’ve put all their attention on a girl. A girl, by the way, who stood by them on that rooftop. But things aren’t so friendly now, as the boys strip her and video tape her, topping things off with a threat that they’ll send the video to her mother if she tells anyone.

And even when someone stops the situation from going any further, she chooses to stay with these assholes, arguing that if she runs way now, it will only be worse tomorrow. And they make her strip again.

Not exactly a storyline you think is important to a zombie series, huh? Yeah, I didn’t think so either.

Granted, I have never faced a human running at me while he bleeds from the mouth, but isn’t it human nature to run away from something like that? I would like to think that my body would take me as far as it possibly could (which, if I’m being honest, probably isn’t far), and it would at least try instead of being stuck in place…right?

All Of Us Are Dead is familiar, yet offers something new

Like I said earlier, there might already be too many zombie-centric films and series out there. All Of Us Are Dead is definitely not an exception. It has all the makings of a zombie flick, after all: someone getting bitten, someone infecting everyone else, a lot of blood and lots of running. Netflix even threw in a love triangle in the first episode. But at the same time, All Of Us Are Dead does still change things.

First of all, we’re dealing with students here. Students with different priorities and overpowering hormones, and without a real leader to tell them what to do or how to act or where to go. Students without real weapons and only have notebooks, rulers and a hoodie to arm themselves with. Secondly, it’s set in a school—a secluded area, a true ground zero that can be kept under wraps, if that’s how they want to treat it. So it’s not just a story of survival; it has the true potential to be a story about humanity.

I’ll sum myself up: All Of Us Are Dead might just be another zombie flick, but it sure does have potential.

“All Of Us Are Dead” premieres on Netflix on January 28.