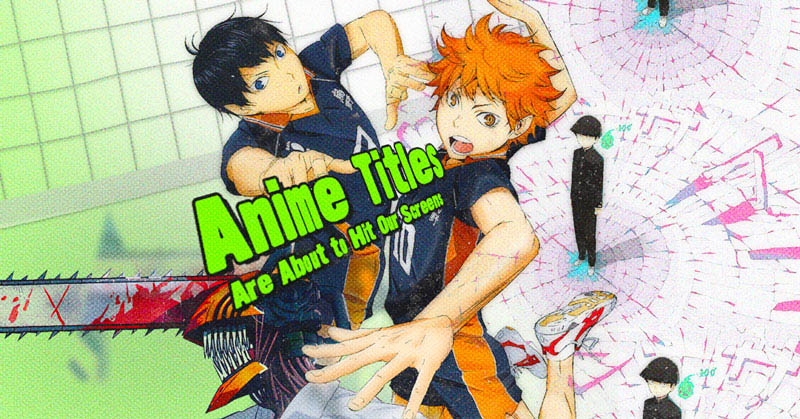 Nice Kill!: Hold On to Your Seats, These Anime Titles Are About to Hit Our Screens

Whether you’re a long-time anime fan or a newly-converted viewer (thanks to the pandemic), we all know that each year always has a ton of titles worth all the wait. At least for the latter half of 2022 and 2023, manga hall-of-famers will make their silver screen debuts, and fan-favorite animes will finally return. Consider this a teeny, tiny trade-off for what happened in the latest My Hero Academia chapters—we’ve got a lot of other anime comebacks and manga to keep ourselves preoccupied with! 🤷

Up ahead, we roundup updates about the hottest anime comebacks.

One of the year’s most anticipated shounen manga adaptations is Tatsuki Fujimoto’s Chainsaw Man, animated by MAPPA Studio (Attack on Titan: The Final Season). The award-winning manga will officially hit Japanese broadcasting channels this October.

Chainsaw Man follows Denji, a human struggling with a massive debt after his father’s passing. Thanks to the devil dog he saved named Pochita, he gets by and survives by doing odd jobs for the yakuza—killing devils included. But during a tight fight, Pochita sacrifices himself for Denji, turning him into a hybrid devil-human creature with a chainsaw for his head. Catch the rest of his (mis)adventures by reading or watching Chainsaw Man.

RELATED: ​Otakus Rejoice: Crunchyroll is Now Available In The Philippines!

Two years since the end of season four and the last chapter of its manga, Haikyu!!’s anime will also end with Production I.G. coming back as its animation studio. If we backtrack all existing arcs, the animation is only halfway through Hinata’s entire volleyball journey. But instead of a fifth season, they’ve decided to cap it off with a two-part film. (Honestly? It’s giving The Twilight Saga: Breaking Dawn.) However, long-time fans are 50-50 on the announcement, given the fact that two of Karasuno’s most pivotal matches—versus Nekoma and Kamomedai—have a lot of beef and meat to them. Add to that the timeskip chronicling Hinata’s time in Brazil. We’ll just have to wait and see how they pull this off.

The kickoff event for Haikyu!! Final starts in August 2023. But we’re not deeming this as bad news yet, because Hakiyu!! Week also starts this August 19th. So who knows, we might get more surprises from Furudate-sensei and his team.

Reki, Langa and the rest of the gang will make their great return to our screens with a second season and an OVA (original video animation) of SK8 The Infinity. The original skating anime by Studio Bones first premiered in January 2021 and received lots of love throughout its run. While we’re yet to get word on what orc the new content will follow, let’s recap the original synopsis: Long-time skateboarder Reki is a regular at the hardcore midnight skating competition called S. One evening, he brings new student Langa, a skilled snowboarder, to S and effectively introduces him to the world of competitive (and sometimes aggressive) skateboarding. Short of saying, their lives get turned upside down.

All the good titles keep on coming because Mob Psycho 100 will also make its comeback on October 5th this year, three years since its last season. The anime might catch up with the manga’s final arcs, making fans curious about how Studio Bones will squeeze the remaining arcs in the final season.

For newcomers, Mob Psycho 100’s plot goes like this: Shigeo “Mob” Kageyama has always kept a low profile—mostly because he has strong psychic power. He tries hard to remain unemotional to keep control over his powers and seeks the help of spirit medium Reigen Arataka to manage his abilities. But with different troubles and dilemmas plaguing him, suppressed emotions continue to grow within Mob and threaten to break his limits.

It really does seem like 2023 will witness the grand return of many amazing anime, Jujutsu Kaisen included. While no date has been officially announced, the anticipation of waiting for next year is enough incentive for many. After a successful first season and a hit prequel movie, we’ll now see what happens to Yuuji, Megumi and Nobara when they get summoned to Shibuya by Gojo-sensei. The second season will likely cover Gojo’s backstory and might set the stage for the messy, messy Shibuya arc, but we’re all still in the dark.

Can’t get enough of Loid, Yor and Anya? Same here. At least Spy X Family part two will make its way to Netflix this October. Now that they know how to play the part of the perfect family, Operation Strix is still a go. But with a threat of a terrorist attack looming, the Forger Family needs to put a stop to it and keep Anya safe and sound. Season one had more comedy scenes than action, but based on the trailer, fans remain optimistic that we’ll see Loid and Yor in dangerous battles.

Catch up with SPY X FAMILY before it drops this October, only on Netflix.

RELATED: 5 Hot Anime and Manga You Shouldn’t Miss on Crunchyroll

Did we miss any manga finally getting an anime adaptation, or how about a long-awaited next season? Sound off on your favorite anime comebacks in the comments!