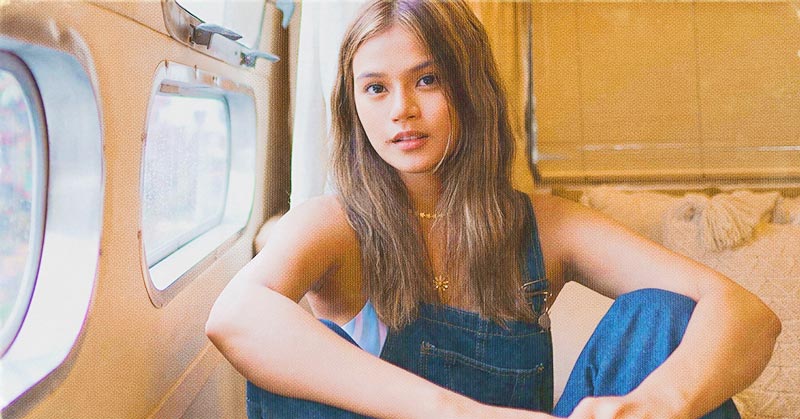 “I was really fascinated by the idea because we Bisaya people always use the word ‘puhon’ in any way, squeezing it in our sentences.”

Maris Racal seems to be the unexpected—but wholly welcome—star of the pandemic. Naturally, the actress continues to appear on our radars, from her fashionable TikToks, her crying-while-typing meme or her kilig-worthy duets with Rico Blanco. But aside from her short videos and acting projects, the 24-year old singer, songwriter and actress released two singles this year: Ate Sandali and Asa Naman. Both have strikingly different messages and vibes, but we ultimately still feel a semblance of validation and hope through her lyrics.

Let me zero in on Asa Naman, an upbeat, indie-folk track that talks about the sting of disappointment and the pure optimism that comes with being in love. The song is playful and honest, the perfect balance of emotions when we reach that part of a relationship. However, there’s a deeper meaning behind her singing the verses in Filipino and the chorus in Bisaya: the single doubles as an homage to her Bisaya heritage.

Ahead, Maris talks about the story behind Asa Naman, switching up her sound for this single, and her experience working with Rico Blanco in this exclusive one-on-one. Maris has more layers that ought to peel back, and a few of them we get to see in this interview.

Wonder: Can you tell us the story behind Asa Naman?

Maris: Asa Naman started with the idea of me releasing a Bisaya song because I’ve always wanted to do that. Siguro that idea, nasa backseat lang siya (I guess that idea has been in the backseat) because I had a lot of priorities then. But fast-forward years later, Rico [Blanco] told me to do a song in Bisaya. Matagal ko na siyang naiisip (I’ve been thinking about it for a long time). I just didn’t have the confidence kasi feeling ko hindi kaya (I just didn’t have the confidence because I felt like I couldn’t do it). So when he told me that, I immediately thought of the line “Asa naman ka karun / Kadugay ba sa puhon” which means “Nasaan ka na ngayon, bakit ang tagal na ng pangako mo?” (“Where are you now, why is your promise taking too long?”)

I was really fascinated by the idea because we Bisaya people always use the word “puhon” in any way, squeezing it in our sentences. [Puhon] kind of means “in God’s time.” So nag-revolve na lang yung meaning ng song sa “Asa naman ka karun?” (So the meaning of the song revolved around “Where are you now?”) Writing that song was so fun because I think ‘yan yung unang song nasulat namin ni Rico from beginning to end (that’s the first song I wrote with Rico from beginning to end).

W: Asa Naman, in terms of visuals and sound, is more laid back than Ate Sandali. What made you pursue a different direction for it?

M: When I was younger, I used to fly to Cebu yearly for the Sinulog festival. Lagi kasi kami nasa streets kapag Sinulog and then kapag nasa streets ako, ang dami kong naririnig na Bisaya songs from random sources; sa jeep na dumaan, sa isang restaurant, sa isang tricycle. Tapos ganyan na ganyan yung tunog niya. (We were always in the streets during Sinulog and, when we were there, I heard a lot of Bisaya songs from random sources such as a passing jeep, a restaurant, a tricycle. The sound is exactly like that.) I can see that it is very Filipino—alam mo yung ma-banda na song? Ang lakas ng drums, ng guitar so hindi siya sobrang futuristic. Parang yun yung OPM dati. (I can see that it’s very Filipino—you know how it sounds like when a band performs? The drums and guitar are loud so it’s not very furturistic. That’s how OPM was before.) Asa Naman could be a danceable song, but it wouldn’t feel like it’s home because I grew up listening to Bisaya songs. And also I didn’t want my whole album to sound repetitive song after song, I want it varied.

W: So we can expect different genres in your upcoming music?

RELATED: How To Get It Together This Virgo SZN, As Told By Our Favorite Virgos

W: You often collaborate with Rico Blanco, specifically for Ate Sandali and Asa Naman. How is the overall experience working with him?

M: Well, it’s been really great. Wala masyadong (Not much) problems, because so far we’re always on the same page, the same direction and we almost have the same tastes. I really appreciate Rico’s generosity. Not in terms of ideas, but he’s generous in such a way that he lets me be. He lets me decide kung ano yung gusto ko for my music (He lets me decide what I want for my music). He’s just there to really guide me. Because with all his experience in the music scene, he has to say something such as “I think this is good in terms of long-term goals.” I mean, I mention [Rico]’s name every time, every interview, but this album… para siyang expression ko (It’s like an expression of myself). It’s my own diary.

W: Looking back at Stellar and now with Asa Naman, how has your songwriting process evolved over the years?

M: Actually, almost the same. How I write songs before compared sa ngayon… wala (How I write songs before compared to now, none). Melodies and lines, naiisip ko (I think of them) at random times. When I’m very sad, parang nakaka-sulat agad ako minsan (it’s like I write fast sometimes), so it’s mostly like that. But I guess the difference would have to be the maturity of my POVs. I used to write many breakup songs and then pag binasa ko yung page na yun sa notebook ko parang, “Oh my gosh, ang immature” (I used to write so many breakup songs, and when I’d reread that page in my notebook, I’d go, “Oh my gosh, how immature”).  Hindi ko na siya ma-release ngayon kasi iba na yung headspace ko, but it’s funny to compare kasi ngayon it’s very mature. Not really mature na, mature-sounding but ibang perspective na siya ngayon. (I can’t release [those songs] now because my headspace is different, but it’s funny to compare them since I’m more mature now. Not mature-sounding, but my perspective is different.)

W: We know you’re a big Swiftie, and we saw your reaction to Fearless (Taylor’s Version). So we want to know, what’s your favorite Taylor Swift album?

M: Oh my gosh… every album is a different Taylor Swift as in. Pero yung all-time favorite album ko sa kanya 1989 (But my all-time favorite album of hers is 1989). Hindi ako heartbroken at that moment but every song… alam mo yung masaya? Sobrang saya niya na everytime na nagp-play ako ng 1989 non-stop, walang skip tapos every song doon napapasayaw ako talaga, nagiging happy ako (I wasn’t heartbroken at that moment but every song… is happy. The songs are so happy that everytime I play 1989 non-stop, there are no skips and each song makes me dance, it makes me feel happy).

W: You’ve gained quite a big following from your TikToks. Did you ever expect to blow up when you started posting?

M: Oh wow… TikTok surprised me a lot. I didn’t expect na sobrang lalaki yung platform na yun (that the platform would grow). I’ve had TikTok [since] a few years back, but I never really opened that app. I just posted two to three videos but now ang daming tao doon (but now there are so many people there). I think TikTok in general, sobrang supportive nila na crowd and hindi ko in-expect na magugustuhan nila yung mga videos ko, mga kalokohan na inu-upload ko doon (I think [the people on] TikTok are such a supportive crowd, and I didn’t expect that they would like my videos, the jokes I’d upload there). So, sobrang thankful ako (So, I’m really thankful).

Yes, TikTok is a source of entertainment, but it’s also my source of inspiration. Kasi ang daming music artist doon, sobrang dami—underrated ones, mainstream ones, ang daming new music (There are many music artists there—underrated ones, mainstream ones, there is a lot of good music). So whenever I’m exposed to new music, I get inspired. Parang, nakakapag-sulat ako ng song dahil sa excitement (I’m able to write a song because of my excitement).

W: This October, we’re celebrating Beauty Month. What’s one product—may it be makeup or skincare—that you cannot live without?

W: What else can we expect from you in the coming months?

M: In a few days, I will be shooting a movie so, sobrang excited ako sa role ko doon (I’m very excited about my role there). I can’t say much at the moment, but I hope they watch out for it. And more music. [Asa Naman] is not the last for this year; marami pa (there’s a lot more)!

RELATED: Catriona Gray on Validating Your Feelings and Grounding Yourself

Keep tabs on Maris Racal’s newest content, upcoming acting endeavors and music releases by following her on Instagram, Twitter, TikTok and Facebook, and subscribing to her YouTube channel. While we wait for her to drop more music, stream Asa Naman on Spotify.