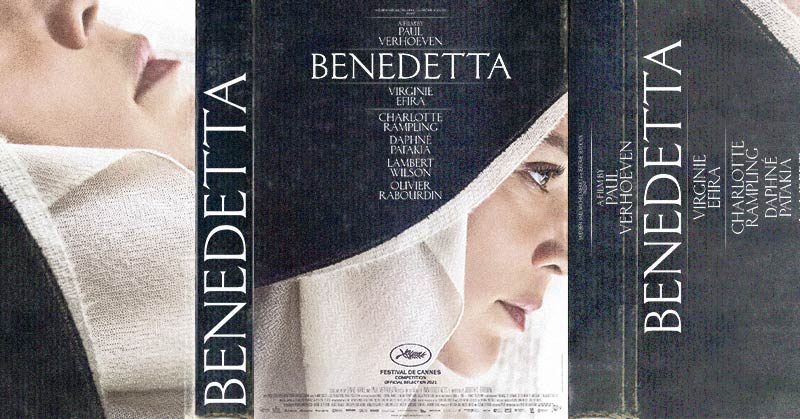 ‘Benedetta’ Movie Review: Guilty Of Blasphemy Or A True Portrayal Of Human Instinct?

Let’s break down the taboo of “Benedetta”

When you hear the word “nun,” the next words that follow aren’t usually “forbidden lesbian affair.” But in Benedetta, that’s exactly what you get. Officially, its synopsis reads: “A 17th-century nun becomes entangled in a forbidden lesbian affair, but it’s her shocking religious visions that threaten to shake the Church to its very core.”

At face value, Benedetta follows the story of Sister Benedetta Carlini, a young woman who has spent most of her life inside the confines of a convent in Italy. Brought there by her parents as child, she’s made a name for herself because of her devotion and religious visions. But then a young woman named Bartolomea knocks fervently at the convent’s doors looking for sanctity from her rapist father, and Benedetta’s life is forever changed.

After the two share a literal shit, the sexual tension officially becomes the monster in this film’s room. Every touch is highlighted; every stare is inescapably intentional. And you cannot help but think back to the first scenes of the film, where a young Benedetta is told: “Your body is your worst enemy.”

There’s no going around it: This movie demands to be discussed. But obvious taboo topics aside, does this Paul Verhoeven film stand out? Does Benedetta offer more than lewd scenes and an unflattering light on the Church? If you squint just right, then the answer is yes.

The film is about that struggle and difference in experience, in about what society and the powers that be dub worthy of praise or doubt or punishment. It’s about what we, as humans, are capable of doing. It shines a light on why we do what we do and believe what we believe, and how easy it is to unknowingly put blinders on ourselves just because we hear a story in exactly how the narrator wants the narrative heard.

RELATED: Revisiting “I’m Drunk, I Love You” and Why It’s Still Heart-Wrenching and Relevant

So when it boils down to it, is Benedetta worth the watch? Long story short, yes, it is. The film never tells us if Benedetta’s visions are real, if the fight is misplaced, if someone—anyone—is truly in the right. It’s a film that makes you decide on all fronts, so just leave your judgements at the door and keep your hands to yourself.