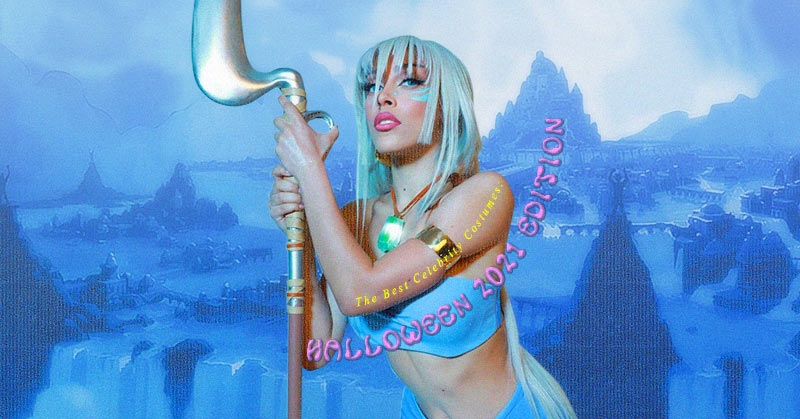 These celebrities understood the assignment and showed up for Halloween

Let’s be real, Halloween 2021 was no different from last year—at least not on our side of the globe. Parties and trick-or-treating were on the back burner. Instead, we spent the long weekend mostly at home, binge-watching horror flicks and getting some much-needed R&R.

Nonetheless, 2020 left us with one great lesson: party or no party, dressing up for Halloween brought the same satisfaction as flaunting our costumes IRL. That’s why the creative ones went ahead and brought out their alter egos for this season. And honestly, these people understood the assignment: go all out.

Up ahead, we rounded up the celebrities whose costumes won Halloween 2021.

Kida from Atlantis: The Lost Empire

Kicking Halloween a week earlier than the rest of us, Doja Cat channeled Kida from Atlantis: The Lost Empire for her 26th birthday party. With the theme “Underwater,” it’s safe to say that the star of the show arrived “Best Dressed.”

Sara Bellum from The Powerpuff Girls

But Doja Cat’s expert costumes don’t end there. Last year she went as Tyra Banks from America’s Next Top Model for Kendall Jenner’s birthday party. This year, the rapper kept the ginger motif alive as she dressed up as Ms. Sara Bellum from The Powerpuff Girls—complete with a tiny little Mayor hanging off from her.

(Miss) Creature From the Black Lagoon

How extra is extra? Let Ariana Grande show you. The singer won Halloween by going as Miss Creature from the Black Lagoon with a hyperrealistic mask and gloves, while her husband, Dalton, played the part of the Handsome Scuba diver. The couple capped it off with a movie poster plucked from the 50s. Dedication, I tell you.

The Kardashian-Jenner clan takes Halloween very seriously. But every year, there’s always one sibling (or two) that outdoes the entire family. So if the title went to Kendall and Kylie in 2020, the crown for Best-In-Costume this 2021 goes to Kourtney Kardashian and Travis Barker, who went as Kim Boggs and Edward Scissorhands.

Lil Nas X definitely shapeshifted into the Dark Lord for Halloween—to the point that he’s completely unrecognizable. In true Hogwarts culture and a play on Montero, the rapper called himself “he who must be called by your name.”

Younghee from Squid Game and LALISA

Lisa and Jisoo of BLACKPINK spent Halloween together dressed as two icons from this year. BLACKPINK’s youngest dressed as Younghee of Squid Game, ready to catch anyone moving during a game of Red Light, Green Light. Meanwhile, Jisoo took her costume closer to home and went as Lisa from her LALISA music video.

Inosuke and Nezuko of Demon Slayer

On Cleo’s birthday, she and her famous uncle dressed as Nezuko and Inosuke from the anime Demon Slayer (Kimetsu No Yaiba). The hot-headed Demon Slayer Corps member and Tanjiro’s demon sister came alive. Props (pun intended) to Bretman’s authentic-looking dual katanas and Cleo’s improvised bamboo muffle for taking their getups to the next level.

RELATED: You Can Now Stream Demon Slayer the Movie: Mugen Train For Free

Sarah Lahbati-Gutierrez rounded up the whole fam to transform into the Peaky Blinders gang for Halloween. Complete with convincing bruises, scars and enough glares to scare you off, this family owned this holiday.

Photographer BJ Pascual pulled up in NYC dressed as Zsazsa Zaturnnah, the LGBTQIA+ icon from the realm of Philippine komiks. His version of Zsazsa Zaturnnah enjoyed a Halloween party with Diva Soria, who went as Darna, and a surprise friend. We stan strong, independent women superheroes of the Philippines.

Did we miss any celebrities whose costumes absolutely won Halloween? Let us know in the comments below!