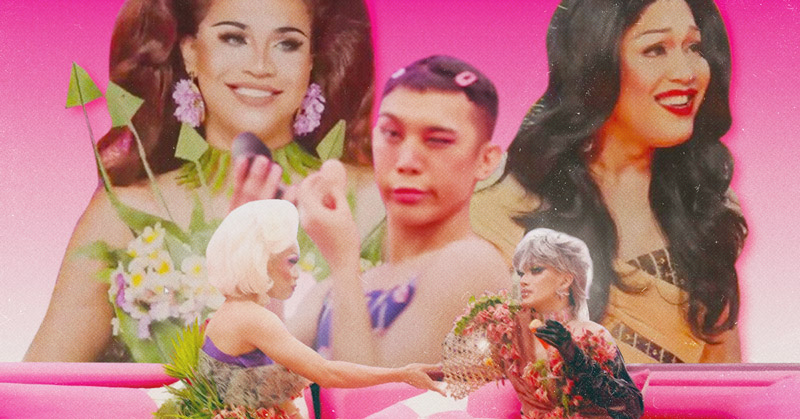 These Drag Race Philippines Moments Will Go Down in Herstory

We’re already on the last stretch, mga misis! In a few hours, Drag Race Philippines will crown the first-ever winner of the local franchise. We laughed, cried, critiqued, said what we wanted and rallied fiercely behind our favorite queens. Competition seems tight now that we’re down to the final four: Marina Summers, Xilhouete, Eva Le Queen and Precious Paula Nicole are vying for the crown.

But let’s put aside all the shade, neck-and-neck maxi challenge races and personal feelings with the franchise in its entirety. While the first season—and hopefully not the last—of Drag Race Philippines wasn’t perfect, it brought a lot of things to the table. The queens gave us funny exchanges, showed the world what true sisterhood looks like and had essential conversations long overdue. A lot of moments definitely left a mark. Cases in point: We needed the iconic Precious Paula Nicole x Regine Velasquez crossover and Viñas Deluxe’s iconic dress from the Sagalamazon design challenge.

Up ahead, we list down a couple of Drag Race Philippines moments that will go down in herstory.

Turing is known for her nurturing and caring energy, even providing her fellow contestants and the audience with some words of wisdom. “You just had a bad day. It doesn’t mean you have a bad drag,” will forever resound with the remaining contestants. Marina kind of echoed the sentiment in Eva Le Queen’s breakdown in Untucked—even if the final cut says otherwise.

One of the season’s most popular and iconic runways is from episode three: Shake, Rattle and Rampa. The queens bring in their best horror glam, and safe to say they left us terrified in the best way possible. Can we talk about Viñas Deluxe‘s manananggal lewk or Precious Paula Nicole giving birth to not only one, but three tiyanaks? Icon behavior!

But more than the looks, it also brought us some iconic lines. Gigi Era’s “When I think of tiyanak,” spiel has become a line that we’ll keep on quoting.

RELATED: Star Cinema Horror Movies You Can Watch for Free on YouTube

While Snatch Game episodes have become the most polarizing topic of any and all franchises, we can’t deny that the run from Drag Race Philippines is one of a kind. It’s all thanks to the impeccable performances by Marina Summers and Eva Le Queen (Black Thunder x Tampalpuke supremacy!), the switcheroo struggle of  Viñas Deluxe to Xilhouete’s unmovable face. While some flew high and some tanked, it still stands as a Snatch Game we won’t ever forget.

Who said that beef only exists between the queens? As it turns out, tensions between the contestants and guest mentors are also brewing. We’re talking about the tension between the strict Sir Douglas Nierras and Xilhouete, who just needs more time to pick steps up. Their exchanges in the girl group challenge and Rusical preparations gave us material to jump off on. While the theories exist because Twitter users and their knack for memes, it still feels fulfilling if we get a lip-synch battle between the two. Just for closure.

Pop Off Ate by the Flexbomb Girls

If this track didn’t make it to your most played or inhabits your brain during no-thoughts-head-empty moments, then did you really watch Drag Race Philippines? Hats off to Pink Pussy Energy for an equally addictive version, too. Love it or hate it, you’ll be singing to both versions.

RELATED: Everything You Need To Know About discovery+

When we had the time to chat with all 12 queens ahead of the double premiere, many told us that the show packs a lot of Filipino flavor. Not only did the show deliver, but they also brought back games important to a lot of young queer Filipinos. Yes, the iconic Chinese Garter game included. But while the game itself sparks nostalgia already, it’s never complete without the playground banter. That, in itself, is the best thing from our youth. The queens did not disappoint in their performances as the children you probably played with outside. Yes, even the kids whose comments were, most of the time, out of pocket.

Family and sisterhood are forever

Perhaps one of the most heartwarming things about Drag Race Philippines is its ability to bring people together. In episode eight, we saw the value in family, biological and found. While tension bubbled and burst in Untucked episodes, the contestants value each other and managed to put their issues aside when one needed comfort the most.

Eva Le Queen said it best, “I’m super damn grateful for all the conversations na hindi mangyayari sa labas ng Drag Race (that won’t happen outside of Drag Race) and only happened here. The family that I get to see in everyone, who I don’t see eye to eye [with] sa labas (outside). The appreciation I have for you guys, for myself and for the future of drag in the Philippines.”

RELATED: 6 Must-Download Apps for Those Who Love to Stream

Sure, we don’t exactly know what happens behind the scenes. But so far, the franchise has given us a lot to love not only because of its theatrics but for the heart they put into it. So while the first season of Drag Race Philippines isn’t perfect, it’s still an unforgettable franchise. Of course, it has a lot to improve on. But it also gave our local drag scene visibility. And by extension, the show also brings LGBTQIA+ issues to the forefront.

Got any other moments you want to put on the list? Sound off in the comments below!