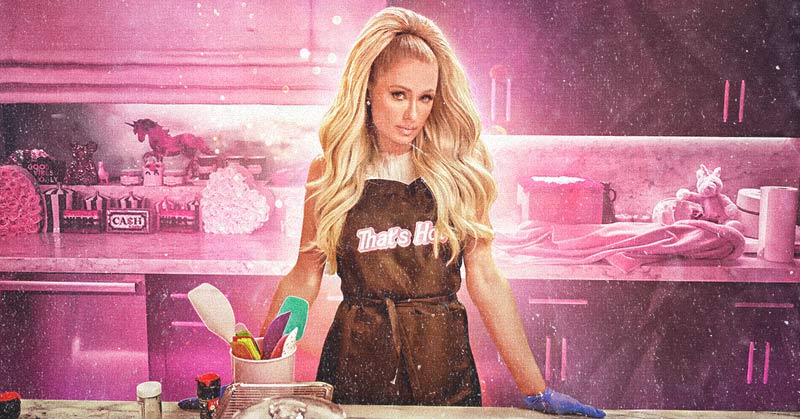 The Best of Cooking With Paris

Cooking With Paris is more than just a cooking show

Many celebrities are showing off different sides of themselves by feeling the heat of the kitchen (pun intended.) You’ve got Run! BTS’s multiple culinary episodes that have involved under whipped merengue spilled on nicely coiffed hair and Selena Gomez’s Selena + Chef series to where her knife set has gotten a lot of compliments. But in this day and age, we can’t help but play favorites, especially when there’s a show that consciously or unconsciously reminds us of the 2000s.

Whimsical music, bejeweled everything and the return of “That’s hot!” It’s pink and adorable, and we love seeing it again and again. Since her documentary, This Is Paris, dropped, Paris admitted that her dumb blonde party girl image was all that. An act. And she plays the part perfectly in Cooking With Paris.

While the Netflix series doesn’t show her trying to toast sandwiches with a clothes iron this time around, her attempts at whipping up good meals in fabulous clothes and even better company make each episode worth the watch. Not yet convinced? Let me tell you the best things about it.

First of all, is it really a Paris Hilton production without iconic looks? Grocery stores are a runway for her, as she dons only the best ‘fits while she buys ingredients the day before. While waiting for her guests, Paris lounges in her iconic Juicy Couture tracksuits in different colors, smack dab in the middle of Y2K’s renaissance. Then by the time they swing by, she goes all-out glam.

Her secret ingredient for the program isn’t some treasured family recipe. Instead, it’s the killer ‘fits she isn’t afraid to get down and dirty in.

If you thought the extravagant outfits were already over the top, just wait and see how her abode gets decorated on the day she has her celebrity friends over. Paris’s chief of staff, Charlotte, and their go-to events planner, Wife of the Party, like to put out all the stops to make the meal feel more like a feast. Each cooking sesh ends with a dinner in her dining room that’s gets perfectly transformed into a different world. Paris and Saweetie enjoy their food in a tropical wonderland straight from Tulum, Mexico, complete with a taco-shaped piñata. Heck, Paris even had her dining room transformed into her favorite Italian Restaurant as she dines with Demi Lovato.

If you’re coming into the series expecting to see a new side to Paris Hilton or to learn a few tricks yourself, then you might not get what you’re looking for. It’s playful from the get-go, an all-frills, all-sugar cooking program meant to show her having fun and not much else. Paris doesn’t take herself way too seriously as she plays her perfected persona while frolicking around grocery aisles and eating cereal out of the container. Instead, she’s curious and carefree, soothing the stress of the kitchen with her airy character.

RELATED: Sandra Oh’s “The Chair” Is a Comedy of Errors With Timely Lessons

In Cooking With Paris, Paris and her guests teach us to just fully enjoy life as it goes. Cook in couture, peel ingredients with long, glamorous nails and whip up a meal in fingerless gloves. Accidents in the kitchen can be happy, whether or not your experiments are salvageable dishes or not. As long as you’re happy, sliving (Paris’s own term that mixes slaying it, killing it and living your best life in one), then why stop?