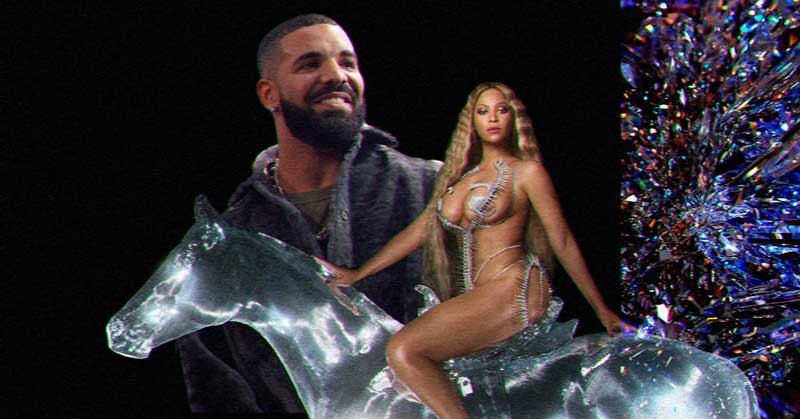 Looks like our post-pandemic agenda involves losing ourselves to dance

From Dua Lipa’s disco-pop bomb Future Nostalgia to Lady Gaga’s colorful hyperpop opus Chromatica, dance music continues to define the music of the 2020s.  Heck, there are even some tracks off Harry Style’s Harry’s House that are bound to make you move. Perhaps it’s the longing for social gatherings and the trend of converting our bedrooms into dimly-lit clubs, but dance music continues to remove the unsettling feeling of stagnation. And after throwing it back to funky pop tracks fresh off an 80s-era roller rink’s playlist, it seems that another genre of iconic dance music will make its way to our airwaves. 90s House continues to stage its comeback, thanks to two music moguls: Drake and Beyoncé.

As Beyoncé continues dropping bombs on her upcoming album Renaissance, reports say it’s “primarily a dance record.” Break My Soul, the first single off the record samples Big Freedia’s Explode. We can only assume that Queen Bey’s vision of post-pandemic rebirth seems to be embracing and prioritizing yourself. Break My Soul’s euphoric rhythm, coupled with Big Freedia’s energetic adlibs and Beyoncé’s soul-shaking vocals bring forth an anthem of rising from the ashes and a beckoning of release. She sings with such contagious confidence, “I’m on that new vibration; I’m building my own foundation.”

Two days earlier, Drake released Honestly, Nevermind, but many were quick to dismiss another album of sonic lamentations on love. Some even call the record “A compilation of tracks you hear in Forever21 and H&M.” Like it or love it, Drake’s foray into an album focusing on a specific electronic dance music genre helps usher in this trend’s revival. Honestly, Nevermind might set the stage for other iconic tracks to dominate our playlists. So say goodbye to 808s and trap sounds and hello to four-by-the-floor beats and electric effects.

The songs of 2022 will transport us to the lively dancefloor.

RELATED: Cheat Codes Exists To Explore What Lies Beyond the Bounds of Music

But along with the resurgence of 90s-era house music comes a reclamation process. According to The Guardian, 90s-era house music has roots in Black and queer spaces. The music began specifically in the underground clubs of Chicago, with DJ Frankie Knuckles at the helm. However, when the genre broke into the mainstream, white people slowly entered the scene before effectively taking ownership over the genre. From Daft Punk to David Guetta, the world fell back on identifying house music with predominantly white DJs.

With Beyoncé and Drake fully exploring these genres with their new releases, they continue to reclaim a genre started by their own people. For Honestly, Nevermind, Drake recruits South African house veteran Black Coffee as the executive producer. Meanwhile, Beyoncé samples a 90s house music hit in Break My Soul: Robin S’s Show Me Love. The two icons are reviving a conversation and reclaiming a ground that’s theirs while spotlighting fellow Black creators and veterans in the scene. They’re beckoning a new generation of audiences to peel back the layers of house music while enjoying it simultaneously.

But tbh, it’s hit or miss

The difference between these two releases, though, lies in their executions. Beyoncé’s Break My Soul effectively became the United States’ anthem for Pride Month 2022, as it got (and continues to be) played at full blast and received with warm reception. The moment it starts, everyone throws all caution through the wind and gets lost in the music, echoing Big Freedia’s mantras of “Release ya anger, release ya mind” or Beyonce’s motto: “You won’t break my soul.” Perhaps this shining optimism and putting-myself-first mentality offer a breath of fresh air for many, having them look forward to better days.

Meanwhile, Drake’s newest record, released nine months after his anticlimactic Certified Loverboy, falls even flatter. Aside from favorites such as Sticky, Massive and Jimmy Cooks, it comes as a surprise that the rapper’s minor explorations on 90s house sound better than the full foray. With the addictive One Dance, seductive Take Care and dancehall-house hybrid jam of Get It Together, we’d expect Drake to pull it off fully. But it’s thanks to his almost emotionless crooning and lackluster lyrics revolving around heartbreak. Honestly, Nevermind sounds better for passive and ambient listening than an album that requires your full attention. Why? Because of its regurgitated message on love and pain.

But perhaps that’s what has Drake and Beyoncé rekindling the spark for original house music in 2022. Paying homage to Black creators who came before them with amazing hits and, sometimes, lukewarm listens. It doesn’t matter that it has to be extremely, show-stoppingly good. Drake’s here to let us get used to the sound and its origins, while Beyoncé exists to bring the bar farther up for the world’s appreciation. So aside from remaining limited to festivals and one-off viral singles, a new wave of listeners can fully appreciate house music yet again. At the end of it all, 2022 will push you to lose yourself to dance.