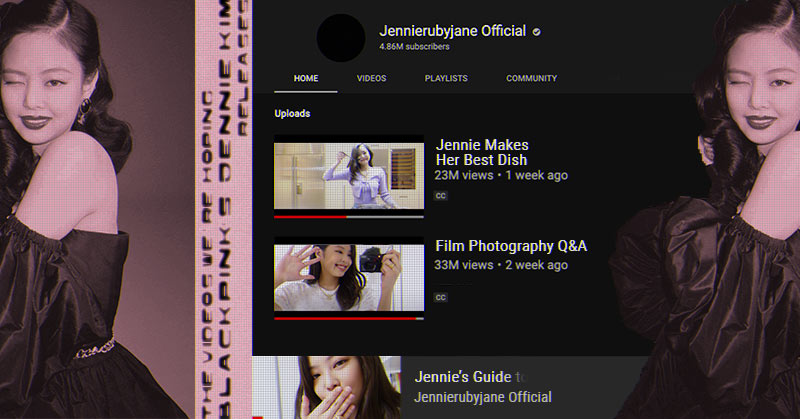 Jennie’s on YouTube! Here Are the Videos We Want to See on Her Channel

With a full album and a Netflix documentary under their belts and a virtual concert and Rosé’s solo debut on the horizon, one thing is for certain: BLACKPINK’s fans are winning. After years of asking for more songs, more frequent comebacks, more anything, it’s clear that the drought has finally ended. For now, all is well. The girls are booked and busy, and have been providing plenty of content to keep BLINKs satisfied.

Jennierubyjane Official, named after Jennie’s Instagram handle, has close to five million subscribers as of writing. Launched on her birthday, Jennie captioned the announcement of her first upload with “Just a lil something for blinks,” graciously returning the support she’s received from her fans since day one.

Her first and only video at present is a sweet four-minuter entitled Hello world . From Jennie. Despite its straightforward title, the video covers all the bases of an ambitious YouTube upload: talking spiels, an OOTD moment and a cover of a well-loved Disney track. Now that Jennie has started a fresh chapter as a YouTube creator, we can’t help but get excited over the possibilities from here on out.

And so, we’re doing a little wishful thinking. Below, we’ve rounded up the videos we’re hoping to see on BLACKPINK’s Jennie Kim’s YouTube channel:

RELATED: The Cat’s Out of the Bag: BLACKPINK is Globe Telecom’s Newest Ambassador

We know Jennie is a HERA endorser, that she loves a good double-cleanse and loves her lipstick, but we’re eager to know the rest of her secrets to looking as good as she does. If Vogue doesn’t tap Jennie for an episode of their iconic Beauty Secrets series (a missed opportunity, tbh!), we’re hoping to see a GRWM-style video on her channel instead.

There are what’s in my bag videos and even what’s in my trash videos, but what we’re truly eager to see: Jennie’s Instagram bookmarks. Her posts on the platform make it clear: she’s got a good eye for color and composition—plus, she’s got an entire account dedicated to her interest in film photography. We’re curious to see what kind of content inspires the gal who inspires so many of her own fans.

We confess, we’ve been watching cooking shows and this video of NIKI’s turmeric latte recipe a little too often.

Naturally, we’re hoping to see a little kitchen content from Jennie’s channel, too. After all, we know for a fact that BLACKPINK loves food. Jennie, Jisoo, Rosé and Lisa were constantly surrounded by food in the BLACKPINK House. We saw Jennie and Jisoo make “not bad but not good” snacks in their documentary. The obvious next step? To ask Jennie to go solo one more time—but this time, in the kitchen, with a recipe of her choosing.

We only ever get to see bits and pieces of their lives through variety shows, Instagram broadcasts or VLIVEs, but idols’ schedules are more hectic than most of us will ever know. Since Jennie and her members rehearse, record and shoot ‘round the clock, we’re hoping to see her take a little time to get her well-deserved R&R.

One of Wonder’s pre-corona video series, Wonder Plays Dress-Up, is a snappy styling tutorial highlighting trends of the moment. We did an episode on the color yellow when it was trending on the runways, and then an episode on red lipstick, slip dresses, androgynous dressing and layering. It’s a moonshot, we want to see Jennie give this sort of styling video her own chic, high teen spin. After all, she’s been at the forefront of so many fashion and beauty moments; we’re certain even casual fans would be compelled to learn a thing or two from the trendsetter herself.

What kind of content do you want to see on Jennie’s YouTube channel? Sound off in the comments!