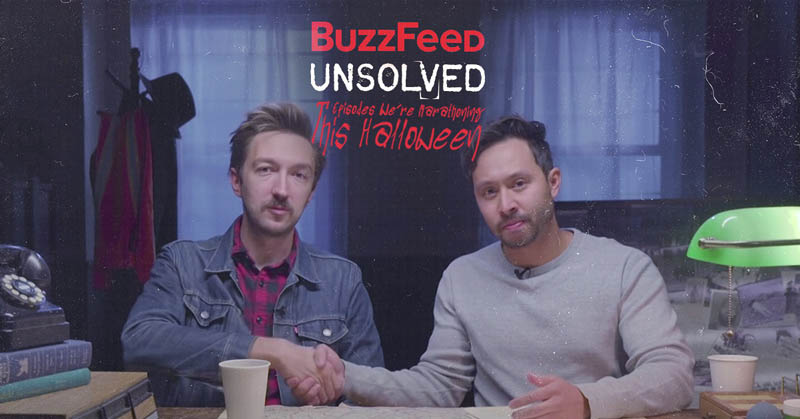 “Goatman! I’m dancing on your bridge, it’s my bridge now!”

Do you ever get that urge to binge-watch horror movies, ghost-hunting shows and true crime documentaries the moment October rolls around? As everyone puts the thought of Christmas aside for a month, we set our sights on the thrills of Halloween. We dream of trick-or-treating, dressing up as anything, going to parties, inhaling tons of candy and marathoning horror movies. However, for those who like getting spooked without the fear of getting nightmares, it seems like a healthy balance of terrors and laughs will scratch that Halloween itch. Enter: Buzzfeed Unsolved: Supernatural.

Ryan Bergara and Shane Madej have created a reputation as famous ghost hunters. Moving up from curious amateurs hoping to answer the question “Are ghosts real?,” the duo became professionals and even clocked in seven seasons of their iconic YouTube show Buzzfeed Unsolved: Supernatural. Throughout their scarce ghost-hunting shenanigans, the two come up with compelling evidence and even better meme material. Ryan and Shane may have moved on to Ghost Files, but there’s no harm in going back to the classics.

Scroll ahead to see which episodes of Buzzfeed Unsolved we’re binge-watching for the best spooks, shrieks and laughs this Halloween.

3 Horrifying Cases Of Ghosts And Demons (season one, episode three)

In 2016, BuzzFeed probably couldn’t have predicted that this would become a recurring thing, hence a three-in-one exploration of the supernatural. Before leaving to prove (or disprove) that ghosts and demons exist, Ryan and Shane consult an experienced exorcist on what to do. Then, once they were locked and, in Ryan’s case, loaded with holy water, they set out to explore three spots: the unwinding Winchester Mystery House, Mexico’s creepy Island of Dolls and the demonic Sallie House in Atchison, Kansas. Of course, the best thing about this episode is the flashbacks to Fr. Thomas’s advice before cutting to Shane going against everything he said—a foreshadowing of the chaos we’d learn to love.

The Ghosts and Demons of Bobby Mackey’s (season two, episode one)

The dynamic duo explores a bar named Bobby Mackey’s, whose dark history made it a hotspot of the supernatural. Ryan and Shane are pretty much still new to this thing, so Shane can easily spook his partner into doing things he doesn’t want to. Asking the most unbelievable questions that Fr. Thomas might not approve of, the skeptic manages to trick the believer into talking to the spirits as well. The two even spend time alone in the well room, the so-called portal to hell. The evidence they collected is pretty much 50-50, but it still gives us the creeps.

PS. This episode also has Shane’s best line: “Hey there, demons. It’s me, ya boi.”

Here’s the thing, ghost-hunting doesn’t always yield the best results—sometimes none at all. Buzzfeed Unsolved: Supernatural has some episodes ending with little evidence. Nonetheless, Shane and Ryan’s chaos can make up for the lack of spooks, as seen in their exploration of the Demonic Goatman’s bridge. They tried communicating with it through a Ouija board and taunting the entity, only to come up with nothing. Shane, however, left us with another iconic line: “Goatman! I’m dancing on your bridge; it’s my bridge now!”

If we’re talking about evidence, then this episode has lots. Ryan and Shane do things differently for the fifth season’s finale. Instead of investigating famous landmarks and hotspots, the two ghost hunters respond to a house call. The place’s residents are one of their coworkers and her family, Hannah Williams, who has creepy experiences with a couple of entities. In addition, this episode marks the first use of the Ovilus, which lets them communicate with spirits better so they can understand the intentions the unseen forces’ intentions toward the family. While the exploration ended with more questions than answers, this still validated the family’s experiences in the home.

RELATED: Will You Survive A Horror Movie? Take This Quiz To Find Out

The Demonic Possession of the Conjuring House (season seven, episode one)

This eerie house in Rhode Island inspired the world-famous Conjuring franchise. Early on, doors already swing completely open, the spirit box captures unintelligible voices and Maglite flashlights turn on and off on command. If anything, the evidence seems pretty compelling. But while the episode appears creepy, Shane and Ryan’s hilarious chemistry offset all these things captured. They used heat maps to measure their butts, don cat ears to summon a ghost dog, misuse the water guns with holy water and, of course, taunt demons.

To close the final season and Buzzfeed Unsolved: Supernatural, Ryan and Shane return to the Sallie house. Ryan now has the newfound confidence of an experienced ghost hunter who faces all the entities in the place head-on, even taunting Sallie and having his turn lying on a pentagram. The two come up with pretty convincing evidence thanks to the spirit box, the flashlights and clips of things moving in the dark. If anything, they really closed the season with a bang.

RELATED: Science Has Spoken: This Is the Scariest Horror Film Anyone Has Ever Watched

As Ryan and Shane ended their chapter with Buzzfeed Unsolved, the two have moved on to larger-scale investigations with Ghost Files. Spoiler alert: their evidence so far is pretty compelling, so tread at your own risk. So happy Halloween! Laugh out loud, scare yourself shitless, and enjoy mulling over the question: “Are ghosts real?”