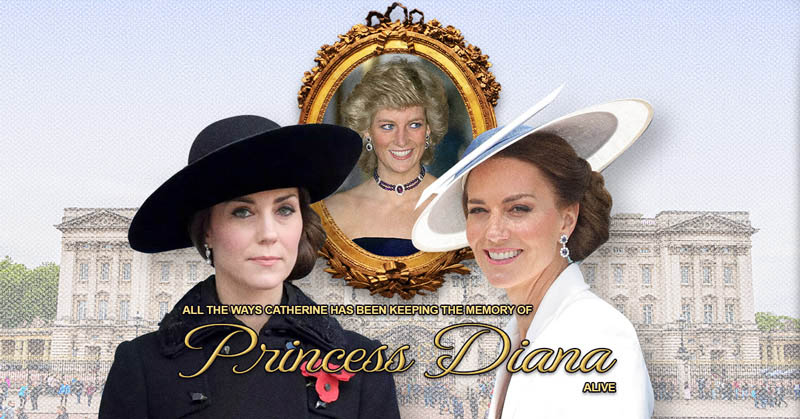 From dresses to jewelry, Princess Kate pays tribute to the late Princess Diana in more ways than one

Catherine has become a style peg for girls and women across the globe. As the world has watched her fashion evolution unfold from Prince William’s fiancée to the Princess of Wales, we were rooting for her graceful transformation at every step. We continue to stay on our toes as we witness each red carpet, official visit and even casual snaps from her personal time with the young princes and princess.

The public has learned to look forward to Kate’s ensembles, more so to see a correlation between her and the late Princess Diana.

It’s no secret that Catherine Middleton takes inspiration from her mother-in-law when it comes to attending social events—it serves as a reminder of the beloved royal. Kate has graciously dressed in similar wear, which unsurprisingly puts the media in a fashion frenzy each time. Let’s look back at some moments that made the headlines:

1. When Kate joined Prince William on a Scotland tour, 2021

Scotland holds a special place in Prince William’s heart. The country, after all, gave him the chance to meet Kate at university, but it also allowed him to grieve when he learned about his mother’s passing.

Kate seemed to have these in her thoughts as she wore a royal blue attire that reminded the public of Diana during her South Korean trip in 1992. The royals’ blazer and pleated skirt combinations were almost identical.

2. When Kate dropped off Princess Charlotte on her first day of school, 2019

A floral frock was Kate’s go-to when she dropped off Princess Charlotte at Thomas’s Battersea in 2019. It’s billowy and light, almost like the dress that Diana wore as she dropped off a young Prince Harry at school in 1992.

The two dresses also shared a color palette of pink and white, but differed in the presence of black by way of Kate’s leather belt.

The annual Remembrance Day Service is done in commemoration of the United Kingdom’s soldiers who passed away during the World Wars. The British royal family is expected to dress in black with symbolic red poppies pinned on their clothes.

In 2016, Kate was believed to also pay tribute to her mother-in-law with a black wool lip coat. Her attire had an undeniable resemblance to how Diana was dressed for the same event in 1991—her hat and how she placed the poppies were the same.

RELATED: No Longer A Flight Away: Singaporean Brand The Editor’s Market Lands In Manila

There’s no doubt that Catherine Middleton, the Princess of Wales, stuns us with her ensemble choices, especially with her choice selection of jewelry. The blue sapphire gemstone has become Kate’s signature accessory over the years, which William gifted to her as an engagement ring.

It all started when William proposed to Kate. After Diana’s death, the 12-carat Ceylon engagement ring became an heirloom that Harry was said to actually possess—yet, he gave it to the elder royal when he witnessed Prince William’s love for Kate. The ring didn’t go through a royal lineage before it became Princess Diana’s engagement ring, but that doesn’t deter its importance.

2. The Double-drop Sapphire and Diamond Earrings

This particular pair of earrings was known to be a staple for Diana. It was there in her most iconic moments (including the 1996 Met Gala and White House visit, wherein she shared a dance with John Travolta), so the public has always pinned it to be her favorite. The double-drop earrings were first seen on Kate at the Trooping the Colour parade in 2022—it stood out from her white-and-navy-blue hat and ivory coat dress, as she celebrated the mark of the former Queen Elizabeth II’s birthday. It was the perfect match for her engagement ring.

RELATED: Penny Pairs: How This Husband-Wife Duo Created the Jewelry Brand Beloved by the Internet

The style correlation between Catherine Middleton and Princess Diana can’t be ignored—and, honestly, we can’t wait to see more.