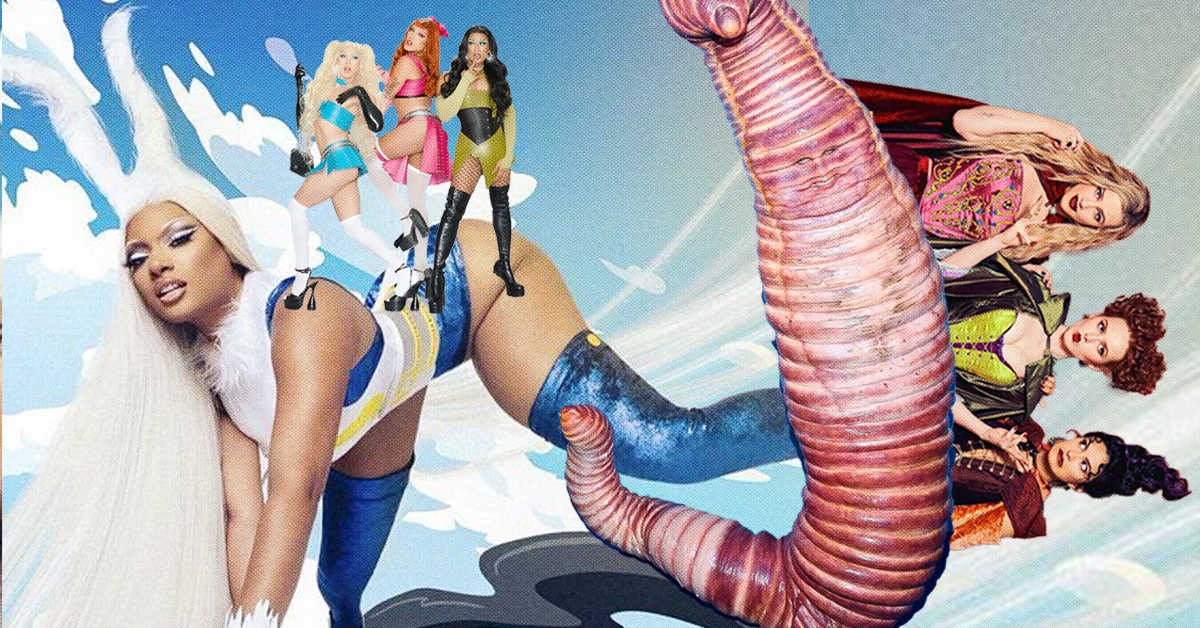 The year 2022 has given us a lot to enjoy and look forward to—Halloween included. We’re no longer forced to spend spooky season indoors. Instead, everyone gets to dress up, come together and party in their best Halloween costumes. So, it seems natural for everyone to pull out all the stops. Have a whole photoshoot! Dress up to the nines! Spend hours on your look and flaunt it all night! After staying indoors and getting nifty, we can now enjoy our newfound freedom. From local musicians to Hollywood’s A-list celebrities, we’re all living for the looks presented over the weekend.

So without further ado, here are the winners for the 2022 Edition of Halloween Costumes:

This team of celebrity artists comes together to reimagine our favorite superhero trio and their arch-nemesis in the name of Halloween. Photographer BJ Pascual, makeup artist Jelly Eugenio and hair stylist Renz Pangilinan show their best versions of Bubbles, Blossom and Buttercup, respectively, in these amazing leather sets. Miss Universe 2015 Pia Wurtzbach embodies Mojo Jojo and transforms the villain into a queen. Safe to say they all have us gagged.

But before BJ Pascual and Jelly Eugenio put on their superpowered costumes, the two also worked their magic behind the scenes. You obviously wouldn’t have missed these photos—they were all over everyone’s feeds and timelines when this dropped. Jelly Eugenio’s Disco Heaven features six of the hottest gals in their best glam and gore, giving major final girl vibes with each shot.

ICYMI, Zild released his third album, Medisina, last October 28. To celebrate its release, he held the Gabi Ng Paniki: A Halloween Party + Medisina Launch a few days later—undoubtedly one of the biggest costume party-slash-gig ever. He performed his set looking like Edward Scissorhands, a look mirrored by his entire band.

The Wizard of Oz

Bretman (Da Baddest) Rock recruits his favorite partner in Halloween costume crime, Cleo Amore, to complete the cast of The Wizard of Oz. If anything, Cleo always has the best childhood experiences when uncle Bretman is around. And that includes a two-person team becoming the entire list of characters.

TikTok star and singer Bella Poarch channels her inner Darna for Halloween! Listen to that perfect “Darna!” yell—she has the makings for this iconic role.

If you religiously follow Megan Thee Stallion, you know how much she loves anime. After her Todoroki Shouto-inspired photoshoot with Paper Magazine, she returns to her Boku No Hero Academia roots and cosplays pro hero Mirko. In case you didn’t know, the manga author’s assistant referenced old Megan The Stallion photos for a couple of Mirko sketches—a full circle moment, TBH.

The Riverdale girls are inseparable, even with each of them doing their own thing. In 2021, Madelaine Petsch and Camila Mendes went as Daphne and Velma from Scooby-Doo. This year, they brought in Lili Reinhart to complete another iconic blonde-ginger-brunette trio from another sneaky, spooky title: Hocus Pocus.

RELATED: Do Revenge Puts A Thrilling Twist To The Teen Movie Genre (And Delivers)

Best friends, Victorious alumnae and impersonation icons Elizabeth Gilles and Ariana Grande bring their A-game for their Halloween costumes. The two went as Christy Cummings (Liz Gilles) and Sherri Ann Cabot (Jennifer Coolidge) from Best In Show, complete with professionally shot skits. Liz Gilles captions the post with, “We did this in May.” Talk about preparation!

Joe Jonas and Taylor Swift circa 2009

Youngest JoBro takes advantage of his genes by dressing up as his brother, Joe, from the 2019 movie Jonas Brothers: The 3D Concert Experience. Taylor Swift then appeared after Burnin’ Up to perform a duet with her ex-boyfriend. So Frankie needed the help of his girlfriend, Anna Olson, to complete the whole thing. Not going to lie, that’s a pretty Fearless thing to do.

The Queen of Halloween Costumes, Heidi Klum, comes back this year in the best and most ridiculous getup yet: a worm. It took her and her team 12 hours of pure preparation, styling and makeup to look like a hyperrealistic creepy crawlie—dedication much? Well, you know what they say. The early bird becomes the worm, or something.

PSA: If everyone loved Heidi Klum even if she became a worm, your partner should love you as a worm, too. Don’t settle.

For more bonus looks, check them out right here:

Did we miss any celebs whose Halloween costumes brought the house down? Let us know in the comments!