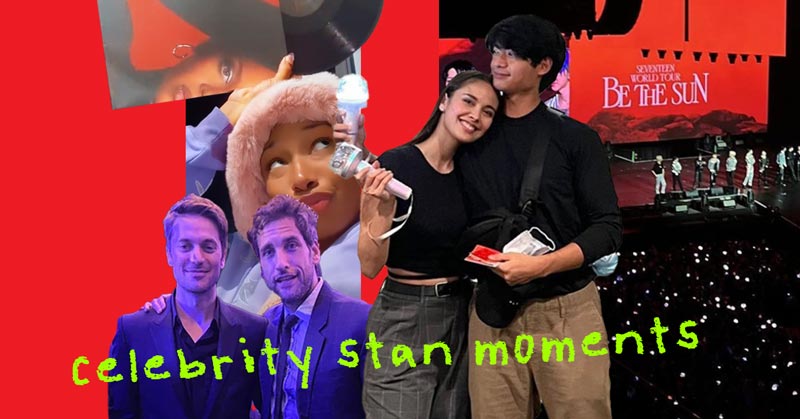 “My Wife’s Crush:” Seven Celebrities Who Had Their Major Stan Moments

You can take the person out of stanning, but you can’t take the stan out of the person

Whether you’re a newly minted K-pop fan, a devoted TV show follower or just really in awe of Beyoncé’s overall existence, we can’t deny that everyone has a bit of a stan in them. We’ve fawned, fainted, fangirled, fanboyed and fantheyed over different people: actors, musicians, our favorite internet personalities—you name it. The innocent joy of meeting someone you’ve admired from afar is incomparable and contagious, even if you’ve reached superstar status in your own right.

Up ahead, we list down seven celebrities who had their major stan moments.

A post shared by France in the Philippines (@frenchembassyph)

Sometimes, the odds aren’t really in a fangirl’s favor. And in the case of Solenn Heussaff, her husband met her crush instead of her. In an Instagram story, Nico Bolzico posts a photo of him posing with Emily In Paris star Lucas Bravo. His caption makes the interaction a lot funnier as Nico writes, “Met my wife’s crush last night! He’s way better looking than me!” How humble of him. Nonetheless, we hope that Solenn can meet Lucas Bravo soon—you know, for the full circle moment.

In case you didn’t know, Bravo plays Chef Gabriel in the series. He visited the country for a gala to celebrate the 75th anniversary of diplomatic relations between France and the Philippines.

If you’ve scrolled through Megan Young’s socials, you know she’s also a full-fledged K-pop stan apart from being a gamer, keyboard customizer, beauty queen and actress. Megan has her lightsticks and expansive photocard collection (sleeves included!), and she even managed to get seats to SEVENTEEN’s Be The Sun in Manila—talk about determined and lucky. Perhaps the cherry on top of this stan moment is that she gets to share this with her husband, Mikael Daez, who also supports her stan life. Yes, even of the merch hauls.

We often think that the Megastar Sharon Cuneta would be used to people fawning over her, but it turns out that she also has her own die-hard stan moments. Most of the time, her daughters Kakie and Miel expose her while they share the same joy in fangirling. After collecting lightsticks and photocards at a couple of election-related rallies, Ate Shawie saw NCT 127 live at the Manila leg of the group’s The Link tour. In an Instagram post, she showed a clip of herself enjoying the show and screaming along with the loyal NCTzens. Next to NCT, she also loves their seniors, SHINee and EXO. You know what? Taste.

Hollywood actors also have nothing against the K-pop world’s charm. Many celebrities proudly proclaim their ARMY, BLINK and ONCE memberships—from John Cena to Sabrina Carpenter. One of the fascinating names to participate in these fandoms is Teen Wolf and All Too Well (10 Minute Version) actor Dylan O’Brien. In 2019, he and his best friend, Max Minghella, watched BTS during their Love Yourself Tour in LA. Last year, O’Brien also fanboyed to Thomas Brodie-Sangster about BLACKPINK and wilded out when he saw them at the 2022 MTV VMAs. TBH, he’s 100% valid for that.

In one of Stray Kids’ performances for the 2021 reality show Kingdom, the group made a ton of references to Ryan Reynolds’ beloved Deadpool. This prompted their loyal STAYs to create edits, one of which caught the attention of the actor himself. While Felix broke the fourth wall style in the performance, leader Bang Chan is the bigger Ryan Reynolds fanboy. So, of course, he seized the opportunity to reply to the actor, and a friendship was born. After trading autographed merch and finally meeting virtually for an interview, it’s safe to say that Bang Chan has moved up from fanboy to Ryan Reynolds’ “new favorite Australian.”

RELATED: Listing Our Favorite Moments From IZ*ONE’s One, The Story

Not going to lie, but Yunjin of K-pop group LE SSERAFIM might have just won the fangirl lottery—and rightfully so. Before vying for a spot in IZ*ONE through Produce 48, Yunjin was (and maybe, still is) a loyal member of the BTS ARMY. Fans brought out receipts of Yunjin’s old stan account with Tweets of her participating in fan events relating to BTS’ V. A few years, tears and a company switch later, Yunjin debuted in LE SSERAFIM under Source Music, a label under HYBE’s conglomerate. Just so you know, all entertainment companies under the umbrella stay in one behemoth of an office. So it might be likely that she and her lifetime bias have crossed paths in the hallways—the stan moment we can only dream of.

Even with a hit single and shared Grammy moment, Megan Thee Stallion still acts like a true member of the Beyhive. After all, she looked up to the icon for most of her younger years. Now that she’s friends with her idol, we won’t doubt the possibility that she’s still in disbelief. The rapper took to TikTok to show off her signed RENAISSANCE vinyl, complete with a personal message from Queen Bey. Of course, she kept some bits of the short message all to herself so that she could have her own special inside thing with Beyoncé.

RELATED: Take This Quiz To See Which “Renaissance” Song You Are

Are there any other stans-slash-celebrities worth highlighting? Let us know in the comments!