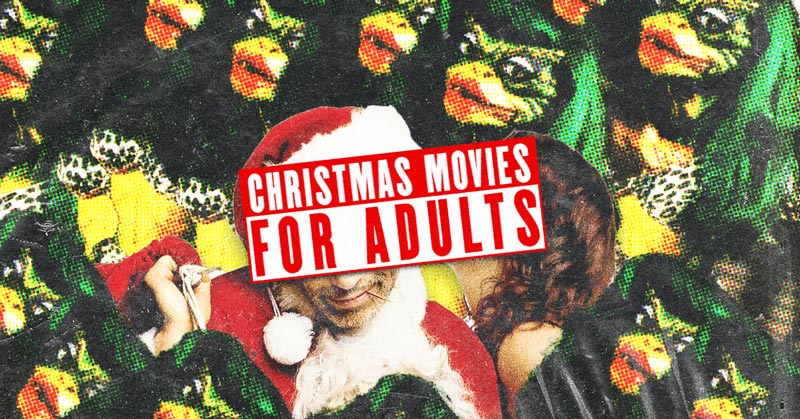 Christmas Movies For Adults, Because We’re All ~Grown~ Now

Christmas isn’t just considered the most wonderful time of the year, it’s also the most wholesome. But let’s face it, the endless carols on the radio and at the mall, the sappy kid-friendly, straight-to-streaming Christmas flicks and the general contrived merriment of the season can get a little tedious at times. So as a little respite from the ubiquitous glee, tune into these Christmas movies that are catered more to a mature audience—and no, we don’t mean pornography.

In this dark comedy, the misanthropic Willie T. Stokes (Billy Bob Thornton) and his partner (Tony Cox) get together annually for a holiday con. Dressed as a mall Santa and elf, they rip off shopping outlets on the night before Christmas. This year though, Willie is depressed and an alcoholic, and his aggressive behavior attracts the suspicion of mall security (Bernie Mac). Through the friendship of a small boy, however, Willie begins to display a kinder side.

RELATED: Reach or Real: Wednesday Theories That Might Be Answered in Season Two

In this cult classic, a gadget salesman looks for a special gift for his son and locates it in Chinatown. Although the shopkeeper is hesitant to sell him the “mogwai,” he does it anyway but warns him to never expose him to bright light, water or to feed him after midnight. All of the these occur and mayhem ensues in the form of a gang of rowdy gremlins that tear up the town on Christmas Eve.

When spoiled eight-year-old Kevin McCallister (Macaulay Culkin) gets confrontational the eve before a family trip to Paris, his mom (Catherine O’Hara) condemns him to sleep in the attic. After the McCallisters carelessly leave for the airport without Kevin, he wakes up to an empty house, assuming his holiday wish to have no family and be left alone has come true. His exhilaration dies down when he realizes that two thieves (Joe Pesci and Daniel Stern) intend to rob the McCallister residence, and that Kevin alone must protect his fortress.

The sequel of this holiday classic is more of the same, but in New York. And although these movies are kid-friendly and aren’t strictly for adults, the nonstop gags and witty dialogue is hilarious for everyone.

For the last decade, childhood pals Ethan (Joseph Gordon-Levitt), Isaac (Seth Rogen) and Chris (Anthony Mackie) get together on Christmas Eve to celebrate the holidays in true hedonistic fashion. But as Isaac prepares to become a first-time father, the friends realize that it may be time to grow up. Hence, to go out with a bang, they organize a night of debauchery and hilarity by searching for the Nutcracka Ball, also considered the Holy Grail of Christmas parties in New York.

New York City cop John McClane (Bruce Willis) is paying a visit to his divorced wife (Bonnie Bedelia) and two kids on Christmas Eve. He meets her at a holiday party in the headquarters of the Japanese-owned business she is employed with. Unfortunately for the reunited family, the festivities are halted by a gang of terrorists who take over the prestigious high-rise, and its occupants. Not long after, McClane comes to the realization that there’s no one to save the hostages—but him.

RELATED: No Longer The Grinch: These Christmas RomComs Never Get Old

The holidays are looming in. And while you don’t have to force yourself to join the cheesy romance or overtly joyous festivities, you can enjoy these Christmas movies that spin the holiday spirits into something a little more…relatable.