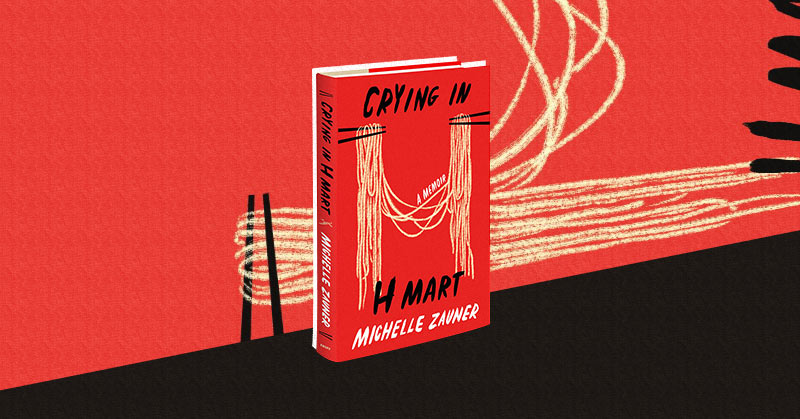 Crying in H Mart is a Litany of Beautiful Devastations, But Also So Much More

The debut book by Michelle Zauner, a.k.a. Japanese Breakfast, solidifies her place as one of the most eloquent voices of our time

The title track of Japanese Breakfast’s 2016 record Psychopomp functions as both the album’s interlude and psychic centerpiece. In the tail-end of the short track is Michelle Zauner’s mother Chongmi, in the middle of her battle with cancer, cooing “Gwaenchanh-a, gwaenchanh-a. (It’s alright, it’s alright.) It’s okay, sweetheart. Don’t cry, I love you.” Preceding these frail consolations are droplet synths that give way to reverbs that want to swell, but reel back, lest they drown out what could be last words.

This memory is revisited in Chapter 9, entitled Where Are We Going? from Zauner’s debut book Crying in H Mart: A Memoir. “Even as she was dying, my mother offered me solace, her instinct to nurture overwhelming any personal fear she might have felt but kept expertly hidden,” she writes. “She was the only person in the world who could tell me that things would all work out somehow. The eye of the storm, a calm witness to the wreckage spinning out into its end.” It’s a heart-wrenching passage, its sentiment articulated with the clarity of someone who has watched the storm pass but still stands in its cold air.

The eponymous essay and first chapter of Crying in H Mart was first published in The New Yorker in 2018 to the delight of Japanese Breakfast fans, who could proudly proclaim that their favorite dreampop act also happens to be a highly capable memoirist. At the time of its circulation it was celebrated as a vindication of the Asian-American experience, but it wouldn’t prepare future readers for the procellous accounts that would follow.

The book mainly revolves around Chongmi’s battle with cancer and Zauner’s reckoning of what all of it means. She measures the blast radius of her mother’s diagnosis by unpacking (the way impending death unravels all life lived thus far) different aspects of her identity—growing up with a mother who is kind in some ways and cruel in others, the white-hot angst of teenage rock ‘n’ roll dreams, her relationship with food. Like many great memoirs, it is thoughtful and psychologically acute, memories carefully collected and pieced together.

I want to pre-empt the reductive praise that some might heap upon Crying in H Mart by calling it a sad book, a sad story, as if sadness were the only emotional register that this book wields, as if mere agony were the goal. Crying in H Mart is a litany of devastations, but it is also more than that. It’s thoughtful and warm. Zauner wields a language register that is so precise and meticulous in self-examination that it can accommodate a hundred feelings in a single arc. Part of that also has to do with the way Zauner handles food in the book.

I believe that food writing is one of the hardest genres of writing to master. Anyone who’s ever attempted to write a restaurant review will vouch. There are only so many synonyms for “tasty,” and it takes a detail-oriented mind to nail the nuance behind every ingredient, unpack all the cultural and political baggage of food, and expound on dining experiences beyond the gustatory level. Michelle Zauner does all of that and more. It’s evident in her short-lived stint with Vice as the host of Close to Home, a series about fusion cuisine. But the way Zauner writes, it is almost like food itself is treated as a character.

One chapter of the book entitled Jatjuk acts in part as an ode to the namesake Korean dish, a soupy porridge made with pine nuts. Reeling from a sequence of large and small heartaches, Zauner revisits the dish through a recipe video by Maangchi, a YouTuber and cookbook author known for popularizing Korean cuisine for a global audience. It is a testimony that borders on the sacred, the way Zauner reckons with the significance of jatjuk as a staple in her mother’s diet while she was ill, a dish that softens her grief, and a recipe accessible to other Korean-Americans looking for solace.

There are so many passages in the book like this. Zauner has a way of illuminating how different dishes, ingredients and dining experiences situate themselves in mundane and critical life moments. As nourishment. As comfort. As invitations to a culture one might feel estranged from. As reifications of our ability to take care of ourselves and each other. Relating to Zauner’s specific subject position, we find that food is also entangled in her meditations on daughterhood. It’s in the complications of motherhood. It’s in the struggles of an up-and-coming musician, waiting for the big break that’ll make them “Jimmy Fallon big.”

RELATED: The Year of Reading: The Best Books of 2020

Crying in H Mart is a narrative of sustenance. There is a reason we joke about how parents offer food in lieu of apologies or how we message our crushes with “Kumain ka na ba? (Have you eaten?)” when pressed for greater confessions. Food acts as the locus around which different expressions of care coordinate themselves. Zauner recognizes this. What that sensitivity, generously gifts us is a multidimensional and thoughtful picture of her mother. It compels us to examine what family means to us. In this way, she tells a story of sickness, grief, and healing that no one else can tell.

So what we have is an artistic rarity, in more ways than one. Normally we encounter culinary writing, grief narratives and rock musician memoirs as separate works or genres. This book is a rare specimen of literature in which all three aesthetic currents converge. Crying in H Mart goes restaurant-hopping with Doreen Fernandez’s Tikim; it exchanges consolations with Joan Didion’s Year of Magical Thinking; it jams in the studio with Patti Smith’s Just Kids.

While reading the book, I found myself reexamining memories of when my father was afflicted with cancer. These are memories that would normally hurt too much to revisit, let alone articulate. They are all-consuming. I can only imagine the places Zauner had to go to capture the afflictions that people who haven’t lost a parent to terminal illness will ever understand, and the strength it takes to come out of those places still whole. I realize this book was a balm to me. It allowed me to sit with a grief that can never be fully processed, but can be more deeply understood. Sit down with this book, accept its invitation, find comfort. And after that, tell your mom you love her.