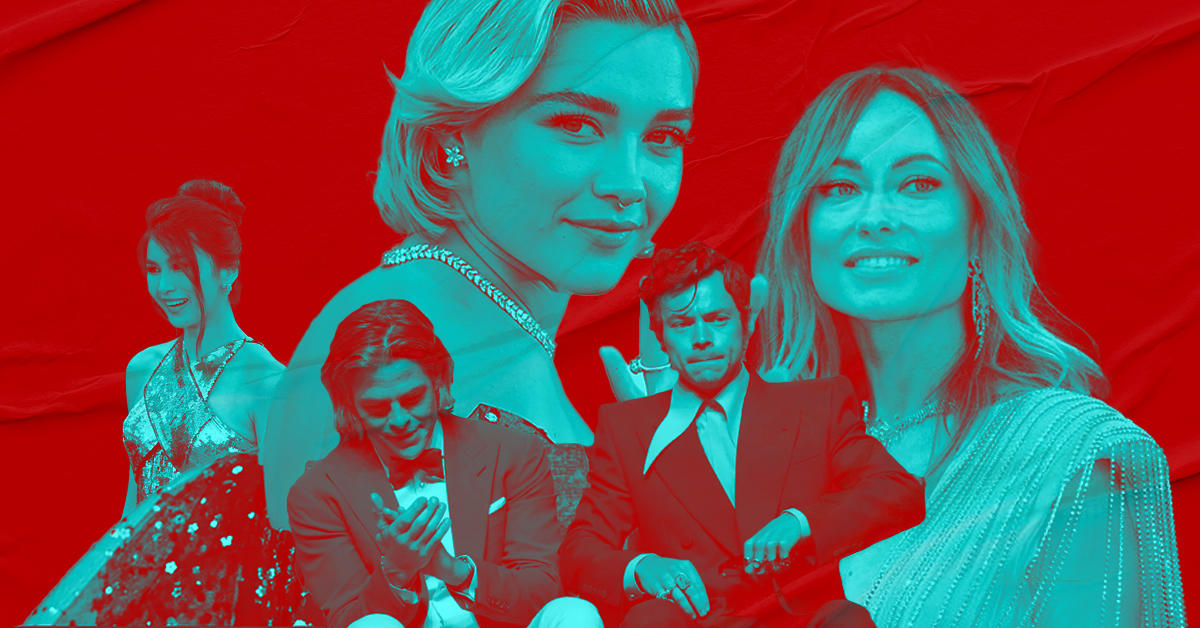 Why Are We Obsessed With Everything About ”Don’t Worry Darling”—Except the Movie?

We’ve got much to worry about, actually

After her directorial debut with Booksmart (2019), Olivia Wilde explores the realm of psychological thrillers with Don’t Worry Darling. With a star-studded cast, including Harry Styles, Florence Pugh, Chris Pine and Gemma Chan, Wilde’s second film became one of 2022’s highly-anticipated releases. Set in the 1950s, the film follows Alice (Pugh) and Jack Chambers (Styles) who move into Victory, California, a company town created and paid for by Jack’s mysterious employer. But the longer the two stay in the town with a picture-perfect lifestyle, Alice begins to question and investigate her utopian life.

In all honesty, the plot sounds interesting as it is. It’s giving a smidge of Get Out (2017), The Stepford Wives (2004) and Vivarium (2019). It’s also different from Booksmart, further pushing Wilde to tread different waters as a director. But, as the days to its premiere lessened, everyone suddenly became obsessed with Don’t Worry Darling for different reasons that don’t involve the film and its plot. Controversies stole the spotlight from the hype surrounding its premiere, with memes cannibalizing into new ones every hour.

Here’s the reason why we’re all so obsessed with everything Don’t Worry Darling—except the movie:

By now, everyone might be in the loop of the controversies surrounding Don’t Worry Darling. But for those who need a recap, everything traces back to the IRL plotholes from director Olivia Wilde. And with every headline, the plot thickens. Most of her statements surrounding the film get rebuffed, and one of the biggest ones is Florence Pugh’s differing opinion on the movie’s sex scenes. In a conversation with Vogue, Wilde shares her hopes that audiences “realize how rarely they see female hunger, and specifically this type of female pleasure.” But Pugh expresses otherwise. In an interview with Harper’s Bazaar, she explains, “That’s just not what I’m going to be discussing because [this movie is] bigger and better than that. And the people who made it are bigger and better than that.”

That’s just scratching the surface, because there’s also a lot more controversy surrounding Olivia Wilde. Her romance with Harry Styles caused conflict on set, especially with the allegations that the two got together before she and her ex Jason Sudeikis split. Florence Pugh supposedly didn’t take their relationship kindly, hence the fallout. The biggest evidence of the issue lies in Florence Pugh’s lack of promotion of the film on her socials (aside from a crew-centered Thank You post as they wrapped), especially when she’s known to put her projects on full blast on social media. This comes after her initial glee in writing about working with her idol in an Instagram post.

Meanwhile, conflicting statements from Wilde and Shia LaBeouf regarding the actor’s exit continue to bubble up, too. Wilde insists that she fired him based on her “no asshole” policy and his bad behavior on set, while LaBeouf insists that it was because he didn’t have enough time to rehearse. While the latter came in hot with receipts, it still feels weird seeing that they’re siding with him more. (It’s important to note that months after he was cast for Don’t Worry Darling, FKA twigs sued LaBeouf for sexual battery.) Is the gotcha! moment really worth it? While LaBeouf may have a right to clear his name, going against Wilde shouldn’t help him with that.

The memes (and repercussions)

The thing is, drama is drama. Gossip tabloids will continue to run headlines until mainstream media eventually wants in, too. But as far and wild as social media goes, TikTok was gifted a ton of material and ran with it. They call Chris Pine and Gemma Chan the best “human dividers” tasked to quell conflict between Styles, Pugh and Wilde at the Venice International Film Festival. Even the #Spitgate meme about Harry Styles spitting on Chris Pine became so widespread that the two had to address what actually happened. Sure it’s funny on the surface level, but we all know what happens when bubbles grow too big—they burst. And with the rate at how the internet continues to weigh in on this, we know that it just might.

Online sleuths continue to create series of videos connecting the dots. Sure, hypothesizing can be fun and entertaining but the drama has become its own monster. Reading between the lines can give us more insight into what had happened, but things remain under wraps for a reason. Sure, the noise surrounding Don’t Worry Darling might be cosmic karma for Olivia’s supposed wrongdoings as a director. But beyond all the tea and shade, we might be putting too much meaning into their movements. After all, we only know one side to the story—basing judgments over spliced clips, social media receipts and a couple of leaked conversations feels a little too reductive of a bigger picture.

RELATED: Living It! Stories: House of the Dragon Characters You Need to Know Before Binge-Watching

So while you eat up the latest #Spitgate meme or scroll endlessly through the #DontWorryDarling tag on TikTok, remember that we should take some TikTokers’ content with a grain of salt. We’ll still never fully know what goes on behind the scenes until Olivia Wilde and company choose to come forward. And even then, we still won’t know if what they say is true or not.

But hey, there’s no such thing as bad publicity. And even if the negative news surrounding this film outweighs the positives, the final product might just surprise us. So while we’re all 👀at the entire web of drama, we still can’t wait to see the movie that got everyone in a twist.