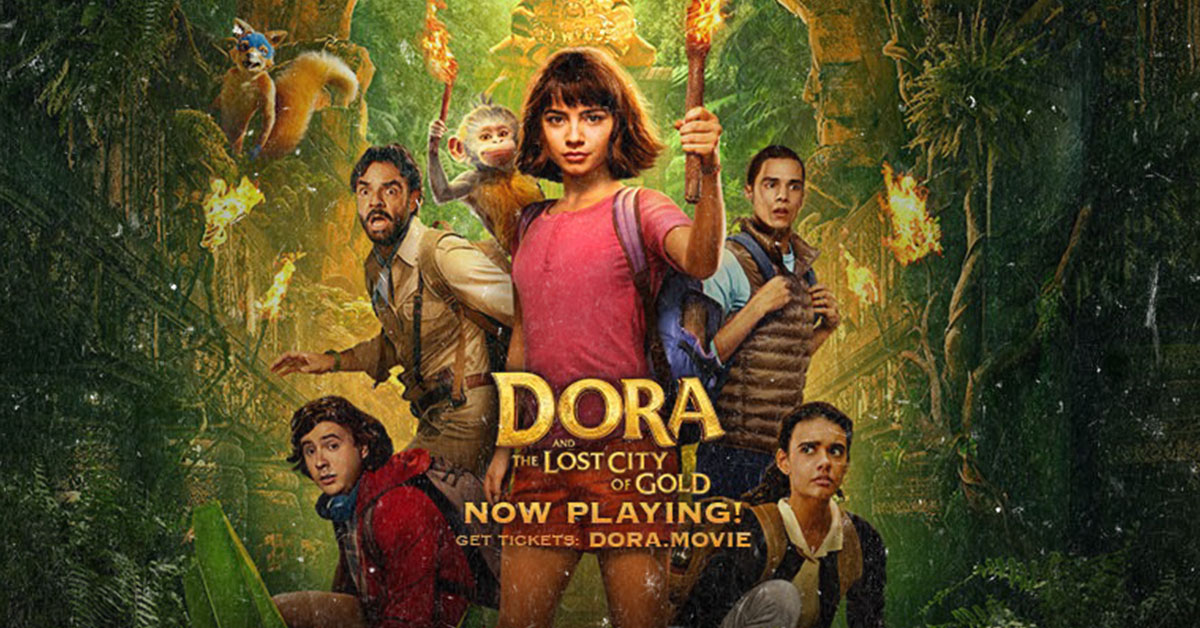 Do Not Dis Dora And The Lost City of Gold (Please)

Dora And The Lost City of Gold has an 80% rating on Rotten Tomatoes, fam

Look, when I was planning what movies to watch this month, I looked at Dora And The Lost City Of Gold and thought I’d catch it for a good laugh. I didn’t think it would be funny, exactly; I was expecting to poke a little fun at it and maybe make the movie ticket worth it.

But alas, friends, I am human and humans can be wrong. So without preempting anything, let me just say that I had a good time at that little theater screening. And I was watching alone—not that that’s important.

The film’s plot, like most Dora The Explorer stories, is pretty simple: Dora lives in the jungle with her parents her entire life, until they decide to send her to Hollywood so they can explore the location of an ancient city called Parapata (AKA The Lost City of Gold). Sixteen-year-old Dora’s adventure then becomes high school—until someone kidnaps her, her cousin Diego and two of their classmates during a class trip.

The mercenaries who capture the teenagers are after the gold that Parapata promises and they need Dora to help track down her parents (and a significant amount of wealth). Suddenly, Dora’s back home in the jungle and using all her know-how to keep everyone alive.

There are key things that make Dora And The Lost City Of Gold one of this month’s must-watch movies, of which the most important might be its brand of humor. The film is incredibly aware of its roots and where it comes from. At opportune moments, it throws back to the series enough to make that connection without being too overbearing that you cannot separate the live action from the cartoon. The songs, Dora’s overall demeanor and one memorable animated scene make for great laughs. Plus, Michael Peña and Eugenio Derbez—enough said.

Upbeat and incredibly “If you just believe in yourself, anything is possible,” Dora (Isabela Moner) is the positively perky teenager our cynical selves have learned to hate. Sure, if I met her in high school, I would have probably disliked her with a passion; but it works well for the film. Dora jumps off a cliff, careful maneuvers herself through possibly poisonous giant flowers and runs around with arrows flying at her head with no second thought. But amidst all this happy-go-lucky-ness, she teaches us that a positive attitude can only take you so far.

RELATED: Movie Dads We Wish Were Ours—And Why We Love Them

If you walk into the theater expecting an intelligent film, you will be sourly disappointed. It won’t take much thinking to figure out what’s around the corner in terms of the actual adventure. The plot is modest and the surprises are expected—but it’s this exact simplicity that gives Dora And The Lost City Of Gold the freedom to be something actually unexpected and in the best possible way.

Sure, you aren’t going to come out of the movie theater with some potentially life-saving skills, but you will feel a little bit better as you watch the credits roll.

Dora And The Lost City Of Gold is out in cinemas now. And if you need a good watch, a good laugh and just an overall good time, go watch it.