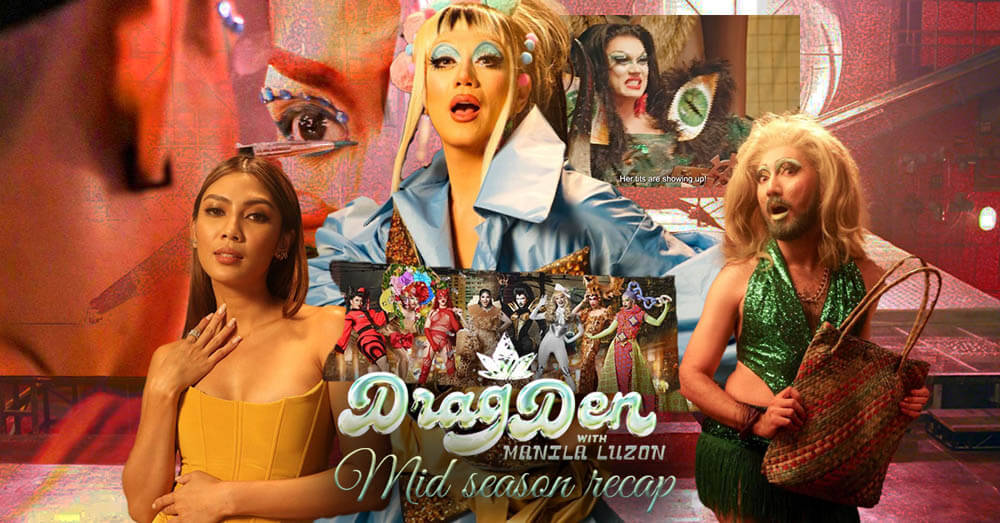 Dissecting “Drag Den:” The Road To Be The First-Ever Filipino Drag Supreme

You heard it right, Dragdagulan na!

2022 proved an excellent year for the Filipino Drag scene, with Drag Race Philippines’ iconic franchise further cementing the craft into what’s mainstream. On the other hand, Drag Den exists to bring us further into the local scene’s inner workings as a “drag pageant by Filipinos, for Filipinos.” We’re firm believers of “don’t knock it ‘til you try it,” but the internet couldn’t help but mull over the possible similarities with its direct competition. So as more trailers and episodes dropped featuring the show’s signature dark and gritty set, along with the unique sensibilities that make it inherently Drag Den, everyone knows that this show isn’t like the others.

First thing’s first: Drag Den Philippines was created by trans filmmaker Rod Singh, whose notable work is Mamu; And a Mother too. Fan Girl director and Project 8 Projects co-founder Antoinette Jadaone stands as the show’s producer. Facing the camera, we have the Drag Cartel. International Icon and Filipina Queen Manila Luzon stands as the show’s executive producer and Drag Lord. Beauty Queen, TV show host and “Certified Baklang Babae” Nicole Cordoves joins her as the Drag Dealer, while TikTok and internet sensation Sassa Gurl acts as Luzon’s loyal Drag Runner. A guest Drag Enforcer will guide and judge the queens and their presentations in each episode. From the stunning Miss Universe 2018, Catriona Gray, to the star that is Eula Valdez, the string of guests will keep you on your toes.

But beyond that, Drag Den has already set itself apart. We give you a lowdown on how.

In an interview with Rappler, Drag Den Philippines’ Rod Singh clarifies that she doesn’t want the show to be a copy of others. “We don’t want to be a copy of something because we can be original,” she shares. “Kasi meron naman tayong sariling culture, drag culture, queer culture, so might as well doon ako mag-focus (because we have our own culture, drag culture, queer culture, so I might as well focus on that).” Safe to say that in three episodes, the viewer will know exactly that.

From the get-go, Drag Den’s pageant-type format makes it a breath of fresh air. In each episode, Queens present two looks, one for the Themewear Drag Test and the Main Drag Showdown. The Main Drag Showdown can be a themed presentation or a unique one with a twist—a fitting avenue for the queens to show their stuff. Both presentations are graded as one. Of course, the themes draw upon things almost only Filipinos understand. Not to mention, the presentations always have the signature pageant-type greeting that shows off not only the look, but also each contestant’s wit and humor. And honestly? Their looks haven’t disappointed. Peep their “Manila By Night” looks:

When a Queen takes the top spot, they must go against a partner of their choice for a Dragdagulan Showdown. Then, all they need to do is dance, lip-sync and perform to the death (read: buwis-buhay) while needing to avoid a huge spiked wrecking ball. If the Top Queen emerges victorious, they win a competitive advantage; if they lose, this perk goes to their opponent. One of the most significant factors of Drag Den that makes it stand out is that no queen will go home after a loss—they just have to give it their all to make it to the Top Three, who will fight to become the first Drag Supreme. The moments in between challenges also make the show extra fun, even drawing inspo from meme Vice Ganda, whose May Nag-Text (Someone Texted) joke format made it to the show.

Eight strong queens, established and new to the scene, compete for the coveted title. We’re introduced to various personalities, histories and styles, all of which exist to push the boundaries and conventionalities of drag. You have Campy Chameleon O-A, Internet Icon (and seasoned impersonator) Lady Gagita, Our Blessed Lady of Manila Pura Luka Vega and Scream Chic Aries Night. Here to vie for the title are Sassy Youngster NAIA, Manila’s Bright Fireball Shewarma, Firey Trans Queen Barbie-Q and Bulacan’s Warrior Diva Maria Cristina.

But more than their exciting performances in the pageant, each runway look also comes with credits. From the designers, makeup artists and wigs, each queen wouldn’t be here without the help of their mean team. So be on the lookout for the amazing people behind the stellar looks. You might even spot some familiar names. (Shout out to Shewarma’s larger-than-life Higantes-inspired gown designed by Paolo Ballesteros.) Episode 4 will feature looks alluding to a “Filipino Fantasy” loosely inspired by Encantadia, and we can’t wait for the looks they have up their sleeves.

Sassa Gurl has said it, but let’s say it again for the people at the back: everything is political, including drag. Drag Den isn’t here just to highlight an art form often used to forward important issues to the LGBTQIA+ community. Everyone in it isn’t afraid to play with and fan the fire. From the effects of cancel culture, using one’s platform for good and realistic interpretations of horror icons to comedy’s misplaced position in politics, Drag Den doesn’t shy away from being blunt. While censors appear here and there, they still say it like it is and how it’s always been. Just take a look at one of Manila Luzon’s ending spiels:

Drag Den offers a bite when we all need it, especially in an era where we’re egged on to play it safe.

With the glamorous production, the behind-the-scenes shade and chatter, and the high-energy Dragdagulan Showdown commentated by Sassa Gurl, we can’t wait to see the Queens realize their potential. If pageants have shown us one thing, it’s the element of surprise. Whoever comes out at the bottom might just be a dark horse waiting to win—and we can’t wait to see who’ll take the title of the first Filipino Drag Supreme.

Drag Den episodes drop every Thursday at 7PM PHT. Catch up and stream the show on Prime Video. Support the Queens by tipping them or showing up to their free street viewing parties-slash-Dragdagulan Baranggayan Showdown. All deets appear on Drag Den Philippines’ socials.