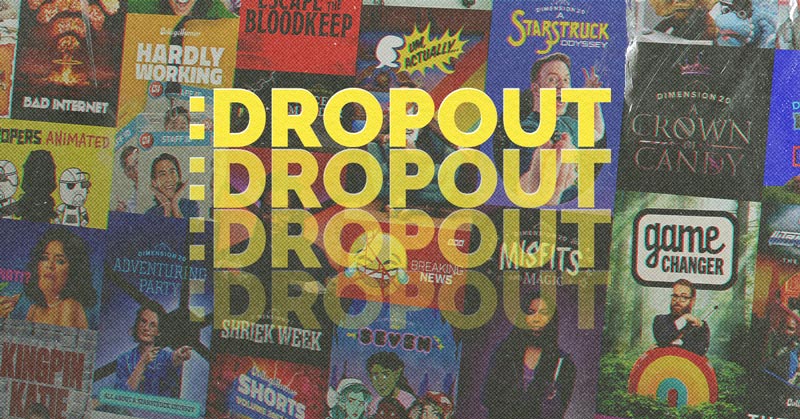 In a world full of streaming services that all feel the same, Dropout TV does it differently

Some long-story-short backstory is in order.

Most know CollegeHumor as a YouTube channel that produced and released comedy sketches. It began as a website founded in the year 2000 (predating Facebook!) and, because of that, was uniquely positioned in the online comedy ecosystem and came up in a very specific cultural milieu. Style-wise it was adjacent to Funny Or Die and saw about as much success as old Smosh. Though it initially appealed to a certain demographic of crass, collegiate beer keg bros, CH would go on to shed that branding while staying true to its love of sketches.

RELATED: Having People Read Thirst Tweets About Them Is Actually Weird

Years passed, the cultural landscape shifted, and in terms of business decisions, there was a lot of reaping and sowing. The conglomerate InterActiveCorp (IAC) bought CollegeHumor in 2006—the same year current CH and Dropout CEO Sam Reich was hired as director of original content—and funded its content creation efforts for a good while, before pulling funding from the humor company in 2020. This resulted in the mass layoff of hundreds of employees. CH wasn’t necessarily dead; it was sold to Sam Reich, and he had to think fast.

And then things changed. CH the YouTube channel still exists, but Reich and other surviving CH employees and committed company alums began focusing their energy on a streaming service called Dropout TV, where comedians and creatives could produce content without worrying about tetchy advertisers and the demands of stuffy conglomerates.

That’s the lore you need to know. It is important to frame this story as a story of reinvention. A scrappy startup, despite the capricious winds of change, wound up becoming one of the most innovative streaming services we’ve seen in the past few years.

For my money, I’d say the first big, big hit to come out of Dropout TV was something called Dimension 20, a Dungeons & Dragons actual play show where professional comedians (many of them recognizable CH favorites!) gather at a table to roleplay as fantasy heroes. The show was a resounding success, so big that the show’s game master, Brennane Lee Mulligan, would eventually guest star on various episodes of Critical Role, known by many as the premier D&D actual play show.

That was back in 2020. Other shows such as Breaking News, a series where comedians read from a teleprompter like news anchors while trying not to laugh, have led users to the service through videos on YouTube that potential subscribers still on the fence could watch for free. And while the streaming service has been enjoying moderate success and growth due to user subscriptions, I believe Dropout TV really found its footing this year.

Since its inception, Dimension 20 has released a bunch of seasons that reimagine the tabletop roleplaying medium through different genre conventions. Um Actually, a game show for pedantic geeks that could comfortably target CH’s old audience, has adopted a kind of polish and sheen akin to the likes of Jeopardy or Wheel of Fortune. Game Changer, the game show where the rules change every episode, has recently spun off into Make Some Noise, an improvisational comedy show that basically carries the torch of Whose Line Is It Anyway?

When the CH channel released its trailer promoting Dropout TV back in 2018, I was extremely skeptical. It posed a big ask for its audience to subscribe to a service that would put new content behind a paywall. Dropout even self-deprecatingly pitched itself as “It’s like Netflix, but worse! And cheaper!”

So, looking back, it’s been funny to observe how much more expensive Netflix has gotten while waning in quality, all while Dropout TV has been making interesting moves. Discord servers dedicated to various shows have functioned as a way for the company to interface more closely with its community of fans. Brian David Gilbert’s slowly turning into a Dropout regular! Brian David Gilbert!

How does one explain Dropout TV’s success and the quality of its content? I believe it has to do with the company’s accumulated experience of being on the internet for the past two decades, as well as its commitment to making sure original content triumphs. These two factors, I believe, result to a business philosophy that prizes slow and steady growth over relentless expansion.

RELATED: Otakus Rejoice: Crunchyroll is Now Available In The Philippines!

Dropout is currently releasing new episodes of Make Some Noise per week, and has just begun airing A Court of Fey and Flowers, a D&D actual play show GM’d by Aabria Iyengar inspired by Pride & Prejudice and other pieces of regency era media. If you want a streaming service where creatives are paid fairly and get to make the things they want to make on their own terms, well… you’re not going to find it in Disney Plus. Dropout is the place.