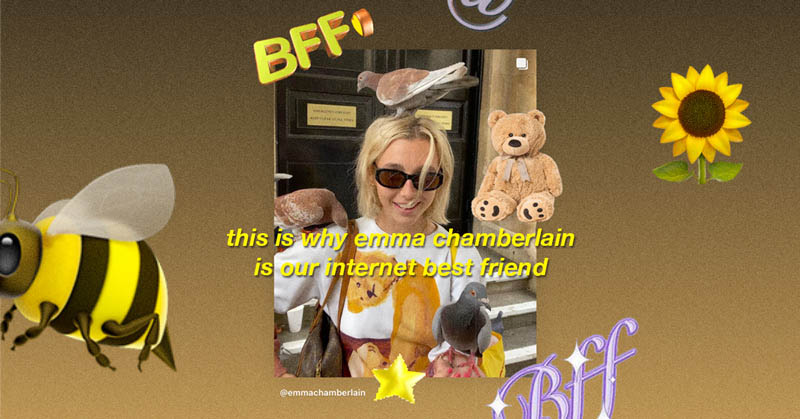 This is why Emma Chamberlain is our internet best friend

Picture this: it’s five years ago, and you’re back to being a teenager. You realize again that 2017 was the year of the Internet—you post your OOTDs on Instagram, send streaks to your friends on SnapChat and hear Despacito playing everywhere. YouTube is becoming a hub for upcoming video bloggers who know exactly what we want to see. This time, however, you question how genuine everyone’s online content actually is.

Well, that’s where a chic and oddly-humored California girl comes in. The now 21-year-old Emma Chamberlain has defined what it means to be authentic and Gen Z-relatable online—which is oftentimes the best answer when someone asks what she’s famous for, because it just makes sense. Emma is the Internet’s bestie that takes you across Europe and the United States, and also lets you in on the biggest events she attends.

RELATED: What Went Down At Wonder At The Fore

Having discovered her in July, my tiresome month definitely had that Emma-twist to it. If you want to know what I’m talking about, here’s a list of the first few Chamberlain videos that took me places, where I heard the most unexpected monologues:

We all know that the Met Gala is more than an annual fundraising event of Hollywood’s A-listers—it’s an instant pop culture reference every year. You’d expect its behind-the-scenes vibe to be uptight, yet here comes Emma disclosing the struggle of taking a wee with her new nails a night before her first Met. She even trades her heels for slides in between hosting interviews for Vogue.

A special mention to her iconic Vogue interview with Jack Harlow during her second year! How could we forget their first viral interaction?

Despite the many reasons to visit the prime shopping district of New York, it only takes a pair of “I ❤️ NY” pajamas for Emma to stay a little longer before heading back home to Los Angeles. We join her on a day of visiting gift shops and clothing stores—and more devotion to the pajama pants, of course.

3. Fashion week with my dad

Apparently, Paris Fashion Week is perfect for a father-daughter trip. The Louis Vuitton ambassador tags her dad along to watch the French fashion house’s event unfold, which she says made her dad cooler. The pre-show consisted of two omelets and a hotel-room interview, featuring an LV sandal as the mic. (Also, can we talk about how Emma paused mid-monologue when golden hour hit? Same, girl.)

4. The south of France

It’s the fake-crying-over-a-mini-fan for me. Emma strolls around the south of France, only to look around for a cat and dream of one day being an old lady with a pet pigeon in the local farmers’ market. Amid the beach content that we can see about the south of France, this one stands out because it’s all street stalls and—you guessed it!—pigeons.

The bottom line about Amsterdam is: a café is for when you need a dose of coffee, but a coffee shop is for when you want a dose of…something else (read: weed). The coffee lover that she is, Emma Chamberlain takes us to several cafes complemented with a review of different kinds of cheese in between. There might have been an issue with her excess baggage, but there’s no stopping this girl from thrift shopping and looking for a fun pair of socks.

RELATED: All The Ways Catherine Middleton Has Been Keeping The Memory of Princess Diana Alive

I’m telling you, Emma Chamberlain is the awakening of your Gen Z energy. Love ya, bye!