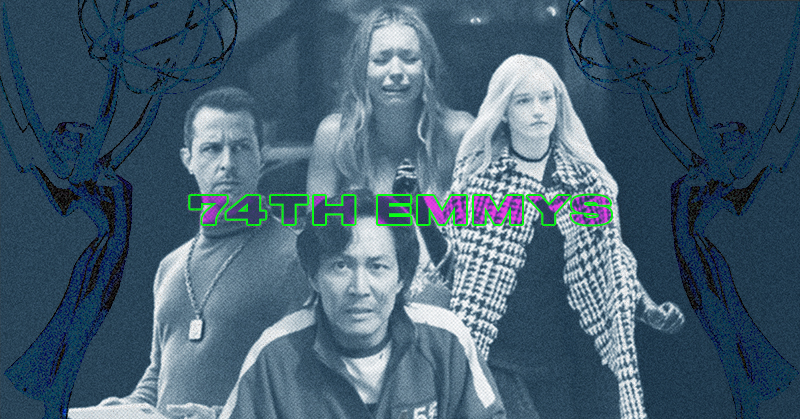 A Low Down on the 2022 Emmys: All the Numbers, Feels and Questions

We have a couple of feelings on the 74th Emmy nominations

After a jam-packed year of new episodes, some new titles we took chances on and hours spent binge-watching on our screens comes another nomination szn. As July rolls in, the Television Academy gears up to announce its bets for the Primetime Emmy Awards. HBO’s Succession takes the title of “Most Nominations,” receiving 25 nods from the Academy. These include major awards, one of which is Best Drama Series. Meanwhile, Ted Lasso and The White Lotus tie in second with 20 nominations each. But surprisingly (or unsurprisingly), pop culture behemoths such as Euphoria and Stranger Things only round up 16 and 13 nominations, respectively.

But of course, much like any other award show, the general public—who mostly enjoyed these titles—has a lot to say. So allow us to unpack the Emmy nominations for 2022 because we, too, have feelings and questions.

RELATED: We’ve Got Some Feelings About This Year’s Oscars Nominees

What’s an Emmy nomination announcement without a couple of snubs? Every year we get disappointed that our top bets don’t even get a nod. But for 2022, a lot of us are heated. One surprising snub goes to Selena Gomez’s role in Only Murders in the Building. The Hulu series, where she stars alongside Steve Martin and Martin Short (who got nominations), received incredible reception since its premiere. Many continue to rally behind the actress because the show’s heart wouldn’t shine through without her participation.

Next, Sadie Sink and Millie Bobby Brown deserve Emmy nominations this 2022 for their performances in Stranger Things 4. Truthfully and objectively speaking, they both delivered the best scenes during the season’s first volume. The standout episode for Brown in volume one is The Massacre at Hawkins Lab, while Sink undoubtedly shines in Dear Billy. Coincidentally, these two episodes earned the series at least eight of their nominations. A silver lining, though—volume two qualifies for next year’s Emmys. So an Emmy Award might soon be within reach for Millie Bobby Brown, Sadie Sink and even Caleb McLaughlin.

Other snubs worth mentioning go to The Morning Show, where Jennifer Aniston’s Alex Levy and Steve Carell’s Mitch Kessler continuously deliver emotionally-charged sequences—worthy of Best Actress and Actor in a Drama Series noms. The Morning Show tackles different issues: sexual harassment in the workplace, power struggles, cultural appropriation and cancel culture. Aniston and Carell carry the burdens of their characters like they’re their own. The season even closes with Aniston’s Levy reporting-from-home with an incurable case of COVID, leading her to end with a powerful monologue. The scene alone needs an award to go with it.

Surprise, surprise, it’s a good day for a couple of shows

On the brighter side, a couple of actors finally get what they’re due. Despite the Maddy vs. Cassie Smackdown winning over Shang-Chi at the MTV Movie & TV Awards, we all know Sydney Sweeney’s prowess is destined for more. We have never, ever been happier for her this year. The actress received back-to-back nominations for her roles with HBO: Euphoria (Best Supporting Actress in a Drama Series) and The White Lotus (Best Supporting Actress in a Limited Series). The same goes for Abbott Elementary, led by former Buzz Feed creator Quinta Brunson. Her creation catches seven nominations, two of which count for major awards: Best Comedy Series and Best Lead Actress in a Comedy Series (Quinta Brunson). All we can say is: well deserved.

After the rollercoaster shitshow of Inventing Anna, the limited series gained three nominations, including Best Limited Series, Best Lead Actress in a Limited Series (Julia Garner) and Outstanding Casting. While I applaud Garner’s ability to transform into the Scamderella that is Anna Delvey, I don’t understand what part of the series makes it count as one of the best. Dragging, wild and a bad attempt at humanizing a criminal, Shondaland covered the holes it had with extreme extravagance. Maybe budget makes a Best Limited Series?

The moment you’ve been waiting for: our bets

While we could keep talking (read; moping) about who deserves the shiny trophy and who doesn’t, the Emmy nominees are already out and set in stone. So let’s take a look at those we hope to win:

Other nominees: Abbott Elementary, Barry, Curb Your Enthusiasm, Hacks, The Marvelous Mrs. Maisel, Only Murders in the Building, What We Do in the Shadows

Other nominees: Dopesick, The Dropout, Inventing Anna, Pam and Tommy

Best Lead Actor in a Limited Series or Movie: Andrew Garfield (Under the Banner of Heaven)

The 74th Primetime Emmy Awards happens on September 13, 2022. But, Emmy or no Emmy, there’s one thing we can all agree with: thank god for these TV shows. After all, what else can we look forward to after a long day, week or month? These titles keep us sane in more ways than one, which make them deserving of all sorts of love and celebrations anyway.