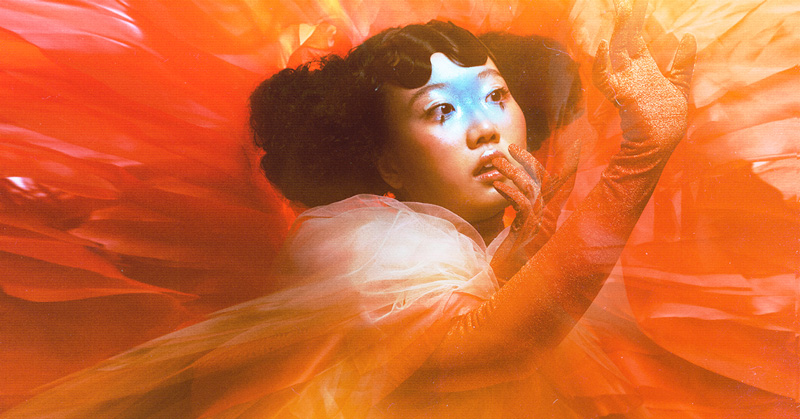 ena mori Welcomes Us to Her Vivid World With “Don’t Blame the Wild One!”

Listening to ena mori is always a trip. One can never expect where her carefully crafted pop bops will bring you, but listeners often end up in a better place. It’s as if she made her music to take you along such an experience before fully letting go. Whether it’s the contagious energy of FALL IN LOVE! or the ringing battlecry of OH! BLEEDING HEARTS, ena mori has an exceptional talent that lets you hear the colors and feel the intention through her music. So all-consuming that at the end of each track, you find yourself pressing replay once more. Her songs command you to turn the volume up and listen with full attention. And honestly, that’s the least you could do when ena mori comes on.

This expands in her debut record, DON’T BLAME THE WILD ONE!. Clocking in 12 vastly different tracks, all brimming with her pop prowess and sensibilities, ena mori successfully takes us through a wide range of emotions. Sometimes sour, some sweet, others filled with hope and shining with optimism, DON’T BLAME THE WILD ONE! will at least have one track that will speak to your soul. The album provides a peek into her vibrant world, starting with different music videos that all weave into one another. Coupled with her bright imagination and self-expression that’s almost reminiscent of Björk, we can tell that we still have a lot of layers to her that we ought to peel back. Yet, with each layer, you find yourself relating to her, too—in love, insecurities, mutual aid and looking up to the youth.

In an exclusive interview with Wonder, she shares, “I think that Don’t Blame The Wild One! is an extreme way to express my deep thoughts that I don’t usually get to express. I am not very outspoken.” So she uses her music as an opportunity to do so, further shaping its theme along the way. “I think that the overall theme of this album is to be bold about our emotions. To be unapologetic about being,” she adds. And that’s the message she delivers throughout.

RELATED: A Bright-sided Conversation with Dagny About Pop Songcraft

Up ahead, we catch up with the revolutionary Japanese-Filipino pop star on her debut record, the Ena Mori Cinematic Universe (EMCU) and more.

Wonder: The gap between your eponymous EP, ena mori, and Don’t Blame The Wild One! is over two years. Not to mention, you worked on it during the pandemic. So how does this album stand out from the rest of your discography?

ena mori: I consider my previous EP a medium to figure myself out as an artist. I guess the difference between this album is that I am so much more confident with my decisions creatively, and I took more risks to make this record authentic to me.

W: Before we dive into the nitty-gritty of the album, we can’t help but notice that the visuals for Don’t Blame The Wild One are colorfully vivid with a tinge of haze. So how does it tie with the overall theme of the album?

EM: I am a very color-driven person—it’s weird to say it on my own! What I mean by it is that I tend to surround myself with a colorful environment whenever I don’t feel like myself. So this album has to be an extension of my mind. I think, naturally, it reflects [in] the album’s overall theme.

W: Speaking of visuals, starting from OH, BLEEDING HEARTS down to SOS, all your music videos happen in one universe. What made you want to explore the concept of related music videos or what we’d call it: the EMCU (the Ena Mori Cinematic Universe)?

EM: EMCU, I love it! The whole one-room concept started when we realized that our circumstances weren’t suitable for filming a music video in a studio. Then, due to the pandemic, most studios closed, which sparked an idea to do three music videos in one room. I think it’s interesting how the color design of the room changed each song’s story.

W: TALK! TALK! is a multi-layered masterpiece, with touches of hyperpop through its different sounds and genres cutting through the track. Can you walk us through the process of creating this song?

EM: TALK! TALK! is one of the oldest songs I wrote on the album. I wanted to write a song without thinking too much about its structure. The isolation and having more time to spend with myself really inspired me to write this song. I had fun making this record.

W: This July, Wonder continues to highlight the kids these days. It’s timely because, in SOS, you ended the song by chanting “Youth make our beautiful future” in English, Filipino and Japanese. From your perspective, how does the youth play into shaping our future?

EM: I think it is important to always look after the younger generation and encourage them to live life to the fullest.

W: What do you hope people will take away from Don’t Blame The Wild One!?

EM: I had several albums I listened to religiously when I had a hard time during my teen years. I hope this record will give someone the confidence I didn’t have when I was a kid, and I hope it will be something that people can hold on to.

W: Where do you see ena mori five years from now? What’s she doing, how is she?

EM: I have no idea! I hope I am still making music that I can be proud of!

From her heart to yours, ena mori encourages us to take our weaknesses and turn them into masterpieces with DON’T BLAME THE WILD ONE!. A bad thing doesn’t have to remain as such; it has the potential to become something better. So don’t be afraid to FALL INLOVE! or scream SOS.