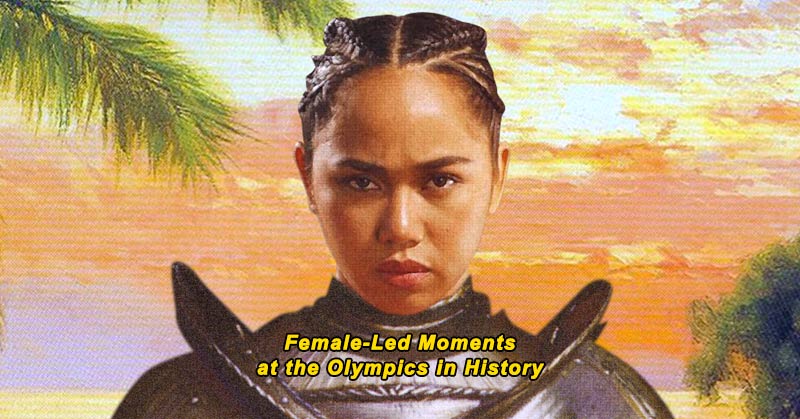 Women Can: Female-Led Moments at the Olympics in History

These women have made and are making “herstory”

The first modern Olympic Games, the 1896 Summer Olympics held in Athens, was a celebration of virility, was a “solemn and periodic exaltation of male athleticism.” It was only in the 1900 Summer Olympics in Paris when 22 women, out of a total 997 athletes, were admitted to compete in five sports: tennis, sailing, croquet, equestrianism and golf. The sailor representing Switzerland, Hélène de Pourtalès, became the first woman to win an Olympic gold medal. Still, these sports were limited and considered to be “compatible with [female] femininity and fragility.”

The underrepresentation of women and the gender imbalance at the Olympics caused female allies to protest the restrictive Olympic regulations keeping women from competing in almost all games. In 1921, a worldwide movement of women joined forces to establish a separate event for women athletes, the Women’s Olympics. A total of four Women’s Games were staged across Paris (1922), Sweden (1926), Prague (1930) and London (1934).

Through the years, the International Olympic Committee progressed, albeit very slowly, and included more women in their roster of competitors amid the continuous discrimination women face in the field. It was only recently, in 2007, when the Olympic charter made the presence of females mandatory in every sport. They are paving way for a more “sustainable, gender-equal and inclusive Olympic movement.”

Women have contributed to the world of sports since time immemorial. Here are other female-led moments at the Olympics in history.

At the Berlin 1936 Games, USA’s Marjorie Gestring, a 13-year-old swimmer, became the youngest Olympic gold medal winner with her win in the springboard diving event. Unfortunately, World War II robbed her of her shots at the 1940 and 1944 Olympic titles, both events which were canceled. At age 26, she had her Olympic comeback.

Historically, Black women athletes faced double the discrimination because of their gender and race. At the 1932 Summer Olympics in Los Angeles, Louise Stokes and Tidye Pickett qualified in track and field, but they were not allowed to participate because of their race. In 1936 in Berlin, they became the first African American female athletes to represent their country in the Olympics. Meanwhile, Alice Coachman, a star track and field athlete, became the first woman of color to win an Olympic gold medal.

Most Gold Medals Won by A Female in A Single Olympics

At the 1988 Seoul Olympics, German swimmer Kristin Otto won six gold medals. She won gold medals in three different strokes: freestyle, backstroke and butterfly. Her overall performance at the 1988 Games even ranks as one of history’s greatest sporting achievements. She later garnered the title “Queen of Seoul.”

The Most Decorated Female Olympian in History

For 48 years, gymnast Larisa Latynina held the record for winning more Olympic medals (a total of 18) than any other female and male Olympian in history. At the 1958 World Championships, she competed even while four months pregnant, and still won five gold medals. In 1998, she was inducted into the International Gymnastics Hall of Fame.

The First Olympic Gold Medal for the Philippines

Her road to the Tokyo Olympics wasn’t a smooth one; becoming an Olympic champion seemed only a distant dream. She started lifting weights made from plastic pipes and homemade concrete weights. The Filipina athlete persevered as she believed sports was the path to take to have a better life for her family.

The Tokyo 2020 Olympics isn’t short of brilliant Filipina athletes. Nesthy Petecio bagged silver at the Women’s Featherweight Final match, making her the first Filipina boxer to win an Olympic medal. She ends the 25-year drought of wins at Olympic boxing for the country. Meanwhile, Cebuana skateboarder Margielyn Didal also entered the Women’s Street Final in Olympic skateboarding, landing a seventh-place finish. This was her debut at the Olympic Games. This will be the first time in 89 years that the Philippines will win multiple medals in an Olympics edition since the 1932 Los Angeles Games.

Despite the Olympic Games starting out as an event reserved for male athletes, women have and will continue to make history in this field.