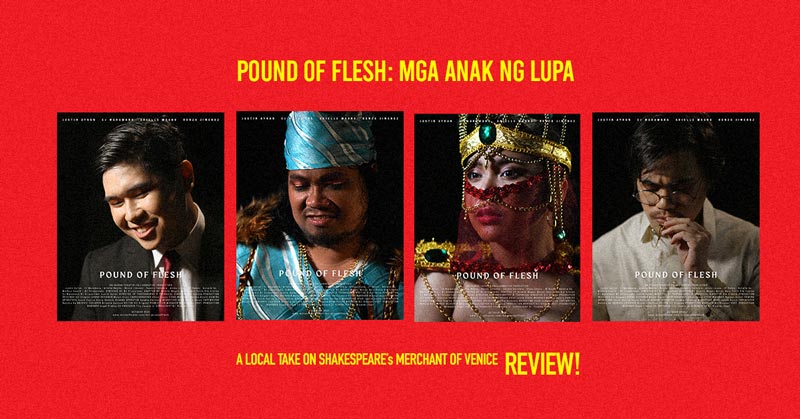 Directed by BJ Crisostomo, “Pound of Flesh” reimagines the “Merchant of Venice” in the Philippine setting

I was a freshman in high school when my class tackled Shakespeare’s Merchant Of Venice. We were required to memorize—and perform—Shylock’s soliloquy that year. You know the one: “To bait fish withal: if it will feed nothing else, it will feed my revenge.” Fortunately, I was my sister’s sound board when she had to memorize the speech eight years earlier. It made things easier for me, and to this day, I can run through that monologue.

Needless to say, I am a traditionalist when it comes to the bard’s work. And when we got an invite to view Pound of Flesh: Mga Anak ng Lupa, I was doubtful of it. A local take on Merchant Of Venice? Mixing Tagalog and English in the hope of hitting the same notes, the same impact, speaking in the same flow? It didn’t sound possible.

But I was pleasantly surprised.

RELATED: Did Anyone Else Have An Issue With Ang Huling El Bimbo (Now That We’ve All Streamed It)?

The narrative is essentially unchanged: there is love, there is money and there is a thirst for revenge. We meet the characters, learn their jobs and slowly understand how they fit into the bigger picture. Our job, as the audience, is to then determine who is in the right. Who is actually being cheated? Who deserves justice? Where should the line be drawn?

But beyond the inspiration, Pound Of Flesh: Mga Anak Ng Lupa shines in its colorful use of languages. Seriously, kudos to the humans behind this manuscript. The Elizabethan English that we struggled to understand and grasp is somehow made easier to comprehend with a sprinkling of Tagalog. It’s so strategic and unexpectedly free flowing that you barely even realize they’re switching between the two. And the speech is properly supplemented by use of a modern Filipino setting. Merchant of Venice might have been a story of power struggle, money and social status, but Pound of Flesh plays on the tension between indigenous and urban Filipinos, between the underdog and the corporate powers that be—and in today’s tense society? *chef’s kiss*

RELATED: REP’s The Dresser Is (A Little Too) Intelligent

During the play’s Q&A, I was surprised to hear some teachers speak up. They asked questions about availability, screenings, prices—and I realized that Pound of Flesh is something I would have loved to see when I was in high school. It would have given me an entirely new perspective; you can only stretch your imagination so far, especially when the characters start to sound like spoiled rich kids. But when it hits home, when it touches on news and politics that you have heard of in your lifetime, the narrative and the themes it explores become much more than even the best English teachers can explain.

It had been a long while since I last had the opportunity to appreciate a good theater production. And while I couldn’t enjoy Pound Of Flesh: Mga Anak Ng Lupa in its intended form, it was a great way to re-enter the world of Philippine Theater.