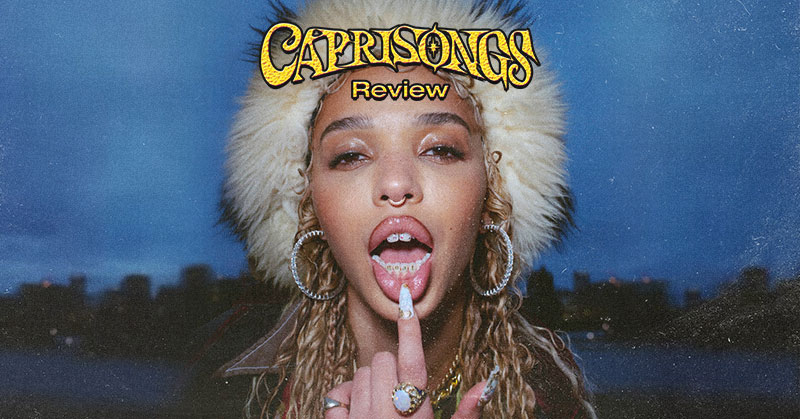 FKA twigs Bares It All in CAPRISONGS

FKA Twigs release miles away from “MAGDALENE,” but still entirely hers

FKA twigs have always been seen as an artist beyond reach, a human being with a presence so surreal she seems otherworldly. The perfect embodiment of Divine Feminine Energy due to her soft, choral-like vocals and graceful movements. But despite her music and impeccable talent to capture longing and love (see: Two Weeks from LP1), the British artist often projects her stories from the image of another.

Even if MAGDALENE explored the cracks and fall of a relationship beloved in a step towards vulnerability, twigs held the darkness in a separate reality she ran to. All the while, she kept other parts of herself hidden behind a veil. But with CAPRISONGS, twigs bares it all, from the lows of worries to lamentations of her highs. She taps genres she’s known for and styles she’s been waiting to try. As a result, this mixtape shows new facets to Tahliah Barnett that we’re allowed to see for the first time.

RELATED: No Rome Grins Through It All in His Debut Album It’s All Smiles

She shares in an Instagram post, “CAPRISONGS is my journey back to myself through my amazing collaborators and friends.” She previously believed that she’d reached the end of creating music, but with the help of a close support system, twigs fell back in love with music and her craft, and with the pleasures of life. twigs was able to find her healing by creating CAPRISONGS without any goal to please the world.

CAPRISONGS gives 17 tracks one can either play on the dancefloor or blast in their room while crying. It shows off twigs’ widest range in genre-bending. Vulnerable tracks like lightbeamers and thank you song lean heavily toward her eclectic ballads plucked from a different astral plane. But twigs also brings forth a heady mix of hip-hop, R&B and dancehall-led dance anthems you’d sweat to on the dancefloor, such as honda featuring pa salieu and jealousy with Rema. All these genres meet in the middle with tears in the club featuring The Weeknd and oh my love. However, the major standout in the album is papi bones with Shygirl, a sensual piece of music that offers a new way to hear and appreciate FKA twigs’ tinkling falsetto.

RELATED: The 2022 Grammys Are Officially Postponed

FKA twigs draws perspectives, motivation and inspiration—like many of us—from the deepest crevices of our beings. In this mixtape, FKA twigs explores her natal chart or the multiple astrological placements that contribute to her being. twigs opens with a soft declaration of her chart in meta angel, “Sagi moon, Piscy veen (venus), Capri sun!” CAPRISONGS embodies all her personalities, a tale in three placements: a bold but mysterious siren, a soft and fuzzy romantic and a hardworking creator meet to create a unique FKA twigs.

But another integral part of her being is her support system, whose guidance helped her out in this trip. meta angel further explores this through angelic vocals being the backdrop of an intimate conversation between friends. The song’s spoken introduction is just one of many personal interactions littered through the album. With these recorded anecdotes and stories, she assures listeners who need them most.

Bare, raw, and dripping with honesty, CAPRISONGS could probably be FKA twigs’ most vulnerable body of work yet. It’s like seeing a GOAT simultaneously lay down their load and carry ours. In an Instagram post, she writes, “If you are lonely or feel isolated by your immediate circle, you can borrow my friends on the mixtape.”

The journey to healing was to create this body of work. Part of it is providing comfort to someone in the same pit she emerged from.