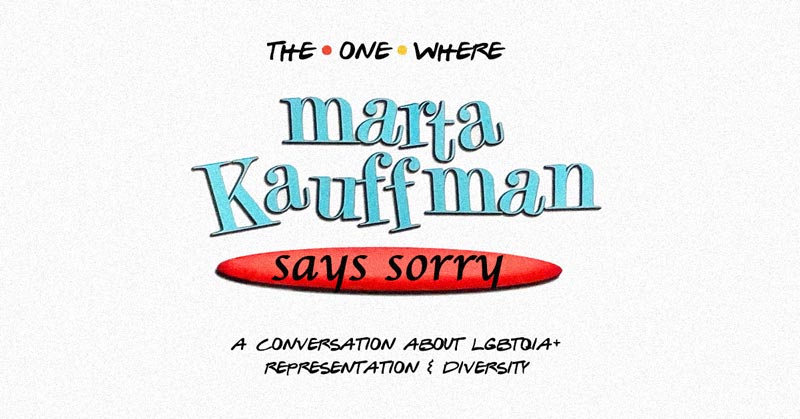 The One Where They Apologize: Let’s Talk About “FRIENDS”

Could FRIENDS *get* any more problematic?

The portrayal of members of the LGBTQIA+ community in the media has progressed over the years, with hit TV series like Heartstopper, Pose, Sex Education and Euphoria dominating streaming platforms. Recently, Stranger Things star Noah Schnapp made headlines by confirming that his character Will Byers—seen evidently pining for his best friend Mike Wheeler in the latest season—is gay.

Queer representation may have evolved, but there’s no mistaking that in the ‘90s, shows were hugely transphobic and queer people were, unfortunately, made a punchline—or a transsexual serial killer, as we saw in Silence of the Lambs’ Buffalo Bill (but that’s for another story). The iconic American sitcom FRIENDS, starring A-list celebrities Jennifer Aniston, Courtney Cox, Lisa Kudrow, Matthew Perry, Matt LeBlanc and David Schwimmer, is no exception.

RELATED: An Ode To the Channels That Speak Pride After Pride

In a recent interview, FRIENDS’ co-creator Marta Kauffman apologized for misgendering Chandler’s transgender parent, Helena Handbasket, who has been the target of transphobic jokes during the show’s run. Throughout the show, Chandler has actively avoided a relationship with her, mortified by the reality that his parent is queer.

In an interview with The Conversation, Kauffman reveals, “We kept referring to [Helena] as Chandler’s father, even though Chandler’s father was trans.” She adds, “Pronouns were not yet something that I understood, so we didn’t refer to that character as she. That was a mistake.”

Played by straight actor Kathleen Turner, she’s been quoted saying if given another chance, she would turn down the role. In an exclusive interview with GAY TIMES in 2018, she notes, “I don’t think [the show] aged well.”

The Oscar-nominated actor adds, “It was a 30-minute sitcom. It became a phenomenon, but no one ever took it seriously as a social comment…Every time I watch an episode, there’s something I wish I could have changed.”

To add insult to injury, in an episode entitled The One with the Rumor, Ross and his friend Will Colbert, played by Brad Pitt, reveal that they spread a lie about Rachel in high school that she’s a “hermaphrodite.” If given a do-over, Kauffman would not have included that ignorant and unprofessional joke today.

RELATED: The Easter Eggs and What-Could-Have-Beens From The Friends Reunion

Kauffman, also the creator of the Netflix hit series Grace and Frankie, has also taken accountability for FRIENDS’ glaring lack of diversity, which has paved the way for her to “strive to create inclusive and diverse workplaces.” Throughout the iconic TV show’s run, there were only two Black cast members with speaking lines: Aisha Taylor and Gabrielle Union.

In an exclusive interview with InStyle, Taylor, who played the first Black woman cast in a recurring role on FRIENDS, reveals, “There [wasn’t dialogue] about the fact that it was an interracial relationship. There was no commentary on the show about my character being Black, and I think they had just written this character as this kind of love triangle between Ross and Joey. They happened to hire a Black woman, which—I don’t know that I’m advocating for colorblind casting any more than I’m advocating for people doing a better job at making shows diverse.”

Many fans—and critics—have since then reimagined an all-Black cast for the show.

During the aftermath of George Floyd’s murder in 2020, Kauffman finally accepted the biggest criticism of the show—their failure to be more inclusive. In an interview, she divulges, “I’ve learned a lot in the last 20 years…Admitting and accepting guilt is not easy. It’s painful looking at yourself in the mirror. I’m embarrassed that I didn’t know better 25 years ago.”

She has since then pledged $4 million to her alma mater, Brandeis University, to establish an endowed professorship in the school’s African and African American studies department.

RELATED: 5 Times FRIENDS Made Us Feel A Little Less Lonely

No show is perfect, and the creators of FRIENDS are the first to concur. Still, let’s not forget the good the show has done. For one, it’s presented the reality of same-sex parenting—Ross’ ex-wife Carol and her life partner Susan—with supporting characters that helped propel the show to receive two GLAAD (Gay & Lesbian Alliance Against Defamation) Media Award nominations and one win for Outstanding Comedy Series. The portrayal may have been problematic at times, but it’s easily paved the way for better queer presentation in media.

TL;DR—we all love FRIENDS, but they honestly could have done better.