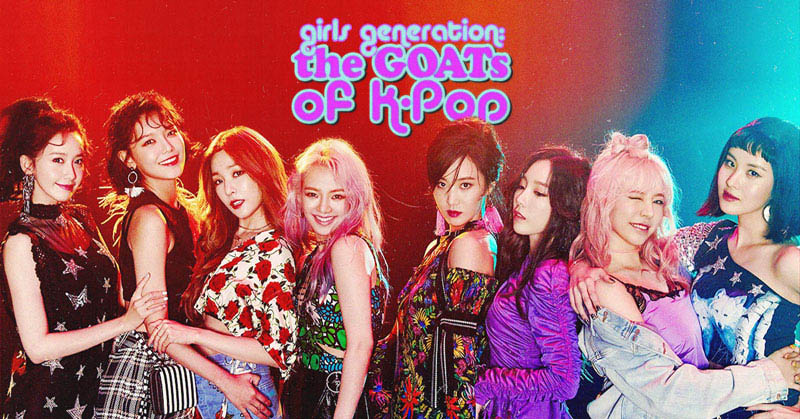 Why Girls’ Generation Are the GOATs of K-Pop

Despite the influx of new talent that debut yearly in the K-pop industry, it would be easy to assume that “once-popular” acts will have to turn in their crowns sooner or later. But that isn’t the case for K-pop icons Girls’ Generation (or SNSD), who remain forever wedged in the psyche of Hallyu. Taeyeon, Tiffany, Sunny, Sooyoung, Yuri, Hyoyeon, Yoona and Seohyun are long-standing Queens whose rule over the gals, guys, theys and gays already outdo actual royalty. Because despite each member going off doing their own things as soloists, actresses or low-key celebrities, any mention of Girls’ Generation would sure stir something in those who know their impact.

Five years since their last release, the eight-piece group celebrates their 15th anniversary with a much-awaited comeback and a full-length album called FOREVER 1. The 10-track record contains the title song of the same name and nine other B-sides reminiscent of Girls’ Generation’s lengthy discography with a touch of maturity. The girls, always sharp with their synchronization and choreography, and with vocals that hardly miss, return strong.

RELATED: K-Pop’s Second Generation is Coming Back, And It’s the Best Kind of Whiplash

While GOAT (Greatest of All Time) is often reserved for sports icons and athletes, Girls’ Generation could be deemed the same in K-pop. Because honestly? No one does it like them. So here’s why they deserve the title:

Let me nip it in the bud: Girls’ Generation’s impact is a product of their hard work, not a title spoonfed to them despite hailing from Hallyu giant SM Entertainment. In 2007, Girls’ Generation debuted with the innocent and optimistic Into The New World amid a male-dominated industry, but it didn’t make them a smash hit. They even experienced the ruthless black ocean during their rookie years. The tides only changed when the addictive and upbeat Gee came. With the members (read: mannequins) in colored skinny jeans running around a closed store, this song pulled Girls’ Generation up the charts and further established them as an act worth looking forward to.

But the girls marched further into fame with their hit single Genie, dressed in clean, pristine military uniforms. Anyone that’s been around long enough knows that this song changed their careers for the better. All the more that it also helped start the Hallyu wave in 2009, which took over the world by storm. Since then, Girls’ Generation continued providing hit after hit, with Oh!, Run Devil Run and more. They even brought in I Got A Boy, a song deemed the “Bohemian Rhapsody of K-Pop” due to its unique structure of different tempos and genres that merge at the end.

With constant hits, Girls’ Generation always manages to transform and adapt to their concepts flawlessly. May it be the glamorous, New York cab-inspired ensembles for Mr. Taxi or the sweet, ‘20s-era retro realness of Lion Heart, they always know what they’re doing.

RELATED: Nine New Tracks to Check Out on Spotify: August 2022

One can’t deny the high numbers and records broken by Girls’ Generation during their active years, but their impact even during their extended hiatus is incomparable. At any mention of the group of their songs, K-Pop idols scramble to dance Genie in variety shows proudly. Some show off their skills by covering Gee, never living out the iconic “Listen, boy, my first love story” intro. Various girl groups even cite Girls’ Generation as their biggest inspirations. So, they most definitely raised this era’s young idols and fans on their backs.

But perhaps one of the dearest, most material impacts Girls’ Generation has on South Korean society. Their debut track, Into The New World, became a rallying cry for change. From the protests against former President Park Geun-Hye to becoming the unofficial anthem for Pride Month, Into The New World has turned into a song for solidarity. Tiffany even appeared on LGBTQIA+ creative collective NEON MILK’s rendition of Into The New World for their 2021 Pride Campaign. In a conservative society like South Korea, having one of the biggest K-pop icons siding with you is a massive feat.

In all honesty, the enduring legacy of Girls’ Generation wouldn’t be as powerful as it is without the members and their relationships. After all, we believe that work stays work, and our coworkers only exist in our lives for a specific time. But even with their endearing banter—that many can misunderstand as mean-spirited—everyone knows that each member of Girls’ Generation looks out for the other. The members constantly interact with each other, support each other’s solo careers and celebrate birthdays together. Everyone can see the strength of their sisterhood. Despite the abrupt and confusing exit of Jessica Jung in 2014, the members of Girls’ Generation soldiered on. Some fans even remain optimistic that they’re all in good terms off camera.

While the current chapters of their lives require individual growth and time apart, Girls’ Generation always finds their way back to each other, a task many struggle to do years later. So, in an industry that deems seven years a long enough timespan for a group to flourish, here comes Girls’ Generation, who remain powerful for twice as long. And that’s precisely what makes them the greatest of all time.