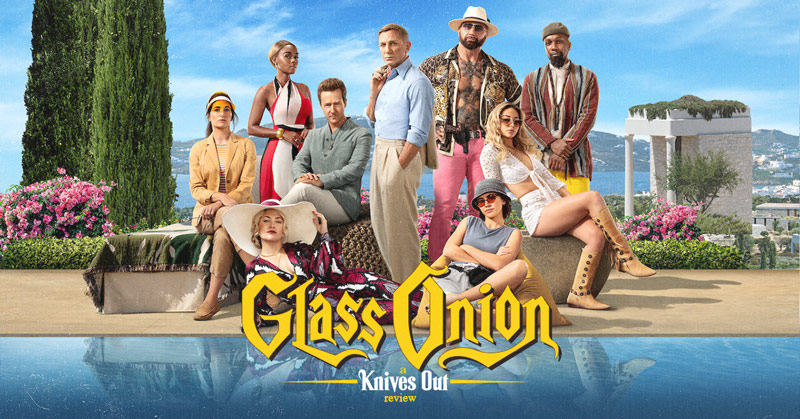 “Glass Onion: A Knives Out Mystery” is a fitting second chapter

As we wind down to end the year, streaming giant Netflix has been on a roll. They dropped Glass Onion: A Knives Out Mystery, Emily in Paris S3 and Alice in Borderland S2—among others—all in the same week.

Personally, I had been looking forward to Glass Onion for a while since I thoroughly enjoyed the theatrical, offbeat elements of the original Knives Out—the first instalment of the murder-mystery franchise. It was a neat and fun film yet still understated and relatively small in scope.

Glass Onion: A Knives Out Mystery takes things up a notch (or a hundred), elevating it to certified blockbuster territory. To put it simply, Glass Onion is quite a ride, and an extremely fun one at that. It maintains the campy, quirky, self-aware absurdist tone of the first movie but on a much grander scale, complete with the anticipated twists and turns one now comes to expect in a modern-day, Agatha Christie-inspired detective story.

Unlike the first movie, which revolved around a dysfunctional but wealthy family in their family home, the second is more epic—set in a billionaire’s sprawling estate on his own lush Greek island. The cast is more dynamic, too. Daniel Craig reprises his role as thick-accented detective extraordinaire Benoit Blanc, showing off his range as a thespian. (In a year’s span, Craig went from world’s most famous spy to the world’s most famous detective.) Edward Norton plays the role of douche-y tech bro Miles Bron, who has amassed an Elon Musk-esque fortune through Alpha, an online network fusing data, news and cryptocurrency. He invites a whole gang of old friends, now celebrities and fellow “disruptors,” to his private island, which is complete with a titanic domed building called the Glass Onion for a murder-mystery themed party. Guests include politician Claire Debella (Kathryn Hahn), supermodel turned designer Birdie Jay (Kate Hudson), men’s right activist and Andrew Tate-like Duke Cody (Dave Bautista), scientist Lionel Toussaint (Leslie Odom Jr.) and—most shockingly of all—the vengeful Cassandra Brand (Janelle Monáe), who came up with Alpha but was booted from the company by Miles without a penny to her name. Benoit Blanc turns up, apparently uninvited, but is welcomed anyway and, lo and behold, he unravels things and saves the day.

This movie is equal parts comedy and mystery, with audiences likely to theorize throughout the two-hour long romp about whodunit, or to what degree the inevitable twist will be. That’s part of its brilliance; it may be ludicrous and excessive, but it captivates, is consistently unpredictable and, well, mysterious. It’s regularly funny in a satirical kind of way, often taking jabs at vapid influencer culture, name-dropping tech bros (yes, they are now a very real cultural stereotype) and narcissistic plutocrats. It’s well-written with plenty of understated humor, intriguing us from beginning to end without losing steam.

I’ve come to recognize that casting makes or breaks a film or TV series (case in point: the near perfect cast of The White Lotus Season 2). And it’s here where Glass Onion: A Knives Out Mystery shines. Janelle Monae stuns as the disgruntled ex-business partner to Miles; Edward Norton maintains his trademark likeability but is also profoundly insufferable as billionaire Miles Brand; Kate Hudson, who has been somewhat quiet of late, dazzles as an insipid fashionista; meanwhile, Fil-Am Dave Batista’s character embodies internet toxic masculinity—tremendous mindfulness from someone with deep roots in the world of testosterone and steroid-filled pro wrestling. As a bonus, there are some tremendously random cameos by A-listers, seemingly meaningless (or are they?) to the plot, but somehow hilarious nonetheless.

True crime may be the foremost genre of murder content these days, but don’t be surprised if fictional crime led by the likes of Knives Out puts a dent on their dominance. Glass Onion is pure pop-corn flick gratification and fun—two aspects that will never not appeal to a very wide-ranging audience. Writer-director Rian Johnson has successfully pulled off two very effective murder-mystery movies in a row. Now that a third movie has been confirmed, will he sustain it? We’re willing to bet on it. Regardless, Netflix executives must be pretty content with this latest victory.

“Glass Onion: A Knives Out Mystery” is available for streaming on Netflix.