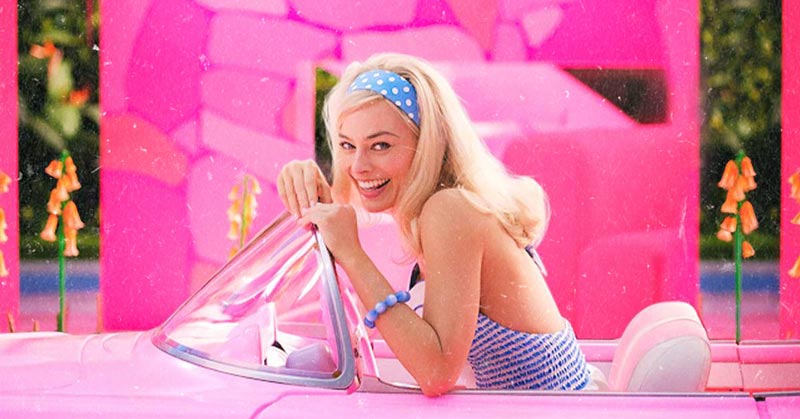 We know you’ve seen it. Fortunately, our quiet Saturday (on this side of the world, at least) was interrupted when Warner Bros. suddenly dropped the trailer for the highly anticipated Greta Gerwig project: Barbie. The movie stars Margot Robbie as the titular doll of our childhoods, with Ryan Gosling as Ken and Shang-Chi and The Legend of the Ten Rings star Simu Liu as another Ken. Robbie’s doppelganger, Emma Mackey, is confirmed as a cast member in the film and might be one of the doll’s siblings: Skipper, Stacie or Chelsea. Her fellow Sex Education co-star, Ncuti Gatwa, joins her as—you guessed it—another Ken. Overall, it’s a star-studded affair.

The teaser trailer for Barbie starts differently, with the sunrise as the backdrop and a disembodied voice explaining that before our favorite blondie came along, all dolls were babies. Little toddlers play with porcelain infants before they come across Barbie’s legs for days. Finally, they chuck the porcelain dolls and fawn over Margot Robbie’s character, dressed like the first-ever doll issued by Mattel. And then it hits many of us—it’s seemingly parallel to the opening scene of 2001: A Space Odyssey.

The immediate collective thought then sinks in: we already love this movie.

What’s the plot of Barbie?

According to multiple sources, like British Vogue and IndieWire, the movie follows a doll living in Barbieland who finds herself in exile due to her imperfections. This Barbie goes off into the human world to find true happiness—with some difficulty. And while these crumbs make it sound pretty cliché, we aren’t judging it just yet. Many of the teasers by the cast almost say the same thing: the film is unexpected. But, of course, just because it’s all pink and decked out in the supersized universe of our kitschy, campy childhoods doesn’t mean it can’t shock, right?

But is it a sob story or a comedy? According to GamesRadar, Emma Mackey tells print magazine Total Film, “And [Barbie]’s a comedy, thank God. No crying in this film! Let me tell you that. No crying!” So we’ll hold on to that, Emma—we better exit theaters out of breath from all the laughs.

Who else will appear on Barbie?

Aside from Margot Robbie and a diverse lineup of Kens, Will Ferrell joins as the “insensitive” Mattel CEO. In addition, SNL alumnae and iconic comedian Kate McKinnon joins the cast. With her and Ferrell alone, we can bet that the humor in this movie might just be off the charts. Others include Ugly Betty’s America Ferrera, Emmy nominee Issa Rae and the poster boy for awkward individuals, Michael Cera. Yes, you read that one right—the Superbad star is in the project. An unlikely combination, but probably something that will work knowing how everyone is excited about this movie.

RELATED: The Many Ways to Wear Viva Magenta: 2023’s Unapologetic Color of the Year

Life’s not all fantastic, though!

While everyone loves the Europop hit Barbie Girl by Aqua and believes that it fits perfectly in the movie, we’re sad to report that it won’t appear in the film. Ulrich Møller-Jørgensen, manager of Aqua lead singer Lene Nystrøm, tells Variety, “The song will not be used in the movie.” On the other hand, Warner Bros. has not commented on the statement. It’s important to note that since its release, Aqua has encountered some bad blood with Mattel, the creator and owner of the Barbie brand. The band’s North American record label was sued by Mattel, although the case was ultimately dismissed.

Nonetheless, we can’t wait for the next trailer to give us a glimpse of the plot. Why is Barbie exiled? And why is there a multitude of Kens? Only time will tell.

Barbie will premiere on June 21, 2023, in the United States. Keep your eyes on this space for updates on when it hits Philippine theaters.