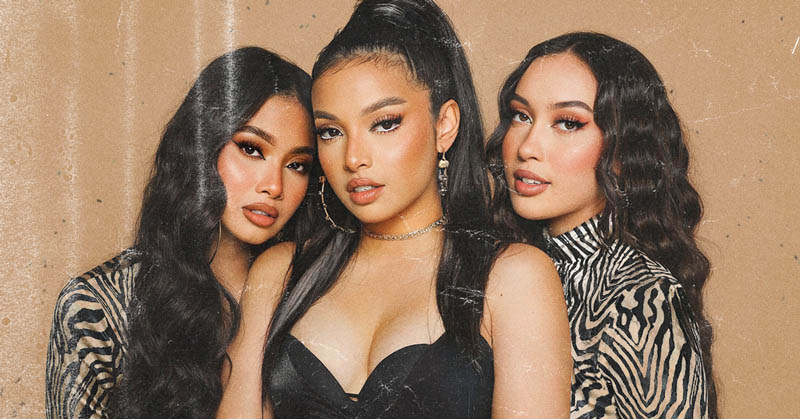 Meet H3rizon, the New Filipino-Australian Girl Group on the Block

We’re all ears on Bernie, Gabby and Tiara

There’s something about the 90s R&B girl groups that have us coming back for more—a reason why the 1990s still count as one of music’s “golden ages.” We still lose our minds over Beyoncé bringing Destiny’s Child out for Beychella, SWV’s Weak suddenly got its moment on TikTok and TLC’s Waterfalls still has a chokehold on us. But through the years, society has convinced us that R&B girl groups ended in the 2000s. However, some new girl groups are here to prove us otherwise. One of the acts making serious waves is the Filipino-Australian trio H3rizon.

With jaw-dropping looks, coordinated outfits, pitch-perfect harmonies and smooth moves, Bernie, Gabby and Tiara have the makings of an iconic girl group. The trio often operates with synchronization and balance that shows how their chemistry’s through the roof. TBH, we’re pretty sure that their over two million TikTok followers would agree, too. They first met as pre-teens, thanks to the tight-knit Filipino community in Australia. Fast forward to now, when they get to make music, create art and perform with their best friends. We’re not going to lie—this is honestly the dream.

Much like the acts we grew up with, H3rizon sings about love, empowerment and anything under the sun with their own fierce, feminine flavor. Yes, that even includes turning an uncomfortable personal experience into a song—F YOUR FLOWERS.

We get to know the new Filipino girl group on the block in this Wonder exclusive.

RELATED: PARADISE RISING’s “semilucent 3” Is a Hypnotizing Foray Into the Alt-R&B Scene

Wonder: It seems like the concept of 90s-era R&B girl groups is coming back, with the likes of FLO, Chloe x Halle and, of course, H3rizon stepping into the spotlight. So what made you guys want to explore performing in a group?

Bernie: We all have a very strong mutual love and respect for girl groups, especially from R&B music. We have a lot of respect for the ones who preceded us, like Destiny’s Child, SWV and TLC. They set it up for us and paved the way for future girl groups like us, FLO and Chloe x Halle, so we’re happy to join the scene with these amazing and iconic acts.

W: So why name yourselves H3rizon?

Gabby: We were actually inspired by a quote, “She’s got her hands on the wheel and her eyes on the horizon.” We live by that because we want to stick to our goal of music, doing it together…

Bernie: Trusting each other, trusting the process with our eyes on the road ’til the end.

W: Do you guys have a specific role to play when you make music? Or do you bounce off each other’s ideas when you sit down to write?

Tiara: We definitely bounce off each other, we don’t stick to one person doing something. We are very, very lucky to work with many other amazing writers and producers while creating music. But we are hands-on with our craft because we’re so passionate about all the songs we release that come from us, and the people we love around us. So we start from scratch, where a producer will come and give us a beat. Sometimes, Bernie will produce a beat because she’s our producer in our little group. So we bounce off each other’s energy, all put our ideas together and come up with a nice song we’re proud of.

W: Let’s talk about your single, F YOUR FLOWERS. We heard one of Gabby’s experiences inspired the track. Can you tell us how and why it led to a song?

Gabby: Well, it came about because I came across this guy, and keep in mind that I have a mutual friend with this guy, but we don’t know each other.

Bernie: He was petty much a stranger.

Gabby: We don’t know each other, we don’t talk to each other. He kept messaging me on Instagram, but I didn’t want to talk, so I didn’t reply to him. Then I got the courage and told him, “Hey, can you stop right now? Please?” And he said, “Yeah, sure, I’ll stop messaging you.” But then he ended up sending flowers to my doorstep. So basically, he couldn’t take no for an answer. So I told the girls, we made a TikTok about it and we said, “I wanna f— these flowers.”

We wanted to put it out as a message for other people who can relate [and] other women who didn’t [talk back] it in certain circumstances. Don’t let them take over you or make decisions for you. F them!

W: Is there a deeper meaning to the song? Does it push any advocacies close to the group?

Bernie: We put the song out for anyone who could relate to it. If they went through a similar experience where someone couldn’t take “no” for an answer in any situation. And you know, you don’t want to live up to their expectations. So this song encourages them to just give it to them straight.

Bernie: Stand your ground, give it to them straight and if they’re not taking no for an answer, you have got to be straightforward and be cruel.

Tiara: Be cruel to be kind.

@h3rizonmusic don’t you just love when this happens🫠 #thejokeisonyou #trend #girlgroup ♬ the joke is on you. icarly – Kate

RELATED: Tell-tale Signs of Love Bombing So You Don’t Get Swindled on a Dating App

W: The music video employs a mix of Bridgerton and hints of flipping the conservative aspect of that era. What made you guys want to explore that?

Tiara: With the Bridgerton references, we were obsessed with the show at the time, and we loved everything about it. So we hinted at that regency era period where women were seen but not heard. The expectation of a woman back in the regency era is that they have to say yes to everything, so we used that little concept for the music video to express that message too.

With the two opposites, like the conservative [side] versus us, starting to branch out—that was like our modern approach to it. [We wanted to] break out of that stereotype and the idea you’re meant to say yes to everything. That was our moment to say, “We are who we are, these are our bodies, these are ourselves and this is our moment to show if I say no, it’s a no.”

W: As Filipino talent continues to make waves across the globe, what does your heritage mean to you?

Gabby: We’re so proud to be Filipino. We honestly wouldn’t have met each other without the Filipino community because it’s so loving and supportive here. We just want to make our fellow Filipinos proud, especially in Australia.

Bernie: It’s a strong community, and they strongly support their local artists. We met through local Filipino concerts, where we were front acts for that. And that’s how we met in the first place, so without our Fil-Aus community here, there wouldn’t be H3rizon.

Tiara: So they honestly play a massive part in why we’re doing this in the first place.

RELATED: Celebrate Filipino-American History Month with a Radio Episode of The Chosen Dozen

On the horizon (pun intended), we can definitely see this triple-threat is on their way to iconic girl group status. So it’s time to tune in and listen to H3rizon: stand your ground with F YOUR FLOWERS, or fall in love all over again with Sweet Symphony.

Keep in touch with Bernie, Gabby and Tiara by following H3rizon on TikTok, Instagram and Spotify.

Special Thanks Beat This Philippines