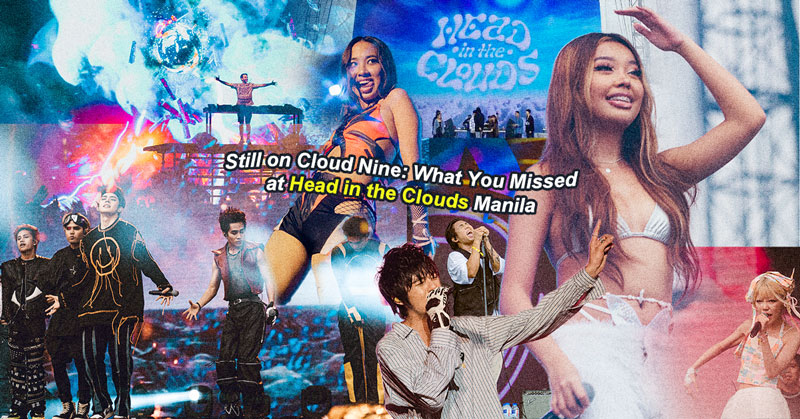 Still on Cloud Nine: What You Missed at Head in the Clouds Manila

Last December 9 and 10, eager festivalgoers flocked to the SMDC Festival Grounds to watch their favorite international and local artists perform on the expansive 88rising stage for Head In The Clouds Manila. After months of waiting, planning and surprise additions to the set list, thousands of people finally got their weekend. They chowed down on tasty food from Poblacion favorites Ebi10 and OnlyPans, drank amazing cocktails (in moderation) from Johnnie Walker and, of course, yelled (read: sang) their favorite songs and danced to the craziest DJ sets at Head In The Clouds. (We’d like to thank Elephante, Manila Killa and Zedd for the last one, TBH.)

Dreaming of attending Head In The Clouds is entirely different than actually being there, but it’s a lot more fun than stewing in your manifestations for another few years. Of course, a music festival always comes with its discomfort, like standing for hours on end, the heat in the barricades and unpredictable weather situations. But beyond the hiccups, we enjoyed the best live music. Rain or shine, we showed up and partied—hard—which made everything worth it.

A post shared by Head In The Clouds Manila (@hitcmanila)

Ahead, we give you the lowdown on what you missed in the first-ever Head In The Clouds Music and Arts Festival Manila.

Rising local R&B star Denise Julia made her big stage debut in HITC Manila by opening with Superficial Energy. The songstress then talked to the crowd about love, romance and the woes that followed them before singing Pity Ya. After a couple of song covers of Pussycat Dolls’ Stickwitu and Kehlani’s Distraction, she performed an unreleased track and a live band version of her breakout hit NVMD. Despite the still early time and the gloomy weather, Denise Julia showed up and proved why she’s worth your attention.

The most streamed local artist on Spotify, Zack Tabudlo, had everyone up in their feelings thanks to his hits like Pano and Give Me Your Forever. In between songs, he talked with the crowd, chatting about the people who inspired his ballads, even the one for which he wrote Habang Buhay. In all honesty, his songs might be amazing at the get-go, but seeing him perform live really lives up to the hype.

As SB19 followed right after, everyone found themselves in euphoric headspace as they performed What?, MANA and Bazinga!. As shown by previous concerts, Stell, Josh, Justin, Pablo and Ken are no joke on the stage, bringing the same power wherever they go. Their Head In The Clouds Manila set was just a taste of what else they have to offer. It’s impossible to believe that these boys just came from a world tour, because their energy never ran out.

Wonder Boy and rapper Guapdad 4000 got his homecoming moment. He even gave his lola, who was watching from the festival grounds, a shoutout. Of course, the Oakland-raised rapper also had his funny moments, like taking photos with fans and sharing sanitized anecdotes about his life to keep lola happy. #IKYK. But whether it’s a high from Wells Fargo or the chill beats of Chicken Adobo, Guapdad 4000 brought an unforgettable Californian experience to Manila.

The iconic quintet of ATARASHII GAKKO!, made up of Rin, Kanon, Mizyu and Suzuka, energized the crowd with their insane dances, stable vocals and unbeatable humor. We headbanged to koi geba and lost it during PINEAPPLE KRYPTONITE, as the girls traded their frilly sashes for all-black gakuran jackets. The group even had a few tricks up their sleeves, like a spiel in Filipino and Suzuka jumping off the stage to interact with eager fans by the barricades.

Milli, with all her spunk, sass and incredible energy, hyped the crowd up. And in all honesty, a few minutes on stage was all we needed to know that she and Jessi share many similarities, as seen in her sweet post about meeting her “sissy.” Jackson Wang even joined her for Mind Games in spirit, as the singer borrows a cutout from a fan in the crowd to stand in his place. The Thai icon closes her set by exercising to SAD AEROBIC, ending her time on stage with an extremely high note.

As the sun set, BOY OF THE YEAR Warren Hue performed songs off his debut album. But, of course, he didn’t leave out the classics like candy choppa (that appears on our #WonderAtThe4 playlist, just saying) and omomo punk. The rising star proves to be one to look out for not only with his effective chemistry with the crowd, but also his performance all throughout.

Japanese duo, Yoasobi, had their first performance in the Philippines at Head In The Clouds Manila. The two gave festivalgoers one of the best sets of the evening. That’s all thanks to their anthemic songs that had everyone feeling everything all at once, which doubled when Racing Into The Night came on. Ikura and Ayase looked like they had the times of their lives, singing to (and with) an eager crowd.

Goddess BIBI, known for her alluring voice and duality between “I-could-care-less” ferocity and inherent cuteness, met her Filipino fans with utmost joy and energy. Whether it was the lazy drawl of Blade, the profanity-laced KAZINO, learning “mahal kita” on the fly or pretending to scrub herself during BINU, BIBI had everyone in the crowd cheering for her. Of course, she ends her set with the iconic BIBI Vengeance choreographed by the beloved Aiki of Korean dance crew Hook—leaving all of us reeling after her set.

RELATED: Throwback: The Most Memorable HITC Performers Coming to Manila

Coming from the high of BIBI’s set is Korean-American singer and streamer eaJ. Despite only having two songs on streaming platforms, his alluring voice and raw energy drew his fans and the rest of the crowd in throughout his set composed of tracks like Car Crash, Castle In The Sky and typical story. Midway, he read a sign that said, “Jae, you made my pandemic bearable,” to which he shared a vulnerable anecdote of his own. eaJ lamented on his mental health struggles and how everything was worth it, thanks to the fact that he got to stand onstage and perform for both fans and newcomers.

As half past eight rolls in, everyone slowly gears up for the headliners despite another rain cloud looming above. The Queen and icon Jessi performed her hits like Ganji with Psy, Gucci and Zoom. Banter was as abundant as her music, even teaching the crowd to sing Nunu Nana with rolling Rs—because we’re known for that. But the biggest highlights to come out of her set was Jessi giving her fans water, bringing in a couple of them to dance Cold Blooded with her onstage and a spontaneous lesson on Filipino profanity.

Perhaps one of the most surprising and unexpected artists on the lineup for Head In The Clouds Manila is American DJ Zedd. But when the production team wheeled out his tall—very tall—platform onto the stage, one could hear a chorus of “woahs” from the crowd, which absolutely meant a major performance was about to go down. Safe to say that it was worth it, as Zedd played hits like Stay The Night, Beautiful, Spectrum and Break Free. But, of course, the best song off his set comes in the form of his multi-platinum hit Clarity that, quite literally, shook the pavement at the SMDC Festival Grounds.

Of course, everybody raced to the barricades and pits by the stage when Clo the Cloud announced Rich Brian was about to come on. One of 88rising’s biggest acts charmed the crowd, starting off strong before proceeding to sing hits like Dat $tick, Tokyo Drift Freestyle and Slow Down Turbo. He also took some time to cool off with Curious before launching into Edamame. Safe to say that the five-year wait for his return via HITC was definitely worth it.

RELATED: What ‘Shang-Chi and the Legend of the Ten Rings’ Means for Asians Around the World

The rain might’ve continued, but the audience and dedicated members of #TeamWang stayed put for the last set of the evening: Jackson Wang’s Magic Man experience at HITC Manila. Opening with the spectacular and stellar 100 Ways, the multi-hyphenate entertainer began his set with a bang, much to everyone’s glee. He also performed songs off his most recent album, like the sensual Come Alive and the hypnotizing Drive It Like You Stole It. Jackson Wang has got enough star power to make you believe that the show will go on and on, before you realize it’s already the end with Blow.

The rain poured a little harder than expected, but many braved the rain rather than choosing to sit this one out. Joji, known for his emotive ballads and sensual slow jams, opened his set with Sanctuary. But don’t let his music, like Gimme Love, Slow Dancing In The Dark, fool you because he gave the crowd a glimpse of Filthy Frank between songs. His flawless back-and-forth with the crowd, thanks to his hypeman SavageReal, made the set and downpour bearable. So if anything, his loyal fans got a two-in-one deal with this set: Joji meets Pink Guy.

It’s no secret that the singer revisits her yesteryears and honors her teenage self with Nicole, where she re-wrote and released songs from that era. As she opens her set with Before, standing on an elevated platform with an acoustic guitar cradled, we know that Niki has become a reborn pop star. She even did a costume change mid-set, wearing a glamorized version of a school uniform for High School in Jakarta. Everyone sang their hearts out to classics like Vintage and lowkey and new songs like Backburner. Then, Niki ended the night—and the festival—with a euphoric rendition of Every Summertime.

RELATED: Rising From the Chaos with 88rising’s NIKI

Head In The Clouds Manila may have had its ups and downs, but a lot about the weekend outweighed our worries. So while we still bask in the post-festival crash, we can’t help but already manifest the next one.