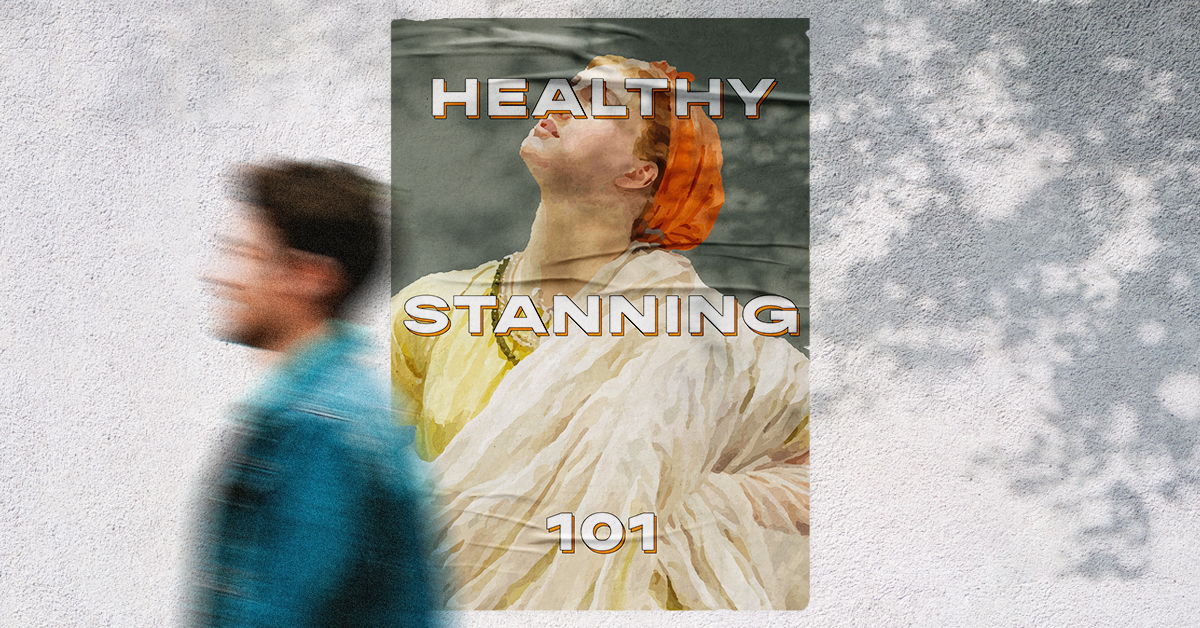 Healthy Stanning 101: Three Long-Time Fans Tell Us Why (and How) They Keep A Distance

On unplugging and pretending things don’t exist for our sanity

They say distance makes the heart grow fonder. That all the time spent apart drives humans to make each interaction more meaningful to make up for lost time. That we take the extra effort to make things memorable in order to last a few weeks apart. While this might apply to some cases of romance and LDRs, I can’t seem to say the same thing for the more tangible things we deeply love. Case in point: stanning, fandom or the well-loved series, movies and bands we hold close to our hearts.

In an era where everyone’s problematic faves drive their careers to a point of (almost) no return—think Kanye West or J.K. Rowling—fans and fandoms often find themselves in turmoil. Often, some have to grapple with the fact that the art and media they’ve consumed joyfully over the years, like stories that brought them comfort and songs that gave them reprieve, were made by people who offer their platforms to the opposite side. Some learn their beloved characters were shaped and molded by someone who spouts wrong and hateful messages.

So, how do we go on with separating the art from the artist? And how can we still enjoy them?

At this point, it’s like we’ve reached a point where consuming fandom in excess has brought more harm than good. May it be a refusal to put a device down or prioritizing our favorites over our relationships IRL. Sometimes, it can be participating in other knee-jerk reactions: canceling a celebrity or fighting someone with differing opinions online. Some of us have been there and done that. I get it; we’re protective of the things and people that bring us joy. But that can be an instance where we’re already crossing a line, or we’re putting ourselves through unnecessary stress. And that’s probably not healthy stanning.

The pandemic is already putting us through a lot. So if that thing you’re enjoying brings your more stress, maybe it’s time to consider taking a step back?

While I’ve seen all that can happen to a fandom in the past decade (I’ve spent half my life on this side of the internet, after all), I’m going to let some fellow long-time stans tell us how and why they keep a reasonable distance from time to time. It’s an inevitable rite of passage for each passionate fan: to be confronted that we need to face the bigger world beyond our safe havens.

On stanning & enjoying fandom: Most of the friendships I made were through K-pop, and most of the things we talked about were K-pop-related.

On fandom bringing more harm than good: It was probably during the latter half of college when I realized I had more important things that I needed to prioritize. I cut class to enjoy my favorite groups’ content, and there were times my exes felt like I cared about K-pop more than them. I realized that not watching new content the second it gets dropped isn’t the end of the world.

On how they keep a reasonable distance: Honestly, I still struggle with this often. I don’t think I have a specific way of doing it. My answer is simply looking away and pretending you do not see it for a little while. Close your eyes. It helps heaps.

On stanning & enjoying fandom: I was updated on everything and would spend my free time consuming content. Like other past fandoms, I also found ways to actively participate by creating content and conversing with like-minded fans. I immersed myself [so much] that I knew it like the back of my hand, but I’m very non-committal. I knew I would get bored someday.

On fandom bringing more harm than good: I won’t disclose names or media, but two of my past faves ended up being homophobic. I owed it to their age, environment and upbringing, but I distanced myself. Years later, I found they more or less retained the same view, and I was relieved to have dodged a bullet. Also, fanwars got severe to the point that I couldn’t stand it anymore. The group, music and content were all good, but other fans created tension. I logged out for a year but still checked official content when I could. I firmly believe that leaving social media doesn’t equate to leaving a fandom. I was still part of it in my heart—that much I knew.

On how they keep a reasonable distance: One thing I’ve always kept in mind, though, was that I still had a life out of it. For fictional media, I was heavily inspired [by it] but still aspired to cultivate a worldview beyond it. For real people, I put myself in their shoes. Are my actions towards them or thoughts considered cringe-y, or would my actions invade their privacy? Am I projecting my own mindset, insecurity and biases towards them? I’m a very private person and understood from a young age that real people have lives beyond what they present.

Having been a fan of many things for so long, it’s been a great learning experience. But I don’t like one thing consuming me for too much and for too long, and I’ve learned that too much of a good thing still isn’t good. So I unplug—do other things, hobbies, anything!

On stanning & enjoying fandom: With my first fandom, I was always on Tumblr. I wanted to be the first to watch and do certain things. It was a little stressful, but I met people who made it fun. Still, I remember devoting a lot of time and effort to stay updated, maintaining my social media presence or trying to get noticed. Meanwhile, I spent a lot of time learning about K-pop from friends in real life instead of just consuming content online. We would watch videos together and just generally have fun. So I didn’t feel like I was devoting a lot of time and energy to stanning during my college years. It felt more like something that would help us work and inspire us to accomplish the tasks we had to do.

On fandom bringing more harm than good: Recently, one of my favorite artists did something hurtful to a friend of theirs. They were someone I [had] followed since the early years and someone whose career I witnessed. I can say that I was there for every moment. This artist made me love music more, so it was heartbreaking for me. I remember stressing over the issue and realizing my place as a fan. We never were friends, and I never knew them in person, so why was I reacting this way? It was something I had to think about for a long time, up until now. [Us fans] joke about parasocial relationships and say that we’re self-aware, but we can’t help but feel the way we sometimes do. That’s when I learned I needed a little distance to think rationally and not just add fuel to the fire.

On how they keep a reasonable distance: It was easier before the pandemic. Since many of my real friends are K-pop stans, we would discuss K-pop in a sense [that] it wasn’t just about fanwars or the things that stress you out. Whenever there was something about our fave that we disagreed with, it was easier to rationalize and discuss with people you trusted. Many of the things we fans stress over happen online because the discussions lack nuance or a sense of the real world.

Keeping a safe space from your fav and fandom seems daunting, because why would you forcibly take a step back from something that makes you so happy? But I eventually realized that it was okay to put some distance and not be updated about every little thing. It might seem like a mindless and easy task to others, but for many people who find safe spaces online, not talking about their favorites can be difficult. So when things start getting stressful, I log out and speak to a friend about other things. Sometimes we all just need a break from the chaos of it all. We need to try to make sense of how different things are online versus real life and have discussions with real people.

RELATED: PSA: You Dan Dislike K-Pop Without Resorting to Racism and Homophobia

As much as we cling to our favorites for sanity or revert to stanning to keep ourselves together, too much of it can get to the best of us. But hey, at least you know that there’s a massive community of fans who went and are going through the same process of distancing, too. You’re not alone.

Have your own woes about fandom and stanning? Sound off in the comments below. We’d love to hear all about them.