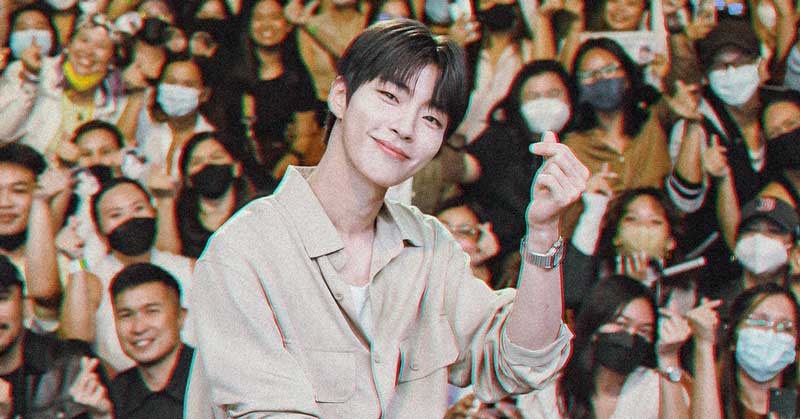 Hwang In Youp Is Happy To Be Back in the Philippines

From reminiscing his days as a student in Davao to the next big thing, the Korean actor shares all

Now that live shows and fan meetings are back and thriving, our favorite acts—Hallyu stars included—have come back to the country to bond with their fans. Last Sunday, lucky Hwang In Youp fans spent time with their famous K-drama actor. Of course, this fan meeting proved sentimental as it was the first time he met Filipino supporters, especially after the success of True Beauty and his collaboration with BYS Cosmetics.

On Living in the Philippines

Ahead of the fan meeting at the New Frontier Theater, members of the press got the chance to talk to him in an exclusive press conference. During his opening greeting, Hwang In Youp shares that he’s “happy to be back in a country that he loves.” Perhaps one of the reasons why the Philippines is dear to the actor is because he spent some of his formative years studying in Davao City. Previously known as Ryan, the actor graduated high school from the ​​Philippine Nikkei Jin Kai International School and received his BFA in fashion design at the Philippine Women’s College of Davao. Yup, he’s even got yearbook photos to prove it.

When talking about the food he misses the most, Hwang In Youp shows his love for fast food chains Chow King and Jollibee. But if you want to know the specifics, he names halo-halo, mango float and even kwek kwek as the Filipino dishes he wants to eat again. If he does have a secret vacation on our shores, we hope he gets to eat his heart out.

While many of us think that one holy grail skincare product can get us by, Hwang In Youp believes otherwise. For the actor, it’s impossible to choose a single item from the Skin by BYS collection that would help him get healthy and glowing skin. Instead, he emphasizes building a whole regime to achieve your skin goals. All the products come together and work their magic, so it’s hard to single one out.

Outside of a rigorous skincare routine, Hwang In Youp shares two more secrets to his flawless skin. First, he finishes a hot shower with a cold wash on his face. Second, Hwang In Youp shares that he religiously applies lip balm to keep them moisturized. He chalks this second bit to South Korea’s four seasons that make his lips more prone to drying. Nonetheless, we’re taking notes regardless of the season—lip balm all day, every day.

RELATED: 6 Effective Ingredients for Your Skincare

On Future Roles He Wants To Take

Since his acting debut, Hwang In Youp has tried a variety of roles. First, he played the bully in 18 Again. Then we fell in love with him in True Beauty as the edgy, sweet and loveable second lead, Han Seojun. Now we can’t help but wonder what role he’ll play after the friendly but torn Na Ildeung of The Sound of Magic and the earnest but surprising Gong Chan of Why Her.

When discussing any specific roles he hopes to try, Hwang In Youp explains that the focus is not on a particular part he wants to do. Instead, his sights remain on exploring a wide range of genres. “It’s really more about me wanting to show you my skills as a talented actor. I think that has to come first,” he explains, as translated by Sam Oh. Hwang In Youp isn’t afraid to try new things, as long as he gets to flex his acting muscles.

RELATED: Popular K-Dramas That Are Actually Adapted From Webtoons

Safe to say that Hwang In Youp’s trip to the Philippines can be considered one for the books.