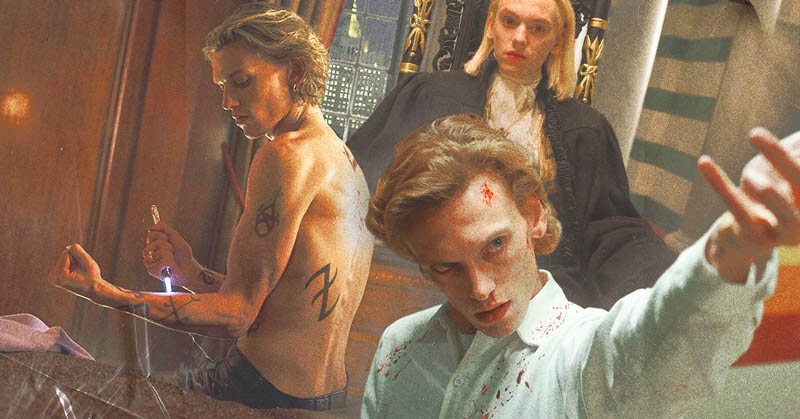 From Vecna to Jace Wayland, we crack down on Jamie Bower’s roles

Amid all the theories, reactions and general inability to move on from Stranger Things 4, the internet seems to set its sights on a new favorite: Jamie Campbell Bower. The actor, who plays 001/Henry Creel/Vecna, appears to be the fan favorite next to Joe Quinn. Maybe it’s his skill of shifting from kind guardian to twisted villain just by changing his gaze, or perhaps his off-cam personality is nothing short of ~spicy~. By “spicy,” we mean funny, cheeky and with an unhinged persona. Does #LifeIsABoxofChocolates sound familiar to you? Either way, there seems to be another great wave of love and interest for Jamie Campbell Bower.

But, of course, this isn’t the first time the world has fallen in love with the British actor. He’s appeared in several large-scale movies of iconic book adaptations, such as Mortal Instruments, Harry Potter and the Twilight saga. Heck, he even started his film debut in Sweeney Todd: The Demon Barber of Fleet Street with veterans like Helena Bonham Carter and Johnny Depp. Did we mention he also played Mick Jagger in a comedic satire? The range. As a result, his list of credits bears a lot of weight.

Up ahead, we take a deep dive into some of his previous roles and rate them one by one.

RELATED: 4 Must-Download Apps for Those Who Love to Stream

Jamie Campbell Bower’s debut was as Anthony Hope in this dark, horror musical directed by Tim Burton. Wide-eyed, curious and innocent, the film’s silver linings come mostly from his character, especially amid the film’s grim mood. His hopes to have a happy ending with Johanna happen on a good note—thankfully—which is deserving of a person roped into the Fleet Street mess. Nothing but a smashing debut for a young actor, amirite?

In the Twilight saga, Jamie Campbell Bower plays Caius, the elder vampire who’s a stickler for the laws. We only see him when the Volturi makes an appearance, but even then he doesn’t really stand out. All he does is make us uncomfortable. Maybe it’s the unflattering, pin-straight blunt bob or the beadiness of his red contacts, but we don’t dig it. Not his best villain role, but I totally get it—he’s supposed to be on the sidelines.

Harry Potter and the Deathly Hallows Part 1 (2010) and Fantastic Beasts: The Crimes of Grindelwald (2018)

Once again, the actor finds himself cast alongside Johnny Depp, playing the younger Gellert Grindelwald in Harry Potter and the Deathly Hallows and in one of its prequels, Fantastic Beasts. Well, his roles were primarily cameos, but we can’t help but marvel at the accuracy. He fits the description of a Dark Wizard with a menacing gaze, haunting aura and extremely sharp facial structure—if anything, he is the definition of a Dark Wizard.

The Mortal Instruments: City of Bones (2013)

Perhaps the role that landed Jamie Campbell Bower a horde of fangirls is his role as Jace Wayland in The Mortal Instruments: City of Bones. Starring with his then-girlfriend Lily Collins, he brought everyone’s favorite first-lead-slash-dream-bad-boy back to life. Seeing Jamie Campbell Bower on the side of the protagonist is refreshing after his slew of menacing cameos. Sad to see that the movie wasn’t renewed for a sequel because we all need to see more of him as Jace.

Playing four different roles in Stranger Things catapulted Jamie Campbell Bower into breakthrough popularity. He fully explores his acting prowess as he shifts from friendly and kind to menacing and plotting, and then to fully resentful and evil. Bower is never bothered by the heavy Vecna suit, bringing his A-game in each scene. He even made Millie Bobby Brown *really* cry during that take of her bound against the Creel house’s door. Not an act or a scene—the two of them were entirely in the moment.

RELATED: How Netflix’s Shadow and Bone improved upon the books it’s based on

These are just a couple of his roles as an actor, as he also voiced one of Thomas The Train’s friends. But aside from playing the perfect villain to a tee, Jamie Campbell Bower also wears a musical hat. As a former guitarist for Counterfeit and a successful career as an alternative singer, he’s obviously a man of many talents.