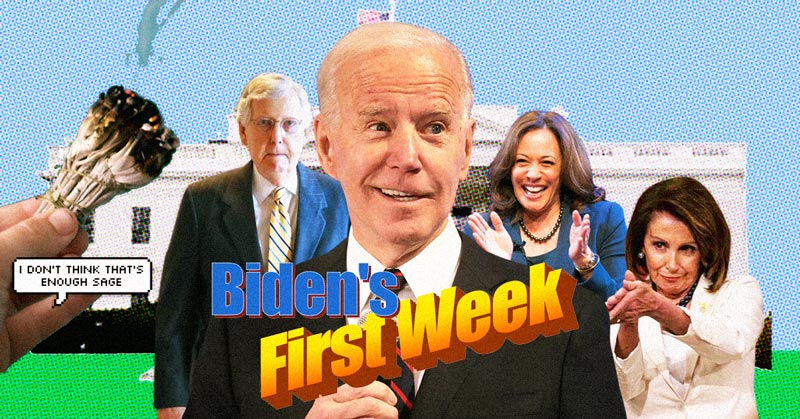 A reboot is exactly what America needs

If the insurrection was the season finale of America, then Biden’s first week in office isn’t a sequel, but rather a reboot. Sure, in comparison to the last season, it’s a bit boring, but that’s exactly what America needs after four years of Voldemort, er, I mean Trump.

The inauguration gave us many amazing moments. Our first female, African American, and South Asian Vice President, a beautiful performance from the youngest ever inaugural poet, a rainbow of stunning coats, and the greatest meme in the history of the internet.  #ThankYouBernie.

Me watching JLo sneak in “Let’s Get Loud” pic.twitter.com/OAIGrWZjJr

But while the pageantry and pomp was sparkly, the real work began with a sense of urgency to address a divided and broken country, while unspooling the mess that Donald Trump created over the last four years. And the new President is moving quickly.

Biden ended construction on Trump’s border wall. The MAGA people may have had a collective meltdown over that one. It was an expensive project that lined the pockets of Trump supporting construction firms with a ballooning budget. Pointlessly so, seeing as the vast majority of illegal residents enter the country legally and simply overstay their visas.

Another MAGA meltdown across social media occurred when Biden put the kibosh on the Keystone XL pipeline, famously controversial for being built through indigenous land and potentially harming sacred sites.

Biden overturned Trump’s ban on transgender people serving in the military and issued an executive order expanding nondiscrimination protections for the LGBTQ community.

? Awoooof! Guess who that is, looking out the door while our dad, now @POTUS, was reviewing notes before the President’s daily briefing in the outer Oval Pawffice in 2009? Our good friend, Bo Obama, pawf course! He wanted to go outside again, even though he had just gotten back. pic.twitter.com/Fgm9iRqsrd

In another heartwarming turn of events, the longstanding tradition of White House pets has returned with the arrival of German Shepherds: Champ and Major, as well as cat: Winston. Trump was the first President in over a century not to have pets and now everyone can enjoy the Biden fur babies on Twitter at @TheOvalPawffice.

Of course, in spite of all of these lovely brush strokes, there’s a lot more work to be done and it can’t be forgotten that over 70 million people still wanted Trump in office. The FBI continues to mount charges against hundreds of people responsible for the attack on the Capitol earlier in the month.

RELATED: The Day Democracy Cracked: American Insurrection at the Hands of Domestic Terrorists

The GOP is grasping at straws as the process of Trump’s impeachment continues post-presidency, while progressives are concerned that the relief of Trump being G-O-N-E, will keep Democrats from aggressively pursuing progressive action despite holding all three branches of government.

Of course the politician who had the best week, might just be Bernie Sanders. The Democratic Socialist who nearly got the Presidential nomination, has been the one truly bringing the country together with hundreds upon hundreds of memes and photoshopped genius giving Democrats and Republicans something to finally agree on and smile about. And of course, in true Bernie Sanders fashion, he turned the meme into a sweatshirt which sold out instantly and donated 100% of the proceeds to Meals on Wheels in his home state of Vermont.

While not hearing much from Trump has been a surprise (#ThanksTwitter), it’s a welcome one. America still isn’t on steady ground just yet, but at least we’re able to appreciate having a President who—whether you agree with him or not—is too busy doing his job to have time for golfing and fighting on Twitter.

The time to move forward is now. pic.twitter.com/IrUUu0bxGO