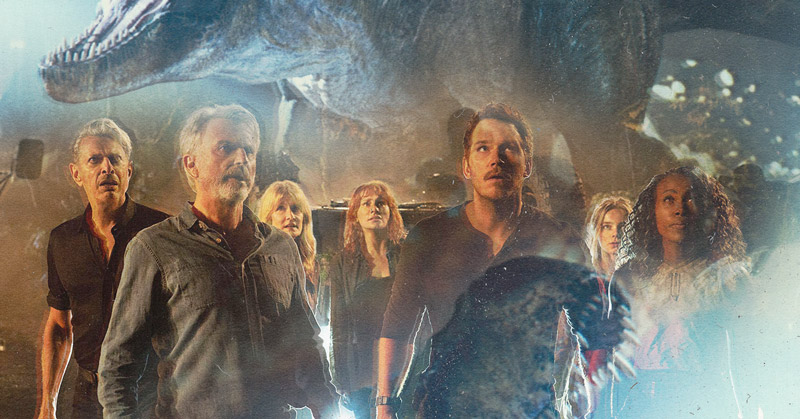 There’s something quite thrilling about seeing a film the way it was meant to be seen: on the big screen, with surround sound, and with no one asking to pause every time they need to use the bathroom. From the moment I knew that Jurassic World Dominion was showing in cinemas, I knew it would be one of those movies that deserved a theater watch.

In this chapter of the franchise—which is meant to be the last, but who knows?—the official synopsis reads: “The future of mankind hangs in the balance as humans and dinosaurs coexist following the destruction of Isla Nublar.” If I’m being honest though, that’s hardly the narrative.

More than a fight between humans and dinosaurs, Jurassic World Dominion falls under the realm of humans vs. humans, of what’s “moral” vs. what’s capitalist. In the film, Biosyn has figured out a way to manipulate their products (most important to the film, its crop seeds) to keep them safe from the mega-locusts that Biosyn themselves developed and released. So of course, our original protagonists—Alan Grant (Sam Neill), Ellie Sattler (Laura Dern) and Ian Malcom (Jeff Goldblum)—are here to save the day.

On the other side of things, Owen Grady (Chris Pratt) and Claire Dearing (Bryce Dallas Howard) are protecting their adopted daughter, Maisie Lockwood (Isabella Sermon), whose sheer biological existence (and manipulated DNA) wants to be studied by Biosyn.

The plot itself, I have to qualms with. It’s relevant and modern, albeit a little expected. Nevertheless, the threads that weave the original franchise’s cast with the new is almost seamless. I cannot tell you how refreshing it was to see Jeff Goldblum and his brand of comedy in this particular franchise once again.

What did strike me as weird, however, is that I just never believed most of the scenes. Sure, the audience needs to stretch their imagination every time they dare step into Jurassic World territory, but how am I supposed to believe that Bryce Dallas Howard, as badass as she is, could actually outrun a dinosaur? And when everyone had finally all met each other under the watching eye of a provoked dinosaur, that they survived because the dinosaur decided to just turn the other way?

Onto the good stuff: the cast is impeccable (my personal feelings about Chris Pratt aside), but I want to bring special attention to DeWanda Wise (Someone Great), who played Kayla Watts. She was one of the best decisions for Jurassic World Dominion, hands down. Strong, straightforward and believably human, she literally saves the day on more than one occasion. While we still remember Claire running around in her heels, we will collectively walk out of Jurassic World Dominion remembering Kayla flying her “baby” right alongside some pterodactyls.

All in all, Jurassic World Dominion does deserve a watch on the big screen. Maybe just leave the cynicism at the ticket counter.

“Jurassic World Dominion” is now showing in theaters. And you can get the big (and we mean BIG) screen experience at Ayala Malls Manila Bay.