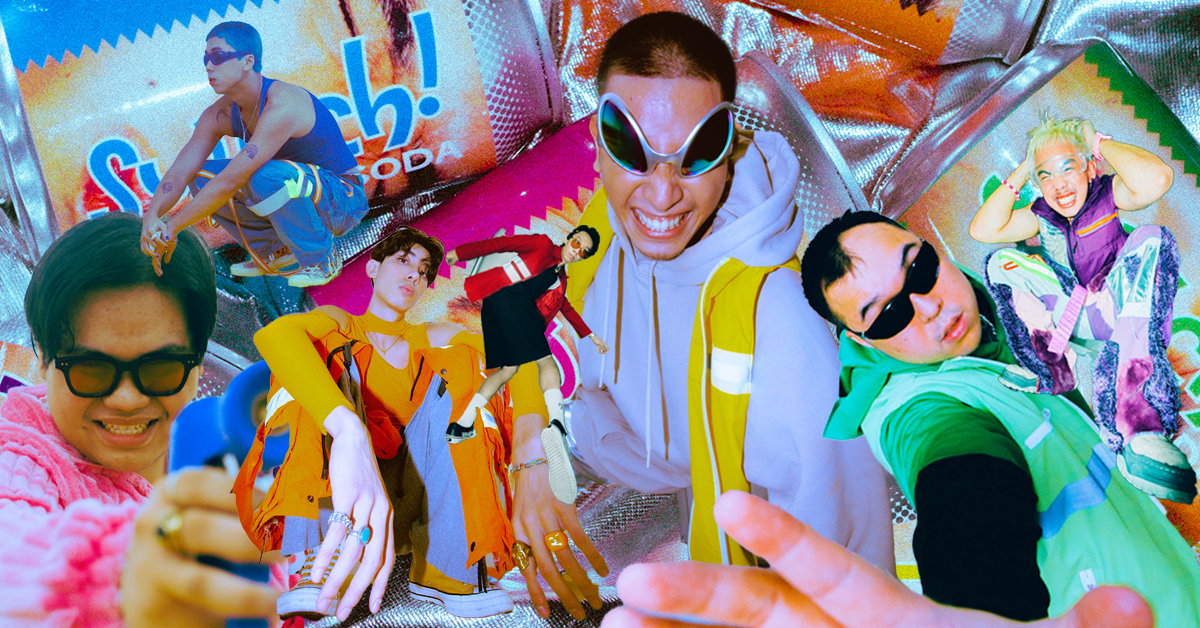 Kindred Is More Than a Supergroup, Better Than a Boyband

Besides their debut single “Switch On U!,” how is Kindred switching things up?

So. It’s Laguna, and the boys have settled in for their self-initiated artist’s retreat, a long weekend dedicated to songwriting, jamming and aligning wavelengths. Their place is partitioned into three spaces: the main space (a living room situation), the kitchen and near the kubo (hut), and in each place, different members of the seven-piece collective are conjuring and transmuting different energies. Moses Webb (AKA Slomo Says) recalls: “Sila Vince could be making this whole other vibe down by the kubo, and then Jorge and I would be making these emo punk tracks in the kitchen, and then sila Fern would be making an R&B pop song in the main place. So you could like, bounce around and get inspiration from all these places, and I used it to fuel how I was creating.” Webb described it as “a surge of creative energy” that permeated the place.

In many ways, the genesis of KINDRED can be characterized by different energies finding equilibrium. Red Bull Music Academy alumnus nouvul (Jorge Wieneke) sought to bring the magic of his RBMA experience to Laguna, and by the end of the retreat, the boys ended up with 33 plus songs. But ask anybody from the seven-man project–composed of Slomo Says, nouvul, Cavill (Obi Intia), VINCED (Vincent Dalida), Punzi (Justin Punzalan), dot.jaime (Jaime San Juan) and Fern. (Fern Tan)—and they’ll tell you that things just kind of naturally fell into place. Homies making music.

How these homies came together however is a little more nuanced. Each member of KINDRED was already an established musician in their own right, making waves in their immediate proximities. Metro Manila has always had strong scenes when it came to electronic music and R&B, thanks in no small part to the influence of groups like BuwanBuwan collective and the explosive rise of Careless Music acts. As it happens, scenes overlap and communities form. The experience of being in those scenes, and all the blessed and fraught encounters that come with it, inform the values of KINDRED.

Nouvul is considered a mentor figure by many of his contemporaries, though he doesn’t believe in hierarchies or false dichotomies, and isn’t shy about his frustration with traditional systems. “We sort of like, had to sort of shed that idea that someone is bigger and better—[a] hierarchy,” he says. “We wanted to sort of blur the lines between what’s mainstream, what’s underground. Come together and create stuff where you can bring both those worlds together to create something…even a new understanding that there’s no separation.”

Many have tried to avant-garde-ify the boyband—Brockhampton is an example that comes to mind. The ongoing renaissance of K-pop also enriches the discourse of boy groups. But as nouvul puts it, “My initial idea of a boyband talaga is coming from the 90s idea of it. But of course, knowing me, you know that I like mutating things. It’s mutated by what I am now, and what I’ve grown to be, alongside these people.”

The way KINDRED plays with the idea of the boyband, an inherently Top 40 concept, is to reference its mainstream appeal in a tongue-in-cheek way, and then make room for a more liberated experience of the creative process, grounded on the value of kinship and unimpeded by the stuffy demands of boardroom executives.

RELATED: Four’s A Lean, Mean Crowd: NUCKSAL and CADEJO Open Up About “Sincerely Yours”

Still, KINDRED wouldn’t need the extra machinery–their marketing is ridiculously fresh. Thanks to photographer to the collective Annika Sy, and with boyband manager Janine Sevalla and dot.Jaime also assisting with marketing, KINDRED made a big splash on social media with super colorful posters and a tour announcement that actually traveled pretty far across the metro. The way Sevalla puts it, “Kindred Productions”—the business aspect of the project—”is the body, and Kindredism is the soul.” And man did the body do a lot of moving in the past few weeks. Different legs of the tour highlighted individual members, and the venues represented the places where each of the boys have roots.

The soul, though? We can catch a glimpse of it via the band’s debut single, Switch On U. It’s the sonic equivalent of an artist’s paint palette, caked in a hurricane of brush strokes, colors running over each other, indicating a process as captivating as the resultant product. In the track, the boys show off their versatility with hooks, literally switching things up with dynamic cadences. Electronic, R&B and emo-adjacent sounds come together to form a track greater than the sum of its genre components.

The track is a stellar introduction for anybody wondering what KINDRED’s whole deal is. The project is a gestalt expression of some of Manila’s most exciting pop, R&B and electronic styles coming together, grounded on the value of community. Fern. describes the project thusly: “The way [KINDRED] transformed to what it is now is really because of the values that I believe Jorge put into all of our heads. And it just turned into something bigger than just music production, something bigger than just a service.”

Keep tabs on KINDRED by following them on Instagram.