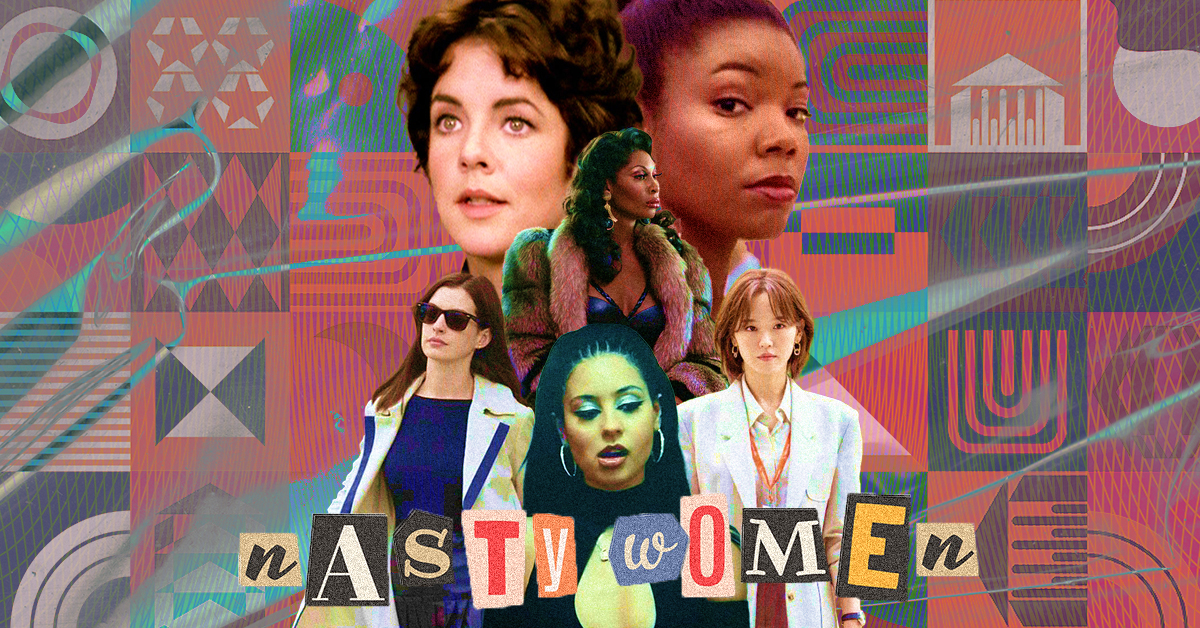 Let’s be honest. The world still has a bone to pick with unapologetic and loud women, even in the year 2022. Despite numerous boss ladies taking up space in their respective fields, the culture of misogyny continues to try and bring us down. The media still frames Nasty Women as antagonists, as villains. They tell us that we should be their complete opposites when we become adults. But sooner or later, women discover that there’s nothing wrong with channeling the Head Bitch In Charge. If anything, these characters can teach us a life lesson or two that we can apply as we grow.

Ahead, we list down the lessons these fictional nasty women teach us. Not only tips on how to be a stone-cold boss who gets things done, but also as a woman who gets through life. Nasty Women have surrounded us since time immemorial, so it’s our turn to give them the spotlight.

Life Lesson #1: The thing about confidence, it can be faked and developed along the way

Sure, Maddy rears the worst of her personality in both seasons of Euphoria, but we can’t help but admire the way she uplifts her friends in season two. She can get violent and messy, especially when it’s about protecting herself and asserting dominance. But one of the best facets of her complex personality is that Maddy can be gentle. She gives Kat relationship advice, not to mention the scene between her and Lexi. Maddy tells the younger Howard, “90% of life is about confidence. And the thing about confidence is that no one knows if it’s real or not.” Although we all might approach the topic differently as we grow older, Maddy did make some valid points.

Life Lesson #2: It’s okay to be needy and vulnerable

The first time the world met Elektra Abundance in Pose, she was nothing but a cold-hearted bitch. She was always putting her children down to the point that she drove Blanca to establish her own house. She was wealthy, independent and cutthroat. But as the seasons went on, the tides changed. Elektra eventually learns to trust and rely on other people, especially when life knocks her down. We understand that it’s okay to ask for help and be vulnerable through her story. Help is not a prize earned, and the lows of life are not payback from the universe. We can stay a Head Bitch In Charge while seeking help from others. Just don’t forget to give back—in your own way, too.

Life Lesson #3: Keep doing you; the good, the bad and the vulnerable

Grease was the product of its time, so it’s not exactly the most progressive title out there. (We’ve reheard Summer Nights, too, and that was whack.) But Stockard Channing’s Betty Rizzo? She’s one of the blueprints of the Head Bitch In Charge. She’s tough, unapologetic and intimidating. From her clothes to her partners, Rizzo does whatever she wants on her terms and never for anyone else’s approval. She has no time for norms and refuses to fit the cookie-cut Mary Sue-ness expected of women. But even if Betty Rizzo’s another fictional Nasty Woman, she basks in her vulnerabilities, too. She’s a complex human like all of us, and is not just a one-dimensional stereotype. Not convinced? Give There Are Worse Things (I Could Do) another listen, and then we’ll talk.

RELATED: Dear Woman, We Have Something To Say

Jules Ostin might not be the most cutthroat girl boss role Anne Hathaway embodied (Witches’ Grand High Witch says hello), but she’s arguably the most relatable. So when an opportunity to lighten her load and relinquish her duties to an older, more capable CEO presents itself, she feels torn. She knows deep inside that no one can grow About The Fit like her, but many people don’t think she can juggle all her responsibilities. While most of us aren’t young CEOs-slash-founders of a fast-moving e-commerce company, Jules teaches us how to act when we reach the crossroads of difficult decisions. She made one thing clear when she needed to choose: trust your gut, even if it means going against the current.

Life Lesson #5: You make your own destiny

Kim Han-Na’s Won In-Jae is a complicated woman, which is expected given her family history with Seo Dal-mi and choosing to live with her mother and rich stepfather. But once her so-called family plots to oust her after all the hard work she poured into the company, In-Jae knows it’s time to let go. So instead of moping or groveling, she takes it as a challenge. In-Jae actively steps out of her stepfather’s name, money and connections—and she does a damn good job at it, too. So, sure, she’s back to square one in Sandbox, but it all works out in the end. And she’s still a boss on top. In-jae refuses to let her past define her, so she works to make the future work in her favor.

Isis, Bring It On

One classic Head Bitch In Charge is Bring It On’s Isis, played by Gabrielle Union. She is unapologetic, self-assured and confident. It highly fits the captain of the opposing cheer squad, the East Compton Clovers. People think that the central conflict boils down to beef between her and Torrance (Kristen Dunst), but Isis was just protecting what’s hers. I mean, who wouldn’t be? You work hard day and night to bring the best routine, only for it to get stolen and awarded. Isis stands her ground by refusing the money offered by Torrance. She and the Clovers go to their rivals’ home court to show them that plagiarism built the Toros’ decorated career in cheerleading. Isis works to level the playing ground, brings her team to nationals and wins fair and square—a triumph duly deserved.

So even if Gabrielle Union believed she muffled Isis, she still raised a generation of unapologetic Black women (and other women of color) who know how to stand their ground.

What else did these and other fictional Nasty Women teach you? Sound off in the comments below. And if you want to know your Cutthroat Bitch Spirit Animal, this quiz holds the answers.