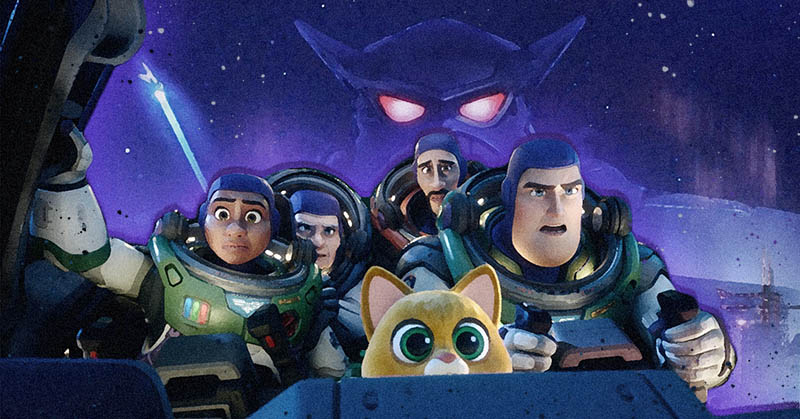 “Lightyear” Hits Harder Than I Thought It Would

Buzz Lightyear is back

When I first found out that Disney and Pixar were going to pull on our nostalgic heartstrings (again) with Lightyear, I thought I was done. I told myself no, that this was a cheap way for them to get a few bucks from their aging audience, and that the story of Andy, Woody and Buzz had closed. I didn’t need another chapter.

I’ll say it as early as now: I was wrong, and this was very much needed.

The film opens with a simple clip, with white text on a black background that reads (more or less):

In 1995, Andy got a Buzz Lightyear toy from his favorite movie.
This is that movie.

The story of Lightyear follows Buzz as a space ranger. Within the first few minutes, he makes a miscalculation that essentially strands everyone under his responsibility on an alien planet. The goal, as always, is to finish the mission, and this means replacing the damaged crystal that powers their ship. Unfortunately, each attempt that Buzz flies transports him four years into the future—which means that everyone back on the planet ages quicker than he does. (Seriously, the age thing in this movie is like a slap in the face sometimes.)

On his last (and only illegal) attempt, armed with new calculations from his trusty sidekick, the honesty adorable SOX, Buzz has finally done it. The crystal is able to successfully fly his ship, and he is thrilled to land with the good news. The trouble is, most of his original friends and colleagues are gone, Zurg has taken over, and Buzz only has junior space rangers to help him.

But despite the setbacks, the mission must be finished.

RELATED: In Celebration of Platonic Relationships: A Look Back At “Lost in Translation”

Buzz is exactly how you expect him to be: always wanting to act alone, constantly determined to finish his mission, and a little linear with his thinking. But throughout the film, he learns that everyone needs a little help, and that adjusting the mission doesn’t mean you’ve failed.

Lightyear is riddled with lessons like these. I initially thought that I didn’t need the lecture anymore; I’m 30 years old, and Andy, Woody and Buzz had already helped bring me up. But with this new film, Disney and Pixar remind everyone in their audience that, regardless of age, there will always be something worth pursuing. It might not be what we originally envisioned for ourselves, but it might just be what we need.

But more than that, Lightyear touches on the importance of human connections. None of us need to play the role of a stranded astronaut trying to find a way home on his own. We lose people, and we gain people. And in Lightyear’s colorful collection of characters—please allow me another shout out to SOX—we can’t help but believe this is the way to go.

Lightyear comes at just the right time, proving once again that we are never too mature to play or revisit our old toys and pastimes. And it’s for everyone, whether you’re introducing your child (or niece or nephew) to the franchise, or watching it for yourself, you’ll walk out with a smile on your face. The kind of smile that’s a little difficult to come by nowadays.

So do yourself and your loved ones a favor. Watch Lightyear.