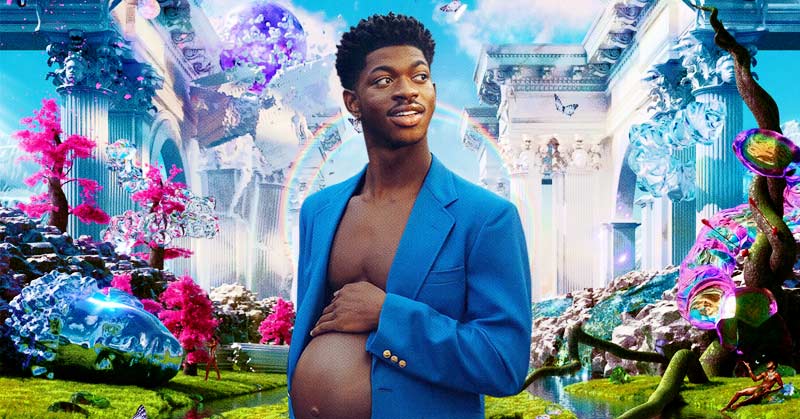 Lil Nas X Is Here and Queer, but Ventures Into So Much More With ‘Montero’

His debut studio album documents his growth in and outside of the industry, refusing to be boxed in

Who would’ve thought? The artist to give country music its long-overdue dose of new energy would be a Black, queer 20-something from Lithia Springs, Georgia. For Lil Nas X, whose genre-bending hit “Old Town Road” became the longest-running #1 single in US history, the path toward this had more than its fair share of obstructions. Case in point: Billboard praised the country hit then pulled it from its country charts because it “wasn’t country enough.” Leave it to traditionalists, in a predominantly white, heterosexual segment of the music industry, to gatekeep country music. Regardless, the road for Lil Nas X would lead to something great anyway.

MONTERO, titled after the singer-songwriter’s given name, is a debut studio album that does a lot to cement a unique place for Lil Nas X in the industry. Playful gimmicks aside (see above; he literally gives birth to his album), the intent of the 15-track project isn’t so much to push the boundaries or stir controversy, though it might appear to be the case. Now 22, a proud and out queer Black artist, Lil Nas X reintroduces himself with MONTERO—on his own terms and using his own narrative devices. He is unfazed about getting a seat at the table. He brought his own.

Co-produced by Kanye West and OneRepublic’s Ryan Tedder,  MONTERO is a sonically cohesive release that showcases peaks and valleys. The title track (and first on the album), of course, is a confident declaration of Lil Nas X’s queer identity, with nothing more to hide. It seems just like the rapper to start things this way: openly, unapologetically sexual lyrics set to sultry guitar riffs. It’s also like him to use this time to take jabs at conservative views on homosexuality. (In the music video, he takes a trip through the garden of Eden, ends up in the underworld, where he gives the devil a lap dance.)

Headline-making stunts like this, though, don’t define Lil Nas X. The journey he takes listeners on is one that speaks to the intricacies of being queer: wanting to be seen, loved, celebrated without apology, however unfiltered. This is what weaves through his upbeat fourth single That’s What I Want, where Lil Nas X goes full-tilt pop (a kind of “Hey Ya!” 2.0), and Lost in the Citadel that leans nicely into rock for a change.

Apart from the telling of his queer experience, MONTERO is a candid account of his life, covering moments that range from the evident (like his rapid rise to superstardom) to the extremely personal (life back in Georgia).

Not about to fake modesty (and why would he? He knows he’s worked hard for his successes), Lil Nas X delivers an “I told you so” aimed at his detractors, trumpets blaring, in the pep-rally perfect Industry Baby featuring Jack Harlow. Pop-rap glory in full display, too; he raps about his wins, about not stopping here and his burning desire not to be written off as a one-dimensional rapper. Indeed, it all sounds triumphant. Then comes the lows hand-in-hand with those highs: He confesses some of his darker truths, singing about the crushing pressure to always be optimizing after achieving all that he has. He sings in One of Me featuring Sir Elton John: “You’s a meme, you’s a joke, been a gimmick from the go / All the things that you do just to get your face to show.”

RELATED: Fall Apart With Kacey Musgraves’ Star-Crossed, An Offering for the Unlucky in Love

There is also the solemn gospel-rap track DEAD RIGHT NOW, which is raw and almost painful in its sincerity. Here, Lil Nas X raps about his upbringing, his broken family and having to deal with his mother’s addiction problem. Some of the battles, though, were not just happening outside, but within him, too. In Tales of Dominica, the solitary country-referencing track in the album, he sings about his inner saboteur rearing its ugly head. It gets even darker in quieter moments like Void and Sun Goes Down, which conjure up an image of a calm sunset drive on the coast, but feature lyrics like: “every win gives you more to lose,” “send me a gun and I’ll see the sun” and “but it’s much more to life than dyin’ over your past mistakes and people who threw dirt on your name.”

Given the weight of all MONTERO covers, there are instances where the thread gets lost. And it’s a little anticlimactic that it happens in tracks that enlist two equally talented female artists dominating the music industry today. Scoop featuring Doja Cat and Dolla Sign Slime featuring Megan Thee Stallion are catchy if listened to a handful of times, but they do fall flat given their single-word/single-phrase choruses that could easily leave listeners wanting more.

Perhaps this is something the sophomore album can and, hopefully, will address. Lil Nas X anyway is only getting started. And it’s been a strong start at that met with critical and commercial success. MONTERO is quite evidently a labor of love and an impressive debut album that won’t easily be forgotten—and Lil Nas X, an artist that certainly will not be ignored.

RELATED: Troye Sivan Talks About The Celebration of Queer Love With Angel Baby